The leading candidate for Israeli chief rabbi is notorious for his provocative and divisive remarks and for his call to resume Passover sacrifice on the Temple Mount. 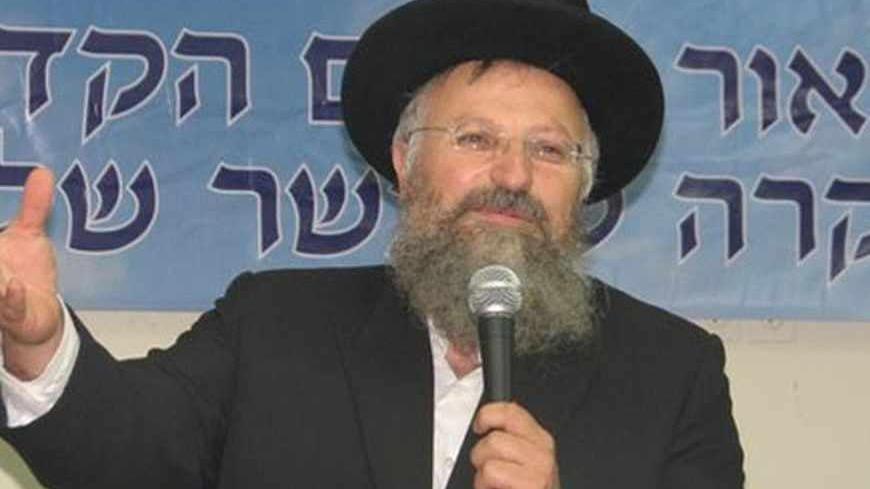 The elections for the position of Israel’s chief rabbi are drawing near, and the country is in an uproar. Well, actually, the country is totally indifferent, but the politicians and the religious wheeler-dealers are beside themselves. For months this imbroglio has been keeping every officeholder in the religious parties and the rabbinical establishment busy, leaving the rest of the public yawning and uninterested. It would be only natural for elections at an organization such as the chief rabbinate, which in any case excels mainly at creating jobs for politicos and the well-connected, to interest those who stand to gain something from them. Nevertheless, the indifferent and the secular among us in the Israeli public would be well advised to take an interest in events taking place in this arena.

Take, for example, the town of Safed's Chief Rabbi Shmuel Eliyahu, who is running for the position of chief Sephardi rabbi. Last week, the website "61," which is identified with the left-wing, compiled a one-page list of choice remarks made over the years by Rabbi Eliyahu. It’s a fascinating document, exposing the dark, racist persona of the man who enjoys sweeping support from HaBayit HaYehudi, the party headed by Economy and Trade Minister Naftali Bennett, which since the January 2013 general elections has been exposed as less the home of moderate Knesset member Uri Orbach and more as the home of radical Knesset member Uri Ariel.

An additional scandal is the fact that Eliyahu, in his job as a municipal rabbi, continues to get his pay from the Israeli taxpayer.

These are some of the remarks made by the rabbi, who probably hasn’t heard the saying of the ancient Jewish scholars: “Scholars promote peace in the world.” (Talmud, Brachot Tractate)

About pilgrimage to Temple Mount: Passover sacrifice must be renewed on Temple Mount. Jews are obliged to ascend Temple Mount. Those avoiding this obligation risk ''death by heaven,'' and bring harm on the entire world.

About homosexuality: ''These relationships are opposed to life and those who don’t bring life, bring death. Many diseases have resulted from such relationships. This disease must be cured.''

About renting apartments to Arabs: ''The Bible forbids selling a house or a field in the Land of Israel to a non-Jew. As is well known, following a sale or rental of one apartment, the value of the other apartments goes down. Anyone who sells to a goy (gentile) should be blacklisted.''

And it goes on and on, a collection of defamatory sayings and rulings reflecting a hatred of fellow men. The attorney general will now have to decide whether Eliyahu’s statements preclude his running for the post.

The existence of such venom-spewing rabbis in the Israeli public should come as no surprise. We have long known that our clerics find it hard to practice what they preach — that “decency precedes the Torah” (Midrash Leviticus Rabbah 9:3). The truly amazing thing about this affair is the acceptance by the religious Zionist public and the party which represents them of Eliyahu’s candidacy for chief rabbi. Dismay seems even greater when reflecting upon the amplitude of emotions and resistance provoked and still ongoing within the same public when faced with the candidacy of Rabbi David Stav to the position of Ashkenazi chief rabbi.

The most veteran of religious Zionism’s rabbis tried with all their might to torpedo Stav’s candidacy. HaBayit HaYehudi’s Knesset faction got involved in an acrimonious debate on the subject that threatened the leadership of Naftali Bennett, and despite the fact that a decision had already been made in the party to support Stav, many among the leaders of the religious Zionist public will do their utmost until the last minute to prevent his election.

And what is Rabbi Stav’s great sin that stirred up such a rebellion against him? Well, he is perceived as being moderate, heaven help us. He heads the organization of Tzohar rabbis, which devotes much of its activity to bringing Israelis closer to Judaism by presenting its pleasant, liberal aspects. It appears that such “grave” activity cannot go unpunished. One can be sure that Eliyahu won’t be caught doing such things.

The great irony is that after all is said and done, the religious Zionist candidates for the positions of chief rabbis are not doing as well as the ultra-Orthodox candidates for the jobs. This is especially interesting given the fact that the ultra-Orthodox have nothing but contempt for the Israeli chief rabbinate and refuse to rely on its rulings. Their attitude toward this establishment is so negative that the candidate they chose to head it is incumbent Chief Ashkenazi Rabbi Yonah Metzger, who would hardly be considered a great scholar and a man of good deeds, but on the other hand is considered a suspect in a series of criminal violations and other wrongdoings.

If, in fact, ultra-Orthodox rabbis are chosen for the jobs, or actually any other rabbi but Stav, we are assured of the continued, anomalous status quo which has been in existence for decades. The chief rabbinate will be controlled by ultra-Orthodox rabbis or nationalist ultra-Orthodox rabbis who will keep issuing rulings and putting up fences, the wheeler-dealers will keep partying, and the real clients of the rabbinate — young couples wishing to marry, business owners seeking a certificate of Kosher-ness, people wanting to convert and all the rest — will have to keep adjusting themselves to an insensitive and isolated establishment, in the hopes that in another 10 years the rabbis chosen to lead this ossified body will make it slightly more tolerant and relevant.

The chief rabbinate, which is mandated by the Israeli government to handle all interface points relating state and religion, is a monopoly — one which does not provide any services to the ultra-Orthodox, and hardly concerns the Nationalist-Religious camp. Those who do not practice Judaism are actually the ones in need of the chief rabbis. Rabbi Stav wished to make this system more efficient, making the encounter between the system and the secular public more agreeable, but his desire for change was met with a wall of objections. As far as the religious establishment keepers are concerned, the chief rabbinate will continue to do everything but helping those who need its assistance.