The movement to rebuild the third temple expands, with a first ever course to prepare the priests for the offering rituals, and with prefabricated models for the third temple's modernized artifacts. 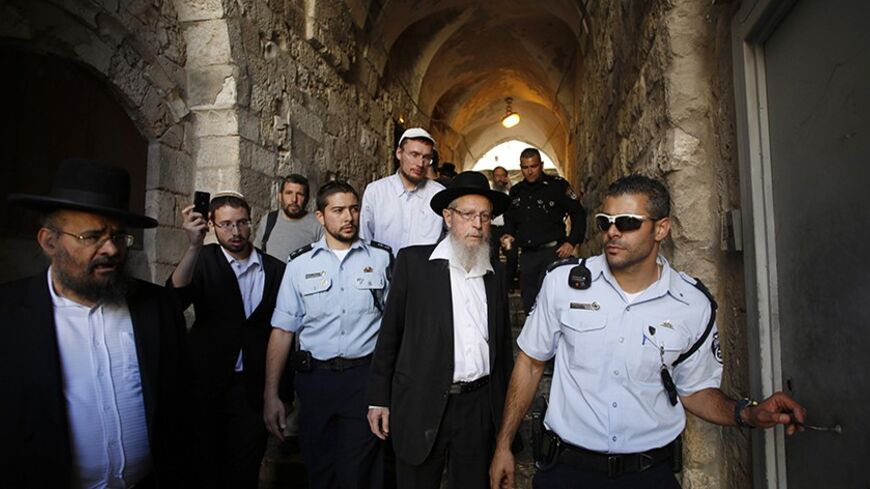 On April 10, at 5 p.m., hundreds of Jews will gather at the Maimonides rabbinical institution plaza in the Kiryat Moshe neighborhood in Jerusalem and start learning the Jewish laws of Passover. Rabbis and experts, including Rabbi Yisrael Ariel, the head of the Temple Institute in the Old City of Jerusalem, the leading body preparing for the establishment of the third temple, will teach the audience the laws of the Passover sacrifice. Alongside Ariel, the ritual slaughterer (shohet) Rabbi Yehudah Giatt will teach the audience about the unique elements of the slaughter of the Passover sacrifice. After the lessons, the real thing will start: the simulation of the Passover sacrifice.

The timing of the gathering isn’t coincidental: This was the date on which the people of Israel were commanded to take a lamb and sacrifice it, before the exodus from Egypt. The ceremony on Thursday will be, in Israel Defense Forces (IDF) lingo, “practice with live fire.” Slaughtering lambs, sprinkling their blood on the altar by priests dressed in kosher priestly garments and roasting the lambs, with their heads, legs and innards. Just as God intended.

This isn’t the first time that the "Association of Temple Organizations" will hold this activity, but this year the practice drill and re-enactment of the Passover sacrifice will be carried out by the students of the school for priests, Nezer Ha-kodesh, which started operating this year. The priest school intends to train the hundreds of priests that would be needed to work at the third temple; many Jews endeavor for its establishment in Israel today.

Ten students, who got to the priests school by word of mouth, paid 1,000 shekels (some $290), a relatively small sum, for twice-weekly lessons, three hours each, that teach “how to be priests.” The director of the school, Rabbi Yehoshua Friedman, hopes that the school will be more properly publicized next year and that more students will arrive. “The rabbis say that the minimum necessary is 13 priests in the temple to carry out the mandatory sacrifices. If you’re talking about a fully operating temple, where people bring their own sacrifices, it’s a place where hundreds of priests work daily,” he says. “In the days of old, a father and grandfather would teach the grandson and son how to be a priest, the commandments and laws. Today, they have to take a course. The prayer to establish the temple has no meaning if we don’t actually prepare for it. Think what would happen if tomorrow you got a functioning temple and don’t have priests.”

There are a great many laws for the temple, some of which have been forgotten and faded over the years: how to use incense, how to light the holy menorah, how to sanctify hands and feet, and of course, how to sacrifice. “The priests themselves come with requests to learn one topic or another. We are also learning as we go how the course should look. The students are very practical and focused,” explains Friedman.

At the Temple Institute, researchers are working hard to relearn the laws as well as study the architecture, location and necessary tools. “One of the unique elements of the course,” says Friedman, “is the actual practice. In my course, they learned how to sacrifice birds, so we brought stuffed doves, so that the priests would learn how to hold them, how to execute the specific moves. We work on standing in front of the altar to demonstrate the action, so that it’ll become natural to them.”

For the temple people, the priests’ course is an advanced stage that follows the completion of quite a few steps. First of all is the level of consciousness. For many years, say those working to establish the third temple, religious Zionism and the State of Israel worked to focus Jewish longing on the Western Wall.

“The Western Wall isn’t a holy place,” declares Arnon Segal, a journalist who devotedly follows the preparations for the establishment of the temple. “It was meant to remove the Temple Mount from the Jewish mind. Opium for the masses.” Segal and his friends have been working in recent years to change the outlook of decision-makers: rabbis, members of the Knesset and other influential Israelis. They have had success: The Jewish presence on the Temple Mount is gaining ground in Jewish-Israeli discourse, members of the Knesset and rabbis are ascending to the Temple Mount more frequently and today a third of the Israeli public believes that when the day comes the temple should be erected. This number is only growing.

“This notion isn’t foreign to most Israelis,” says Segal. “They’re traditional and attached to the texts of the prayers and study of Judaism, which is full of the desire to re-establish the temple. The gap between consciousness and realization isn’t great.”

According to a study undertaken by journalist and social activist Yizhar Beer a year ago for the Ir Amim organization, about 12 official groups are working in Israel today to establish the temple. Some of them receive funding amounting to hundreds of thousands of shekels from the State of Israel. One of the main groups is the Temple Institute.

Thousands of people visit the Temple Institute every year, and it holds various training sessions meant to educate and raise consciousness. But they also work on the pragmatic level: The institute has the holy menorah, a modular altar that could quickly be taken apart and reassembled at the temple, the bronze basin, the shewbread (consecrated unleavened bread) table and no less than 40 sets of kosher priestly garments, which will be the prototype for the thousands of sets to be sewn in the future. The rabbis detailed 93 different tools that were used in the temple, and the Temple Institute also deals with them. “It’s based on very in-depth research done at various places,” explains Segal, “For instance, the garments of the high priest — identifying the stones in the breastplate, the whole issue of blue, purple and scarlet (particular colors mentioned in Exodus 28:6) and their recreation. It’s an entire research project of the past 20 years.”

There’s also an architectural plan. “I compare it to a late model car and a car from a hundred years ago,” explains Friedman, “there’s parts you can’t do without and there’s parts that change. A hundred years ago they also had an engine and wheels, but a lot of things change around it. The third temple will mostly look like the Second Temple, and there’s an organized plan for the Chamber of Hewn Stone, the seat of the Sanhedrin [the ancient high court assembly]. We know clearly that there will be a menorah, an altar, a shewbread table, the Holy of Holies. But we know that there will be no entryway in the sanctuary, what’s called a hall. It did exist in the First and Second Temples. The basin changed a lot over the generations and the Talmud notes that 12 spigots were added to it. It’s unknown how many they had before that.”

Friedman further explains that the modern era will also have a place in the planned temple. “Every judge will have a computer with a database and law decisions available. Fruit and grain sacrifices, which were kneaded by hand in the past to make a mixture for the sacrifice, could now be mixed in a mixer. I wrote a suggestion to build an electric oven to roast the Passover sacrifice, for the sake of the modern generation who don’t necessarily know how to roast a whole lamb,” he says. But he notes that modern advances could also create some difficulties: “The temple subsisted on the half-shekel tax. This money became sanctified when it was transferred to the temple. Today, when payments are made by direct deposit, they will only be numbers in bank accounts and there’s no actual sacred currency. It’s a nuance that needs to be considered.”

Secular Jews wouldn’t be opposed to paying these taxes when the day will come, he’s sure of it. “Just as the ultra-Orthodox pay taxes that go to the army,” he says. One thing is certain: The third temple will have cameras that will transmit what’s happening there to the whole world. The simulated sacrifice this Thursday can also be viewed online on the Temple Institute website.

Everything is ready, then, except two additional, small matters. The easy one, you’d be surprised, is the Ark of the Covenant. “The Second Temple didn’t have an ark, either,” Segel reminds me, and Friedman adds, “There are 10 studies about the location of the Ark of the Covenant. We read them and studied all of them, and reached the conclusion that the right answer is that it’s buried in the tunnels under the Temple Mount. When the day comes, we will get to it.”

The more problematic issue is the Al-Aqsa Mosque, the Dome of the Rock, which slightly impedes the architectural plans. “The temple will not be built through private acts and blowing up mosques,” emphasizes Segal. “That’s not the direction. The direction is changing consciousness. The preparations are mental more than anything.” One of the people involved in preparations, who requested anonymity, explains, “If not for the problem of the Dome of the Rock, they would build the temple today, and the temple would be built there. The third temple will be built by the government of Israel, not by private individuals. No one will do what shouldn’t be done, like an underground action to blow up the Dome of the Rock. The people who are committed to establishing the temple are normative and rational people, and just like we established the State of Israel, the day will come when we will build the temple, in an orderly, state-sanctioned manner.”

Segel notes that it can all start small: “The location of the altar where sacrifices are allowed on the Temple Mount is not within the bounds of Al-Aqsa,” he says, “so at least they should let us sacrifice on the Temple Mount.” But before any sacrifices take place there, much may have to change: Currently, the State of Israel doesn’t often authorize Jews to ascend to the Temple Mount, much less pray there.

[Editor's note: An earlier version of this article mistakenly identified Shalem College as the location of this event. Al-Monitor regrets the error.]