Will the building of a Third Temple destroy the Jewish state?

Talking to Al-Monitor, Israeli author Yishai Sarid argues that the people creating a Third Temple atmosphere believe they are avant-garde, above the people, but as a secular Jew, Sarid counters this and brings the debate to life in his recent book, "The Third." 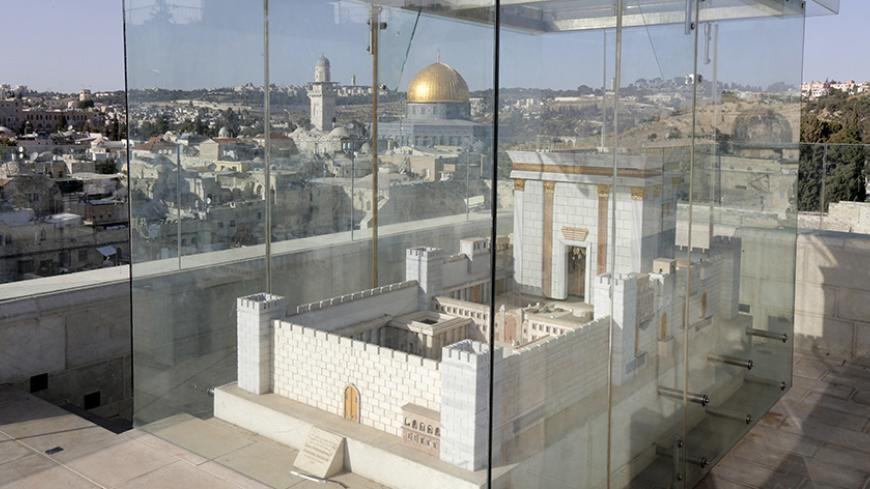 A model depicting the first Jewish temple, which once stood underneath the compound housing the Dome of the Rock (seen center, in background) and Al-Aqsa Mosque, is seen in Jerusalem's Old City, June 2, 2015. - REUTERS/Ammar Awad

The new book by Yishai Sarid, "The Third," begins and ends with catastrophes. It starts with two bombs that obliterate Tel Aviv and Haifa and a regional war in the Middle East that the Jews win, after which they re-establish the temple. It ends with complete destruction: Twenty-five years after that, on Yom Kippur (Day of Atonement), the “Amalek” enemy, a code name in the book for the Arab world, has already conquered most of Israel and nearly reaches Jerusalem. “The Temple Mount court was a bloodbath and the shelling continued mercilessly … bodies piled up everywhere … rockets fell in the court … and then a terrible sound was heard, louder than all the noises that preceded it … soldiers jumped from the walls and turned into fiery torches,” Sarid wrote.

The military disaster arrives alongside a moral disaster. At that very moment, the High Priest and the Jewish people are one step away from sacrificing a human being at the temple.

Among other factors, behind the current wave of terrorism lies the Arabs' fear of a change in the status quo on the Temple Mount, and this feeling is not totally disconnected from reality. In the Peace Index survey conducted by the Israel Democracy Institute on Oct. 28-29, 38% of Jewish people surveyed expressed support for allowing Jews to pray on the Temple Mount, which is currently forbidden. Another survey, conducted in 2013 by the Etgar Mochot Institute for the Joint Committee of Temple Mount Organizations, found that one-third of the Jewish public — of whom 31% were secular — supported the creation of a Third Temple on the Temple Mount.

Sarid, 50, is from Tel Aviv, a former intelligence officer, a lawyer and the son of Yossi Sarid (former chairman of the Meretz Party, a former Knesset member and former minister of education). He started writing the book three years ago and believes that the creation of a Third Temple will signal the beginning of a process that would destroy the Jewish state.

This week he gave an interview to Al-Monitor, of which the text follows:

Al-Monitor:  Did you write the book as a warning?

Sarid:  I had many motivations and emotional layers in writing it. Part of it, certainly, was intended as a warning. Far be it for me to compare the book, but I see it like "1984" by George Orwell. England didn’t become totalitarian, but Orwell wanted to signal what could happen at a time when the threat was real and possible.

Another part of it is that I want people to get mad, to talk with me, to argue. I want to take away the monopoly on this issue from religious Zionism. The people who work to create a Third Temple think that they are avant-garde, above the people, and it’s not true. I’m not less Jewish than they are, and the totally secular also have a role in this decision.

So, sorry, have you talked with me about it? Have you asked my opinion? My wish to strike up an argument required wide use of [Jewish scholarly] sources. It was important to me that the book would be grounded in Jewish law, and it seems I’ve succeeded. If I would have done something superficial and not grounded, I could be dismissed as an ignorant secular Jew, but I did delve deep, and so they see the book as a basis for a discussion.

Al-Monitor:  What do you think would happen after the creation of a Third Temple?

Sarid:  Beyond the obvious war with the Arab world, the denial of which is of course willful naivete, the catastrophe would be internal to Israel. On the religious level, the temple and the temple cult would become the center of the nation. The clear example is Yom Kippur. Instead of the familiar Jewish experience, created in the last 2,000 years, and more so after the creation of the state [1948], of a community- and neighborhood-based Yom Kippur, where there are no cars [Jews in Israel generally don't drive on Yom Kippur] and there’s a sense of peacefulness, quiet and reflection, also for those who don’t fast and for those who want to hear Kol Nidre [the evening service for Yom Kippur] and the shofar in a synagogue — instead of all this, it would be sacrifices from morning to night. Rams and sheep and a high priest splashing blood all over, things suited to the Bronze Age. It would mean returning Judaism to its infancy, erasing its intellectual advancement, which has risen above all these things. Unrelated to the Muslims, it would cancel all of the achievements of Judaism, which has advanced from coarse materiality to abstract spirituality, based on texts, on interpretations. All of the Jewish genius — both religious and secular — would be lost. It will be destruction.

Al-Monitor:  And on the political level?

Sarid:  When polls show data for public support for the creation of a Third Temple, we have to see how they represented it in the survey. A temple is wonderful and nice, but did they explain that it would also involve the rule of priests. Political power would be in the hands of priests and kings. The legislative authority would be God, the executive authority would be the king and the judicial authority would be the Sanhedrin [high court and council at the time of the Jerusalem Second Temple]. To put it simply, it’s Iran with adjustments for Judaism. For a state like Israel, based on the talents of its human capital, liberalism and democracy, which uses the potential of its citizens to the utmost, this would be a death blow. It would be a primitive and oppressive state.

Al-Monitor:  Religious readers objected to the claim in your book that such conduct would lead to human sacrifice.

Sarid:  In the book, God tells the king, Yehoaz, to sacrifice a human being, and Yehoaz, who is in dire straits, says, "Maybe God is testing me, and he'll send me a ram, like in the Sacrifice of Isaac" [described in Genesis 22]. But Yehonatan, the son of Yehoaz, who is the narrator in the book, prevents his father from doing so. A megalomaniac person claiming that God has revealed himself to him, the way Yehoaz claims, will act like Abraham. If no one intervenes to prevent him from acting, he will go on with the deed. From the perspective of Jewish law it’s even correct. Who are you to doubt God when he talks to you? But the creation of the Third Temple involves such insolence that it veers from Judaism as we know it. It’s a prelude for the breaching of other boundaries. It doesn’t stem from the religion itself but from a crazy interpretation of it. Whoever goes so far and claims such authority is capable of anything.

Al-Monitor:  In our time, isn't it a little unfounded to really fear the creation of a Third Temple?

Sarid:  There’s a lack of a national ethos. There was the ethos of the Labor Party that I admire, which strove to create the state, a worldview that involved awareness that another people lives here. The Labor Party’s historic role has ended, and the element that has assumed the mantle is religious Zionism and Gush Emunim [settlement movement], which has a religious messianic agenda. That is, it’s not enough for them to create a national home, they also seek to re-establish the Kingdom of David. The minister of education [Naftali Bennett] has inserted content on the temple into the curriculum — what is that but laying the groundwork? So it won’t happen now, but in 20 years. We see the processes happening. It’s the ideological fuel that drives the state today.