Israeli security forces fear that the recent shooting attack in Jerusalem signals the beginning of a new wave of violence, especially during this month of Jewish holy days. 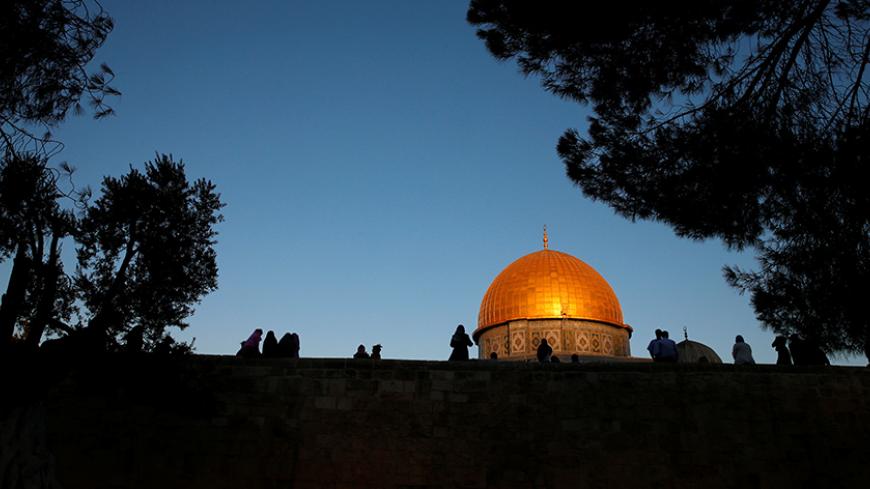 People are silhouetted as they walk in front of the Dome of the Rock on the compound, known to Jews as Temple Mount and to Muslims as Haram al-Sharif, in Jerusalem's Old City, Sept. 12, 2016. - 2016. REUTERS/Ammar Awad

The Israeli security service went to great efforts to contain, restrain and eradicate the terror wave that began just over a year ago in October 2015, and has since received the appellation "individual intifada." These security service efforts included the development of special algorithms that monitor social networks to track down potential assailants according to the status updates they write, before they embark on their evil schemes. Other efforts include massive reinforcement of security service personnel in areas surrounding East Jerusalem, stiffening punishments for lawbreakers and intensifying pressure on West Bank Palestinian populations who engage in terror activities, versus the easing of restrictions on terror-free areas.

The terror wave had died down in recent months and Israelis started to breathe more easily. Nevertheless, anyone who knows anything about security and terror had realized that the Jewish holiday season in October — from Rosh Hashana (Jewish New Year), to Yom Kippur (day of fasting) and Sukkot (Feast of Tabernacles) — would be the true terror litmus test. This Jewish month of Tishrei is always the most worrisome period of the year because of the tension enveloping Jerusalem, which is nowadays flooded with Jewish pilgrims. Hence, there are numerous frictions and flash points at this time between the religions and the various adversaries in the city.

Unfortunately, the Tishrei holidays have lived up to their reputation so far this year. On Oct. 9, two days before the holiest festival for Jews (Yom Kippur), Mesbah Abu Sabih from Silwan embarked on a killing spree on the streets of Jerusalem. He was armed with a submachine gun (evidently an M16 belonging to the Israeli army) and shot passersby from a moving vehicle on a route several hundred meters long in East Jerusalem: from the French Hill neighborhood via the Light Rail stop opposite the police national headquarters, all the way to the Palestinian neighborhood of Sheikh Jarrah. Police forces pursued him during most of the route, but Abu Sabih succeeded in killing policeman Yosef Kirma and former Knesset employee Levana Malichi who was standing at the Light Rail stop. Other Israelis were wounded in the shooting spree, before Abu Sabih was shot and killed by the police.

Beyond the tragic loss of human life, this terror attack served as a harbinger of things to come, despite the previous signs of waning terror and despite the Israeli efforts to stifle the year-old terror wave. This time, it did not involve a hate-filled youth grabbing a knife to run out and stab policemen, or an inflamed adolescent girl attacking passersby with scissors. Abu Sabih is one of the most notorious Palestinians in the city’s eastern section; his local nickname is “the Lion from al-Aqsa.” He was one of the key activists of the Mourabitoun on the Temple Mount, and after this organization was outlawed he joined a group called Shabab al-Aqsa.

The Abu Sabih attack disproved the Israeli assumption that the harsh security steps adopted on the Temple Mount, together with the quiet contacts and "understandings" between the prime minister’s office and the court of Jordanian King Abdullah, had created just the right formula to bring peace and quiet to what is viewed by Israeli experts as the most explosive site in the world.

Abu Sabih was a symbol of Palestinian extremism on the Temple Mount, which believes that Israel is trying to push the Muslims away from the Temple Mount and increase a Jewish presence on the spot. Sabih was a convicted terrorist sentenced several times to various punishments for violence. He was a provocateur, well known by the Israel police force, and was supposed to have begun serving a prison sentence for attacking a policeman on the day he embarked on his killing spree. In posts he placed on his Facebook page before the attack, Abu Sabih wrote about his yearning for the Al-Aqsa Mosque and that “the dark ones” (the Israelis, according to his definition) “are preventing me from going there.”

The killing of Abu Sabih following the terror attack reignited the wave of violence, at least for a few days. The scenes that were observed in the Palestinian neighborhood of al-Ram in Jerusalem, where Abu Sabih’s family lives, turned the clock back and aroused great worry in Israel. The neighborhood, parts of which are located on municipal territory of the Israeli capital, turned into a roiling, hatred-filled Hamas stronghold for a few days. Israeli media crews were not allowed to get near the family’s house and were told by local residents that Jews were not welcome there.

Abu Sabih was a Hamas member, and the organization praised his deeds to the skies and called on people to take action like he did. Neighborhood activists and his family members distributed candy to the hundreds of Palestinians who crowded the streets and shouted defamatory statements about Israel and the Jews. In the riots that erupted at the same time, another Palestinian was killed and demonstrators were wounded, as well as an Israeli policeman. It seems that the wave of violence that erupted last year and had started to die down in recent months has returned to us in full force. Israeli security sources had warned of complacency just prior to the Jewish holidays; they noted that the situation was explosive and volatile and that there were many who would want to reignite the region. It turns out that they were totally on the mark: That is exactly what happened.

Quiet started to return to Jerusalem after a few days, but it is an especially tense quiet concealing great dangers just under the surface. Yom Kippur is behind us, but the Sukkot festival (a week’s holiday starting Oct. 17), which seals the Tishrei holidays and brings numerous Jewish pilgrims to Jerusalem, also has the potential for an outbreak of violence.

Israeli Minister of Public Security Gilad Erdan renewed his attacks against Facebook. He said that the social networks had again served as a cooperative fertile breeding ground for incitement in the case of Abu Sabih. After the terror attack, Facebook closed Abu Sabih’s personal page. Israeli security agents claim that this was too little, too late. However, in conversations with Al-Monitor these sources admitted that while the social networks do help disseminate incitement, they are not the basic cause of its existence.

“The conflict existed before Facebook,” said a senior Israeli security figure in the Jerusalem area, speaking to Al-Monitor on condition of anonymity. “We have to continue the work with the social networks and continue putting pressure on Facebook and similar networks. But let’s not forget the fact that the basic situation on the ground — tension between the populations, tension on the Temple Mount and the various conspiracy theories­ ­— is what brought us to this point. The situation requires in-depth, root canal work, not cosmetic steps alone.”