For hundreds of Israelis, the task of renewing the Temple at "its original place," has become a life mission. 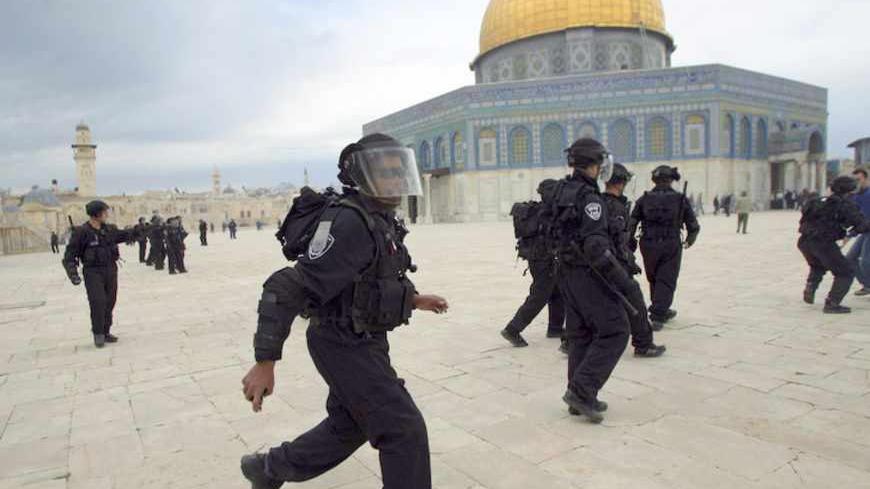 Israeli border police run in front of Dome of the Rock during a protest after Friday prayers at a compound known to Muslims as al-Haram al-Sharif and to Jews as Temple Mount, in Jerusalem's Old City, Feb. 22, 2013. - REUTERS/Muammar Awad

I went to visit the Jewish Quarter in the Old City of Jerusalem to see how the preparations for the establishment of the new temple were getting on. For hundreds of Israelis, the task of renewing the temple has become the job of their lives. It is about time, so they believe, to establish the Third Temple in its proper place — right on the site where the First Temple and the Second Temple were once standing before being destroyed.

Yehuda Glick is one of the “elite soldiers of the temple” who dedicate their lives to the mission. Since moving to Israel, he has been preparing for the great day, waiting to see the construction of the edifice that is to become the holiest place on earth for the Jewish people. A black skullcap adorning his head, his Hebrew flavored by an Anglo-Saxon accent, Glick spends his time as a tourist guide, escorting visitors to the Temple Mount.

I met Yehuda at the entrance gate to the Temple Mount. There is no greater thrill in his life than to walk on the soil of the Temple Mount. While he has visited the place hundreds or even thousands of times,,  his heart still beats with excitement on each visit. “As far as I see it, an amazing divine move is manifested here,” he explained while we were waiting in line at the gate. “The state of Israel is a part of this divine move, which will culminate in the establishment of the Third Temple.”

How is it going to be built and who will build it? I asked him. A broad smile spread across his face. He may have felt sorry for me or, perhaps, considered the question to be out of place. “The notion that the Temple will be built by itself, under divine directions, is the sort of idea typical of Diaspora Jews,” my interlocutor noted. He had left New York for Israel at the age of 8, settling with his family in Otniel, south of Hebron. “When I started visiting the Temple Mount 15 years ago, you could hardly gather a minyan — the quorum — for prayer. These days, hundreds of thousands of Jews are coming to pray on the Temple Mount. They expect us to rebuild the temple, and God willing, it will be built.”

Hundreds of tourists, most of them Christians, were standing in line under the scorching sun, waiting for the security check that every visitor seeking entry to the Temple Mount is required to pass. Jews are not allowed to bring in scrolls of the Torah, prayer books, copies of the Book of Psalms or any other article of worship that could be used to establish a mystical association between the Temple Mount and the holy Jewish Scriptures. Under the current arrangements agreed on between Israel and the Kingdom of Jordan, Jews visiting the Temple Mount are banned from openly praying on the premises or swaying in worship. One single event of deviation from the set rules could be enough to spark an international incident.

In fact, precisely such an incident occurred while I was waiting at the entrance gate to the Temple Mount. All of a sudden, shouts were heard from inside the enclosure. The policemen standing on guard at the gate went on alert and hurried to lock it. It turned out that a Muslim worshipper accused an Israeli policeman of knocking down a Quran she was holding in her hands. She started yelling "Allahu Akbar!" and within minutes, dozens of worshippers at the scene rushed to her aid, and some of them even tried to attack the policeman. The Temple Mount was closed to visitors right away and the incident was promptly brought to the attention of the top echelons in Israel, the Palestinian leaders in the territories and the Jordanian king's palace.

The commanding officer in charge of the Temple Mount site told me that incidents of that kind were an everyday matter. “The policeman on duty reported that the worshipper had thrown down the book on purpose, to stir up a provocation and, needless to say, I believe him,” he said, adding: “Even a minor event is liable to trigger an international incident.”

As the gates to the Temple Mount were closed, Yehuda and I headed for the Jewish Quarter, where the Temple Institute is located. Hundreds of tourists visit the Temple Institute store daily to see at close hand the preparations for the establishment of the temple. “Fifty percent of the visitors are not Jewish,” recounted Reuven Cohen, the store manager, who immigrated to Israel from England 34 years ago. “The Jews are coming here to look for the roots of the temple, whereas the visiting evangelists are deeply involved in the establishment of the temple. They are well aware that their process of redemption is closely interwoven with ours. They actually believe that the path of return of Jesus Christ to this earth passes through our temple.”

The articles of worship intended for use in the new temple, once it is erected, are on display in the store. Kits that include guidelines for proper conduct in the holy site are offered for sale alongside a variety of jigsaw puzzles of the temple — some comprising 24 pieces, for 3-year-old children, and others of 100 pieces and even 1,000 pieces — for the older. Hundreds of books, neatly arranged on the shelves, tell the history of the temples — those that were destroyed and the one that is to be built. There are books on the sacred golden candelabrums, books on the houses that served the Jewish priests who performed their duties at the temple, and others on the ritual sacrifices and prayers, as well as on the way of life that will prevail in Israel after the temple is established.

“Last year we had 50,000 visitors,” David Schwartz, who heads the Temple Institute, proudly stated. “The ever-growing interest shown by tourists reflects the feeling that the days of the Messiah are around the corner. You can sense it in the air — in schools, in synagogues, even in the homes of the secular. Everyone feels it coming up.”

While we were talking, hundreds of visiting school students were wandering around the Institute, impressed by the sights. “Yes, that’s true,” Schwartz added. “As you can see, people are looking for meaning to life. They want to achieve something. We are currently at the stage of preparing people for the construction of the temple.”

On display, next to the architectural building plans, are models showing pilgrims getting down from the light rail at the temple gate station. Others are seen parking their cars in an underground garage to be built beneath the temple. Sophisticated elevators would transport the worshippers right into the temple.

Schwartz, Cohen and Glick are all confident that once the Third Temple is erected, the world will become a fundamentally different place. The Lord would then bestow on Earth great abundance and there would no longer be anyone in need of charity.

“Those who do not feel what is going to happen are either blind or stupid, or ungrateful,” Glick noted, clearly annoyed with me, having noticed the skeptical expression on my face. “There has never been anything like that in the history of the human race; the return of an exiled people to its homeland is unique in human annals. It is all written in the Torah. And the last, supreme stage will be the construction of the temple.”

However, there is one far from marginal factor left out. In all those plans and photographs and illustrations and puzzles and books put forward by the Jewish believers, the Third Temple is seen at the center of the Temple Mount, rising high up above it.

But there is no trace there of the Dome of the Rock, as if the earth had swallowed it up.