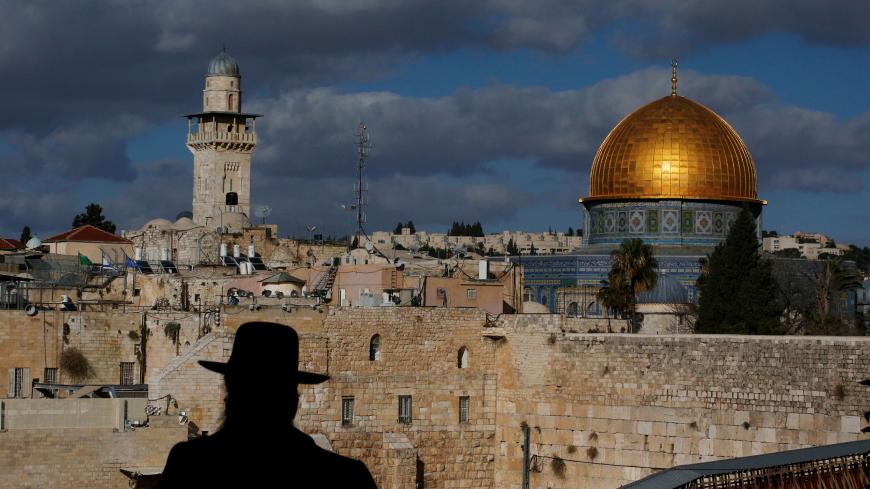 An ultra-Orthodox Jewish man is silhouetted as the Dome of the Rock (R), located in Jerusalem's Old City on the compound known to Muslims as the Noble Sanctuary and to Jews as the Temple Mount, is seen in the background, Dec. 7, 2017. - REUTERS/Ronen Zvulun

The ban imposed by Prime Minister Benjamin Netanyahu on visits by government ministers and Knesset members to Jerusalem’s Temple Mount lasted three straight years, barring some experimental interruptions in 2017. Netanyahu’s decision at the time was prompted by riots at the site and the so-called individual Palestinian intifada, which broke out in the fall of 2015. The murder of Alexander Levlovich in September 2015 and the murders of Eitam and Naama Henkin in the West Bank in October 2015 signaled the beginning of the intifada.

The tension in Jerusalem was intense, and the Palestinians accused Israel of seeking to change the status quo at the Temple Mount complex. Netanyahu feared that the Palestinians would view visits by right-wing ministers and Knesset members as provocations, engendering further violence. And so, he rightly issued the ban. Since then, the political right has applied relentless pressure on Netanyahu to lift it.

On July 3, Netanyahu addressed a letter to Knesset Speaker Yuli Edelstein, saying that lawmakers could visit the Temple Mount once every three months. The first of the ministers to implement his “right” to visit the site after Netanyahu’s decision to lift the ban was Uri Ariel, the minister of agriculture and a member of HaBayit HaYehudi. Ariel has made no secret of his yearnings for a third Jewish temple to replace the two destroyed ones. “We hope and pray for Tisha B’av to be a day of happiness and for the temple to be rebuilt, so that there will be no more fasts and we will be able to bring all the sacrifices that we read about in this week’s Torah reading,” Ariel said. “God willing, a kohen’s [Jewish cleric] blessing will be bestowed on all those ascending the Mount.”

Ariel was citing the prophet Zecharia and referring to the ninth day of the Jewish month of Av, a day of fasting and mourning on which tradition has it the temples were destroyed. Tisha B’Av falls this year on July 22, and Ariel was essentially exhorting believers and temple loyalists to follow his example and thus turn the day of mourning into an occasion for “happiness.” Knesset member Sharren Haskel of the ruling Likud Party visited the site shortly after Ariel, and additional lawmakers who advocate the temple’s reconstruction, such as Shuli Mualem of HaBayit HaYehudi and Yehuda Glick and Amir Ohana of the Likud, followed suit.

The timing of the renewed visits is probably not a coincidence. It comes just three weeks after Netanyahu’s June 18 meeting in Amman with King Abdullah of Jordan, the site’s Muslim custodian, after which his office issued a statement saying the prime minister “reiterated Israel's commitment to maintaining the status quo at the holy sites in Jerusalem.” Did Netanyahu discuss with the monarch his desire to lift the ban and thereby ease the political right’s pressure on him? Possibly. The fact is that following the meeting, the Knesset’s chief security officer issued a letter on July 5 advising all Knesset members interested in going to the Temple Mount to coordinate with police.

According to a recent report by the Yeraeh movement dedicated to promoting a Jewish presence on the Mount, the number of Jews visiting the site has increased significantly, reaching 22,000 in 2017. The group describes itself as an initiative by volunteers who greet Jewish visitors to the site and report on events there; its report forecasts a further significant rise in the number of visitors in the next few years because of its activities.

The demand by government ministers and lawmakers to experience for themselves the site of the temple, Judaism’s holiest site, appears legitimate. Haskel, for example, explained after her visit that it was wrong to depict the experience as being only religious in nature. “The Temple Mount is at the very heart of millennia of Jewish culture and history. … One cannot separate the special place from our Israeli-Jewish identity, it is part of us,” she said.

However, right-wing Knesset members, Temple Mount loyalists, the Yeraeh movement and recently formed youth advocacy groups have an ulterior motive. They not only want to experience the place where the ancient temples stood, they want to reconstruct the temple “speedily, in our times.”

Aviv Tatarsky, a researcher with the anti-occupation Ir Amim nongovernmental organization, told Al-Monitor, “It won’t be the Messiah who will resurrect the temple, but rather them, the organizations and right-wing movements [that] dream of rebuilding it with their very own hands.” Tatarsky added, “After all, in order to rebuild the Temple Mount, the Dome of the Rock must be destroyed.”

Still, we should remember that according to some of the Jewish Sages (such as Rashi and in the Zohar), the third temple will descend from Heaven all complete and constructed, involving no humankind preparation, destruction or construction.

Be that as it may, Tatarsky said the idea that the temple must be rebuilt is slowly gaining traction, and its advocates believe a growing stream of visitors is the only way to spread the word so that the reconstruction becomes a widespread, popular demand and the right of the Jews to rebuild their destroyed temple can no longer be denied.

Those ultimately spreading the word are the ministers and Knesset members of the right, such as Uri Ariel. They were the ones who kept up the pressure on Netanyahu throughout the years, and as we know, Netanyahu eventually gave in.

And not only the prime minister.

Tatarky said the massive right-wing pressure has changed the conduct of the police, as well. A report he authored last November claimed right-wing activists were disseminating footage showing “public displays of affection” by police toward the temple activists in order to “spur more activists to visit the Mount.” The video clips send a clear message that the police are on the activists’ side, the NGO argued.

In addition, the state itself is funding activities related to site visits. Among the 22,000 visitors of which the Yeraeh movement boasts were high school yeshiva students and students at pre-military academies funded by the Ministry of Education and other government departments. Their ascent encourages those in the movement for the building of the third temple.

The Temple Mount loyalists make no bones of their goal — to lay the cornerstone for the third temple. In the past, these activists were detained and some were banned from the site and even arrested. This week, Netanyahu, perhaps unwittingly, paved their first road into the hearts of a growing number of adherents.

The visitation to the Mount by the right-wing leadership, which openly claims the erection of the third temple is on the agenda, helps instill in the public mind an idea once considered absurd, nightmarish and dangerous. And if high-ranking ministers of the right ascend the Mount, their supporters will surely follow.