For archaeologists excavating near Temple Mount, every find helps to clear the mystery surrounding what happened at the time of Jerusalem’s destruction. 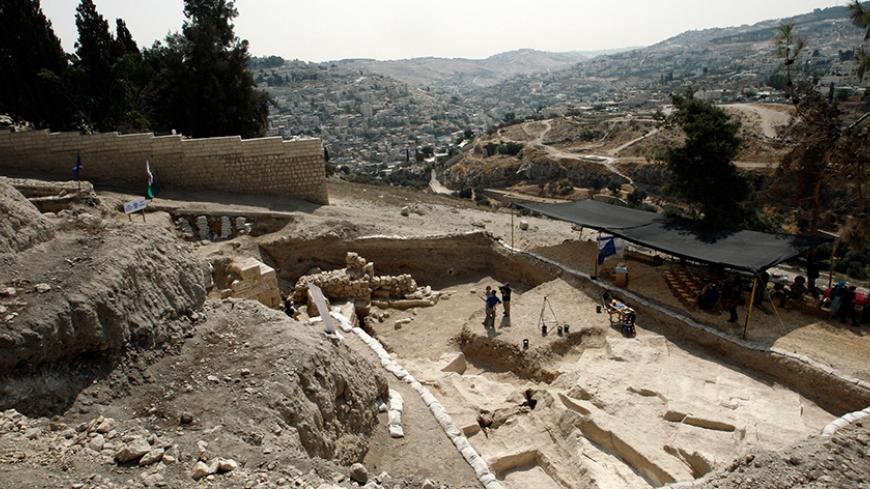 After 20 years of excavating in the City of David, archaeologist Eli Shukrun quickly realized one day what an important find he had made. It was 2011, and he was digging at an Israel Antiquities Authority site — to be exact, a drainage tunnel of several hundred meters, running from the Siloam Pool, a rock-cut pool on the slopes of the ancient city of King David, to the foot of Robinson’s Arch, a stone staircase in the Old City's market area. It was a rare find, well preserved amid all the mud.

Shukrun had unearthed a Roman “gladius,” or sword, waiting 2,000 years to be found. It apparently belonged to a Roman soldier who dropped it when he climbed into the tunnel to search for Jewish rebels who had fled there in a panic after realizing their revolt had failed. Jerusalem had just been taken, and the Second Temple destroyed.

At the time, Shukrun recalled what is practically the only contemporary source describing the battle for Jerusalem, “​The War of the Jews against the Romans,” by Josephus Flavius. The text reads, “After the Romans killed some of the people that rose against them and took the remainder captive, they sought out the people hiding in the tunnels, and ripped up the ground over them. Everyone they captured was put to the sword.” It continues, “There were some men there, who were driven by avarice to descend into the tunnels and force their way through the piles of corpses. Many precious objects had been hidden there, and no way of obtaining them was considered excessive to the greedy.”

Avi Solomon, archaeologist for the Western Wall tunnels on the Temple Mount, told Al-Monitor that the sword “is archaeological evidence of descriptions of the final days of the battle over Jerusalem, right after it was put to the torch and the Upper City fell. Jewish fighters entered the fetid drainage tunnels, filled with the feces and sewage of Jerusalem, in an attempt to flee for their lives. Some of them took valuables, including gold coins and jewelry. Roman legionnaires chased after them. They lifted the stone manhole covers, slaughtered the fighters, and seized their valuables.”

According to Shukrun, “Nothing can be compared to finding that sword and finding other pottery shards in that drainage canal. You are experiencing history, touching history. The last of the rebels descend into the sewers, which reaches to the Kidron Valley [on the eastern side of Jerusalem's Old City] and the Pool of Siloam, so they could escape into the Judean Desert. What were they feeling? They had no food. They had no water. It was pitch dark. While our finds show that they had clay lamps, their use must have been minimal because of a shortage of oil. It was the month of Av [in the summer]. It was very hot. The situation was very harsh. And what do they hear right above them? The sounds of destruction and the footsteps of Roman soldiers marching along the street right above them. What do they smell? The smoke coming from the burning of the temple. It is a terrifying situation. The more you dig, the more you find, the better you understand what you just touched.”

The sword was just one of the finds discovered in the past few years during excavations at the foot of the Temple Mount ongoing since 2006. They are part of the Antiquities Authority’s efforts in the area. When Israel marked the Fast of the Ninth of Av on July 26, commemorating the destruction of the First and Second Temples, thousands upon thousands of the Jewish faithful made their way to the Western Wall and the sacred sites on the Temple Mount, which was destroyed a second time in A.D. 70. They visited sites that confirm a Jewish presence in Jerusalem at the time, as the city stood on the cusp of inevitable destruction.

The artifacts that have been found tell more than just the story of the destruction of Jerusalem. They also tell about life in the city before it was destroyed. One discovery was a vast network of public ritual baths for pilgrims.

Solomon stated, “It was found just 20 meters from the Western Wall. These very baths were used by people making pilgrimage to the Temple. It is an ethno-archaeological find that gives evidence as to the kind of people living in the area at that time. Ritual baths, or mikvehs, were used exclusively by Jews. No other people used them. This testified to a Jewish presence in the area at the time, despite what some people around the world might say.

“We found the remains of a huge bridge that connected the Upper City with the Temple Mount, and the remains of foundations, which can be dated back to the time of King Herod and even to the Hasmonean period.” Solomon continued, “At some of the sites, we uncovered layers of destruction, which included charred remains of pottery, lamps and stone utensils typical of the late Second Temple period. North of the bridge, we found the arches of a Second Temple-era building that had collapsed. Above it are remains of the Roman legion that was garrisoned in Jerusalem. When we excavated 2 to 2.5 meters below that, however, we discovered the archaeological stratum representing life during the Second Temple period. We found stone utensils there, but this time, they weren’t completely shattered. Their uses could be reconstructed. We found the stone leg of a table and a kind of a Kalal type stone jar.

“The significance of the find is enormous,” he said. “A specific population of Jews lived there — either priests or sages, who kept the laws of ritual purity. How do we know this? In Jewish law, some utensils can become impure and other utensils cannot. A clay vessel that has become impure cannot be purified, so it must be shattered. A metal tool can be washed in a ritual bath to purify it, while stone vessels can never become impure. Stone utensils were significantly more expensive than vessels made out of pottery or metal. Anyone who invested in them must have had a good reason for doing so. The conclusion is that they were used by priests and scholars, whose lives revolved mainly around the Temple service.”

Both Shukrun and Solomon observed that every such discovery helps remove the mystery surrounding what exactly happened in Jerusalem at certain periods of time. They help clarify events over which archaeologists are still arguing today. Only this year, it was argued, during an archaeological conference at Bar Ilan University, that the walls of the Temple Mount actually fell 300 years later than commonly believed. Shukrun disputes the claim, insisting that the evidence proves otherwise. “In the drainage canal, we found a stone from Robinson’s Arch that fell, broke through the pavement and penetrated the canal. All signs indicate that the city was completely destroyed, just like Josephus describes.”

Solomon considers it a “great privilege” to be able to resolve the many contradictions. “Because of our finds, we can connect a people returning to its land with what existed here 2,000 years ago. I can tell a kid in high school today, ‘This is the pavement that your forefathers walked on.’ Not many nationalities can do that. The Jewish people’s return to its homeland is also unique. In most cases, when a nation goes into exile, it disappears. Only the Jewish people have been gathered here from the four corners of the Earth. It has come back to its land, and now it is able to excavate the relics of its past and connect with them.”