Netanyahu wants an emergency government of Jews only

Although the coronavirus doesn’t distinguish between Jews and Arabs, Prime Minister Benjamin Netanyahu has been doing so while calling on Blue and White leaders to join him in an "emergency government." 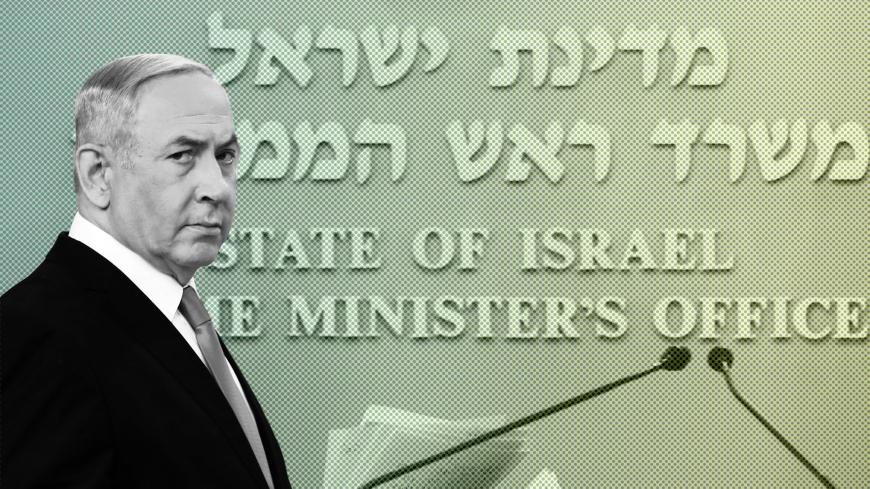 Israeli Prime Minister Benjamin Netanyahu arrives at his office to deliver a speech on measures that will be taken to fight the coronavirus, Jerusalem, March 14, 2020. - Gali Tibbon/Pool via REUTERS

Citing the current coronavirus outbreak, Israeli Prime Minister Benjamin Netanyahu remarked on March 12, “An emergency government was established 53 years ago in Israel. I call for the establishment of a similar government now. This evening.” He then called on Blue and White Chairman Benny Gantz to join him in the endeavor. Gantz tweeted in response, “Given the situation, we are prepared to discuss the creation of a broad national emergency government, which would include representatives of all parties in the House.” In other words, the government he envisioned should include the Arab Joint List. Netanyahu later clarified his position, asserting, “Supporters of terrorism cannot be part of the government, whether under routine circumstances or in times of emergency.”

In short, Netanyahu is adopting the same tack he took after the September elections. As I explained March 10 in Al-Monitor, he continues to paint the Joint List, which won 15 Knesset seats in this month's election, as ineligible to participate in the political arena. Netanyahu makes a point of calling Arab Knesset members “supporters of terrorism,” to try to prevent them from gaining legitimacy and become an integral part of Israeli politics, which is best characterized as Jewish.

In fact, the entire right-wing/ultra-Orthodox bloc that Netanyahu leads acts as if all the Arab parties' Knesset members are not part of Israeli politics at all. In other words, the Knesset consists of 105 members, not 120. Netanyahu realizes that once the Arab parties become regular partners in the formation of coalitions and governments, the right could lose its chance to head the government. At the same time, the impression emerging across the political spectrum suggests that the center-left has no chance of forming a government without the help of the Arabs.

So, although Netanyahu may use his frequent press conferences these days to say that the coronavirus does not distinguish between Jews and Arabs, he definitely distinguishes between Jewish Knesset members and citizens and their Arab counterparts and seeks to form an emergency government for Jews only. Gantz provided a clear picture of this March 14 when he wrote on Facebook that Netanyahu had proposed that he join an emergency government that “would not distinguish between right and left, religious and secular, Jews and Arabs.… I suggested that our negotiating teams meet to discuss the necessity and possibility of forming a broad government for the next little while.… I have yet to receive a serious response to my offer.”

The deadlock prompted President Reuven Rivlin to assume the role of the responsible adult, inviting both men for a joint meeting on March 15. Subsequently, Gantz and Netanyahu agreed on their respective negotiating teams meeting again after the president tasked Gantz with forming the next government, an action Rivlin took on March 16. So, what is going on?

Is Netanyahu exploiting the coronavirus outbreak for political purposes? Has he found a way to continue serving as prime minister without having won 61 seats in three consecutive elections? According to Moshe Ya’alon, Blue and White's number three, the answer is absolutely yes. On March 14, Ya’alon lashed out in a tweet condemning Netanyahu, charging the “cynical use of the coronavirus crisis for the personal political needs of a criminal defendant about to stand trial.”

“Israelis feel that this is an emergency situation, and in situations like this, they always feel a need to come together and unite. Netanyahu has been working 24/7 to get public support for an emergency government,” Ronen Tzur, who served as an adviser to Gantz, told Al-Monitor. “The Blue and White party is in the midst of internal deliberations. It is not sharing its position with the public or offering an alternative. That is its main mistake. My assessment is that there is a chance that there will be a very temporary emergency government. The relationship between its leaders will determine if it forms the basis for a more permanent government in the future.”

By noon March 15, Blue and White had already resumed speaking in a unified voice, accusing Netanyahu of being disingenuous about his desire for a real partnership. It now looks as if Netanyahu wants to form a new government that he will lead while maintaining his bloc and that includes the Blue and White but without its bloc. Thus Netanyahu could actually maneuver Blue and White into a situation in which it breaks one or the other of its two main promises to its electorate: They try to form a minority government with the support of the Joint List, or they will sit in a government with Netanyahu.

Beyond the political maneuvering, there are several other issues that must be addressed: Is the Arab public prepared for the spread of the coronavirus? Are authorities helping it prepare? On March 8, Knesset member Sami Abou Shahadeh of the Joint List demanded that the Ministry of Health make information available in Arabic. The ministry responded positively and even launched a Telegram channel on the topic. Yousef Jabareen, also of the Joint List, later warned the Education Minister Rafi Peretz on March 11, “Schools in the Arab community are not prepared for the emergency situation resulting from the coronavirus crisis.”

In a conversation with Al-Monitor, Shuaa Massarweh Mansour, mayor of the Arab town of Taibeh, explained, “The government’s absence is having a direct impact on the functioning of the local authorities. In terms of the coronavirus, there is a lack of clarity about it. We took several steps as a local government without waiting for decisions by headquarters [national government]. Schools in Taibeh are prepared logistically for distance learning in the hope that the systems put in place by the Ministry of Education do not collapse.”

In contrast, Dr. Riad Majadla, head of the Department of Emergency Medicine at the Rabin Medical Center in Petah Tikva, turned his Facebook page into an Arabic-language resource for information on the coronavirus. He also delivered a lecture on the topic in Baqa al-Gharbiyye that was broadcast live.

“The authorities and the Ministry of Health offer services in both languages and are available for any questions or clarifications,” Majadla said. “They realize that the virus does not distinguish between Arabs and Jews, so if an Arab is infected, he could go on to infect other Arabs and Jews alike. This is an issue we need to deal with on our feet while listening to instructions. Unfortunately, we sometimes witness cases in Arab society in which people don’t really follow instructions and orders.”