Iranians attempt to lift each other's spirits with comedy, online cooking shows and by writing off debts, among other ways. 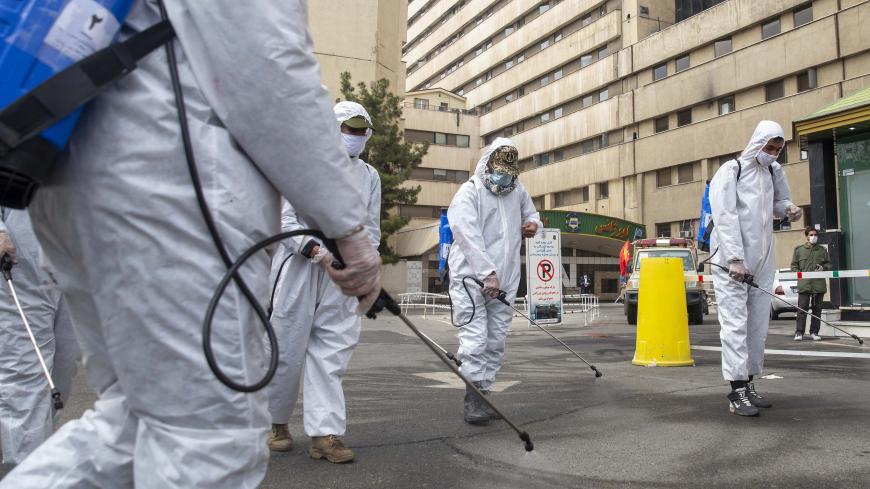 Iranians from all walks of life are supporting each other amidst the anxiety, fear and increasing deaths due to the outbreak of the novel coronavirus in the country.

One of the first morale-boosting videos came from a profession hit very hard by the coronavirus — doctors — who have been working nonstop. They posted videos of themselves dancing with each other. The videos went viral, leading to dozens of other similar clips appearing on social media.

The video, viewed more than 1.5 million times, shows the singer along with some of his acting students. The song, called “Dasteto Bede Man” (“Give Me Your Hand”), is based on a French melody by Christophe Mae, but the lyrics are written by Khatibi himself.

“In Greek mythology, the last thing left in Pandora’s Box was hope, and hope is the only thing that people have now,” Khatibi told Al-Monitor. “I guess that’s why people like this song or have this feeling that there is a positive vibe behind it," he added.

Khatibi said “the positive vibe” was partly due to the number of performers in the video clip, which includes many of the young people he has trained to perform over the last five years.

“Our motto is that people are capable of doing anything they want to, that they are capable of positive and kind acts,” Khatibi said, explaining why videos like his could inject hope to people in the gloomy times that Iranians face. “It’s like a reminder to people that we are human and can do anything as long as we do not give in to despair. These are tough times, but we’ll overcome them.”

“I’m so happy to see that people are listening to this song worldwide, and I’m receiving messages on Instagram from all over the world — [places] like Spain, Canada, Turkey, Australia and the United States,” he added.

Popular comedian Rambod Javan has begun using Instagram as a platform to broadcast an entertaining 45-minute show. Javan used to host and produce the comedy show “Khandevaneh” on Iran’s state TV until a year ago when he declared that he needed a break. Though he was scheduled to restart his show in the new season, Javan announced that he didn’t want to put the life of his 150-member group in danger and canceled his public appearances due to the coronavirus outbreak around the country. Instead, he started the online show “Khoune Baazii” (“House Games”), which he recorded in his own house and aired on Instagram. The show also “hosts” stand-up comedians and singers who join him online. He chats with his viewers on issues surrounding the coronavirus crisis, giving them advice on how to cope with and distance themselves from the disease.

Solidarity was displayed as well by the proprietors and owners of stores and malls who allowed their tenants to pay only a portion of rents due. Iran closed all stores except groceries and pharmacies March 20.

Abdullah Motamedi, a retailer in a mall in the western city of Kermanshah, told ISNA news agency March 11 that the owners of the mall have asked the store owners to pay half the rent.

“This mall has around 60 stores. Most of the tenants are young and have started their jobs by taking loans and are right now under [economic] pressure. That’s why the decision by the owners has been encouraging for [us],” said Motamedi.

In the southeastern city of Chabahar, a proprietor of 80 stores has exempted all his tenants from paying March rent. “My share in controlling the coronavirus crisis is staying home, taking care of personal hygiene and assuring that my tenants — who have been [mired] in recession for some time or had to close down the stores — that they need not worry about falling behind on their monthly rents," stated Asef Darbin in an interview with IRNA news agency March 17.

Witnessing the ordeal medical professionals are going through, artists, celebrities and ordinary people with a large number of followers are gathering money to purchase equipment and masks for them.

A video published on news outlets in Iran shows Hediyeh Tehrani, a superstar of Iranian cinema in the 2000s, packing surgical face masks, protective outfits and other needs for medical professionals to be sent to hospitals.

In Qom, the epicenter of COVID-19 in Iran, a number of workers — most of them elderly — in the city's largest morgue refused to clean the corpses of those who died of the virus. In their place, a group of young women who are studying in Qom’s seminary volunteered to wash the corpses, as is required by Islam.

"We, too, were apprehensive. But we are strong physically and spiritually,” noted Zahra Jafari, the leader of the group, in an interview with local Hawze News. “All the [women] who volunteered here had never seen a corpse before, not even the corpse of their relatives. But they did it nevertheless,” said Jafari.