Shopping malls, barber shops and some stores reopened across Turkey Monday as the government rolled backed coronavirus precautions with aims to bolster the battered economy. 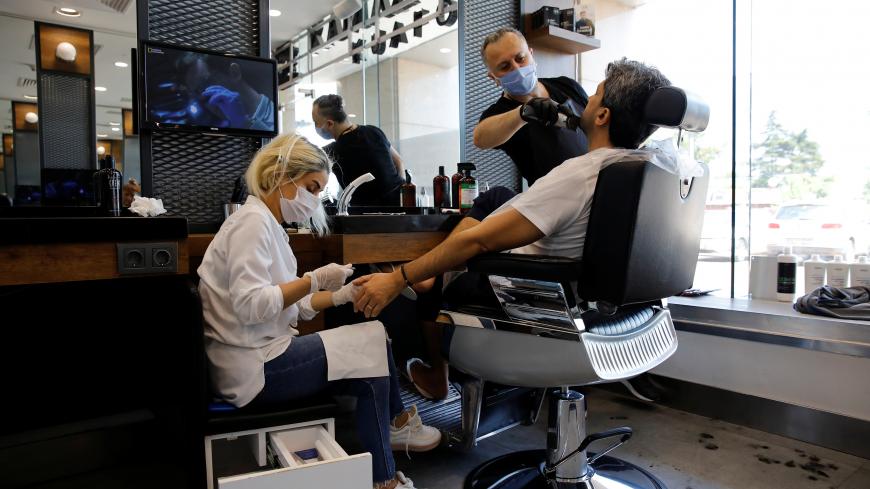 An employee trims the beard of a client as another gives him a manicure on the first day of the reopening of a hair salon closed since March 21 amid the spread of the novel coronavirus in Istanbul, Turkey, May 11, 2020. - REUTERS/Umit Bektas

ISTANBUL — Wearing face masks and standing meters apart, Istanbul residents lined up outside reopened shopping malls Monday as urban areas across Turkey began to ease coronavirus measures in a cautious effort to resume normalcy as new infections continue to decline in the country.

For the first time in nearly two months, shopping malls, barbershops, hair dressers and some stores reopened in Turkey today as citizens sought to get back to work and lawmakers looked to bolster an economy battered by the global pandemic.

Strict social distancing and hygiene provisions remain in place, with shoppers’ temperatures screened at mall entrances, but not all eligible stores reopened for business as managers remain wary of the threats posed by the novel coronavirus, which in Turkey has been most prevalent in Istanbul with about 60% of cases recorded nationally.

An employee who requested to remain anonymous at the Kanyon mall in Istanbul's Levent district said 16 of about 160 stores in the shopping complex had opened Monday.

“The shops that opened today were willing to do so, while many decided to remain closed despite having permission to conduct business,” the employee told Al-Monitor.

Lukas Nemela, a spokesperson for ECE, a Hamburg-based company operating shopping centers in Europe and the Middle East, said the owners of the 10 shopping centers managed by the company in Turkey all left the decision to reopen stores to individual tenants, and the same operators agreed to reduce rents for tenants amid the pandemic.

Food venues remain closed inside and outside shopping malls, but most stores are expected to reopen in the coming weeks. Hotels and restaurants are currently slated to reopen May 27, though the sectors will need to abide by new health measures to prevent a resurgence in infections.

Speaking of future impacts on the retail sector, Nemela said consumers must adapt to a “new normal,” in which hygiene and social distancing measures will remain the norm in the foreseeable future, but economic pressures may prove insurmountable for some businesses.

“Since we expect the situation to last and the consumer climate to [cool down] over the next [few] months, there is the danger of insolvencies in the retail sector,” Nemela told Al-Monitor.

The pandemic is causing strain on all levels of the retail industry as shopping mall operators were hit by with a double blow of temporary closures along with a decline in the value of the Turkish lira against most foreign currencies.

“This means that the investors will suffer an approximately 30% loss in their rental incomes for this year,” Altas told Al-Monitor, adding the association expected a further 10-15% decrease in rental incomes in the months to come.

He continued, “Overall, it is safe to say that the earnings of shopping center investors will decrease by 40-45% this year,” Altas told Al-Monitor.

Malls reopened amid some positive economic news Monday: The Turkish lira recovered slightly against the dollar after the nation’s banking regulator lifted a four-day ban on trading liras with BNP Paribas SA, Citigroup Inc. and UBS Group AG. The move after the lira fell to a historic low, hitting 7.25 per dollar last week.

The Turkish Statistical Institute also released the latest job market data, reporting that unemployment fell to 13.6% in February, down 1.1 percentage points year-on-year, though the figures predate the first confirmed coronavirus case in Turkey, recorded on March 11.

In a speech Sunday, Turkish President Recep Tayyip Erdogan acknowledged the disruption caused by the coronavirus to the nation’s health system, the economy and people’s daily routines but maintained that a gradual reopening of businesses, schools and flights would prove successful only if citizens adhered to strict precautions.

“If we abide by the measures we have taken, we will be able to be through with this in comparison to the other countries,” Erdogan said, while opening a new metro line in Istanbul Sunday.

More than 4.13 million cases of infection have been recorded globally and the virus has caused at least 282,000 deaths worldwide. In Turkey, health officials have recorded 139,771 confirmed cases and 3,841 coronavirus-linked deaths as of Monday.