Iran’s president has rejected calls for quarantine against the coronavirus with no explanation, but his reasoning seems to be related to the economic devastation following the US sanctions. 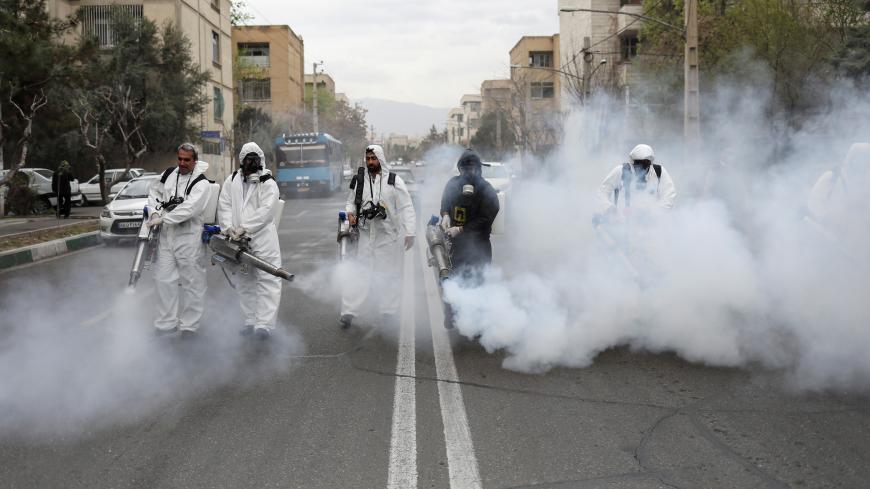 Firefighters wear protective face masks against the novel coronavirus, as they disinfect the streets, ahead of the Iranian New Year Nowruz, Tehran, Iran, March 18, 2020. - WANA/Ali Khara via REUTERS

As Iranians were preparing to put behind them a bitter year full of sorrowful events, the coronavirus appeared as an unexpected and unwanted guest, destroying their plans to celebrate the Persian new year on March 21.

Though the Iranian public expects the government to place cities with high concentrations of coronavirus cases under quarantine, President Hassan Rouhani has refrained from doing so. His administration has not said a word about the reasoning behind the decision, but US economic sanctions seem to be playing a central role in preventing the Iranian government from taking the most obvious measure to curb the spread of the COVID-19 virus.

Iran’s first confirmed case was reported just one day before the parliamentary election on Feb. 21. Soon, Iranian media outlets were full of reports and warnings, urging people to take precautions.

Iran’s holy city of Qom, the site of a Shiite holy shrine and Iran's grand ayatollahs, has been recognized as the epicenter of the virus in Iran with hundreds of confirmed cases. Officials have pointed to Chinese laborers and an Iranian merchant as originally bringing the virus to the city.

As the days have passed and people keep hearing worrisome news about the rising death toll, many wonder why the government is still unwilling to enforce quarantine measures. The public is especially angry with religious authorities, as they assume clerics were behind the government decision not to quarantine Qom. Soon, the grand ayatollahs based there announced that everyone must follow the orders of physicians and government decisions to limit the virus’ spread. Chief Justice Ebrahim Raisi said March 9 that the religious authorities have not opposed putting Qom under quarantine.

But rage at Iranian officials has risen as the infection quickly spread from Qom to other provinces, and see Italy extending its strict quarantine measures nationwide. Despite the public’s demands and calls from some politicians, Iran’s president declared March 15 that no city would be put under quarantine. This is while Iran’s hospitals across the country are on the verge of a terrible crisis as they stretch the limits of their capacity. Very soon, they won’t be able to accept new COVID-19 patients.

Rouhani wrote a letter March 14 to world leaders that the country’s effort to contain the outbreak was “severely hampered” by US sanctions and urged other nations to ignore them. US Secretary of State Mike Pompeo, in remarks March 20, said medical supplies have never been included in the sanctions.

Albert Boghzian, an economics professor at the University of Tehran, told Al-Monitor, “The sanctions have blocked our access to our foreign exchange reserves and our foreign income while making transactions costly for us. At the same time, we are facing an oil embargo, and this means a decline in our foreign exchange earnings. Simultaneously, we have a grave problem with purchasing equipment and technology, as no foreign company dares to make a deal with us.”

Mentioning the quarantines in China, Kuwait and Italy, Boghzian speculated as to why Rouhani hasn’t followed suit.

“When there’s a quarantine in place, the government should provide some services to people, including an amount of money and even packing and delivering food and other needed things. Under such circumstances, a government does anything to make people stay at home,” Boghzian said. “If the government had no budget deficit and could purchase necessities from local and foreign factories to distribute among people, and could provide laborers and workers with their monthly income, then the quarantine could be enforced.”