No sanitizers, fresh food or distance in some of Gaza's quarantine centers

Gaza quarantine centers, which are mostly converted from schools and hotels, lack the basic necessities such as fresh food and sanitation that are necessary to survive the coronavirus pandemic. 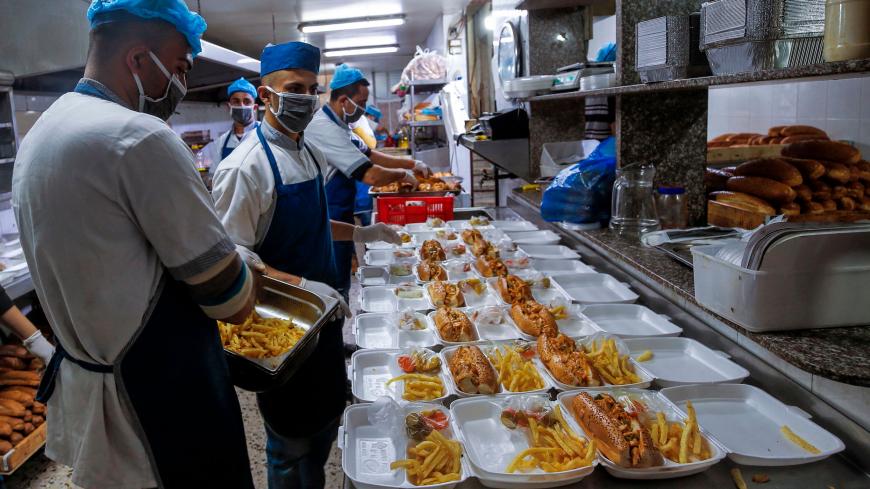 “A week into our arrival, I complained to the Independent Commission for Human Rights about the lack of vegetables and fruits, so they started providing us with two pieces of vegetables or two pieces of fruits with lunch, but there are still no herbal drinks, supplements or vitamins,” 31-year-old freelance journalist Sahar al-Dahleez, who has been in quarantine since March 25, told Al-Monitor. Dahleez was placed in the Kuwait Secondary School for Girls in the Jabalia governorate north of the Gaza Strip after she entered the country through the Erez crossing between Israel and northern Gaza. She spoke to Al-Monitor on April 7 — her ninth day in quarantine.

Dahleez’s arrival at the crossing coincided with the arrival of seven prisoners released by Egyptian authorities after they completed their sentences.

“We were told that the Ministry of Health would take care of us and that the released individuals would be in another quarantine center under the auspices of the Ministry of Interior. But in the end, we were all quarantined in the same center,” she said.

With the spread of the coronavirus, the Ministry of Health in Gaza forced all those who arrived in Gaza on March 15 into quarantine centers that were once schools and hotels.

Dahleez noted there were a total of 60 people in quarantine —10 of them women — in her center. “The security service at the center treats women as if they are in prison and not in quarantine. They threaten to turn us over to the women's police should we fail to adhere to the instructions,” she said.

“It is forbidden to engage in any cultural or sports activity. We are only allowed to go to the schoolyard between 2-11 p.m.,” she said, adding that they mostly stayed in their rooms where they would shower and wash their clothes. Unlike some other centers, everyone has their own room where Dahleez is quarantined.

She complained that they lacked the most basic needs, as only one small hand sanitizer has been provided along with a bottle of Dettol three days into their arrival at the center. The staff disinfected their rooms on the first day of the arrival, but that was the only time they did so.

Dahleez said the medical staff in the center only takes their temperatures, checks blood pressure and conducts diabetes screenings for the elderly. “They have little awareness about health issues let alone psychology,” she added, explaining that the psychological conditions of those under quarantine are deteriorating. They have been told they would only take the coronavirus test on the 19th day of their isolation, so there is no way of knowing for sure whether or not they are positive.

Amal Barika, a journalist who on April 6 left quarantine after 21 days at the Rudolf Walther School in Deir al-Balah in the central Gaza Strip, agreed that the staff in the quarantine centers were hardly competent or informed. “Their activities for creating awareness was limited to hanging educational posters on the doors of the classrooms,” she told Al-Monitor. But security forces treated them well, she said.

While in quarantine, Barika would walk for an hour with her brother, who was in quarantine with her, and then she would do a little work.

She said the center in Deir al-Balah is gated and consists of four schools, explaining, “We were about 350 people. Given the nature of my work, I would tour the four schools but I took all the necessary preventive measures."

She confirmed that they were tested for the coronavirus 19 days into their arrival at the center, though the medical staff took their temperatures regularly throughout their stay.

“After the results came out, we all shook hands as a way to celebrate the fact that we knocked down the virus,” Barika added.

One major issue those in quarantine deal with is trying to keep their spirits up. In one activity, residents of the Mahfouz El Nahnah High School in the Gaza governorate competed to read the Quran as many times as they could from beginning to end. An award was given to the winner, who read the Quran five times. The top award was a smartphone, but all participants received a prize.

Raed al-Ghafari, owner of Al-Raed for Aluminum and Granite Kitchens, initiated the competition and donated the awards on April 4. He told Al-Monitor the aim of the competition was to reduce mingling in the center as much as possible, especially in light of the lack of awareness of the importance of washing and disinfecting hands and clothes and social distancing.

The school had put several people, sometimes as many as five, in the same room. This was before Al-Mezan Center for Human Rights called April 5 for banning collective activities inside quarantine centers in order to prevent the spread of the virus. The center also warned that quarantined individuals should be in individual rooms to ensure the virus is not transmitted from one potentially infected person to another.

“I proposed this competition as a way to [social distance] and to find a way to prevent conflicts between people who were tense because they live in close quarters,” Ghafari said, adding, “My roommates and I made sure to keep our gloves and masks on the entire time, and we kept a distance of three to four meters between each other as a precaution.”

Ghafari, who is now out of quarantine, said days in the center had not been easy as many conflicts emerged due to the difference in cultures and ages and the presence of more than five individuals in the same room. Police were often called to settle people down.

He said the food was not healthy and did not include any soups, vegetables and fruit — only fast and processed food were served, which caused gastrointestinal problems. “We had no access to herbal drinks that could boost our immunity. We were under great psychological pressure because we feared being infected with the coronavirus, but we had not been tested. Nor were our temperatures taken once throughout our stay,” he said.