How is Gaza dealing with COVID-19?

While the UNRWA turned schools in the Gaza Strip into clinics to provide treatment for patients with respiratory diseases, the Ministry of Health is turning schools into quarantine centers where those arriving to the Gaza Strip are kept as a precautionary measure against COVID-19. 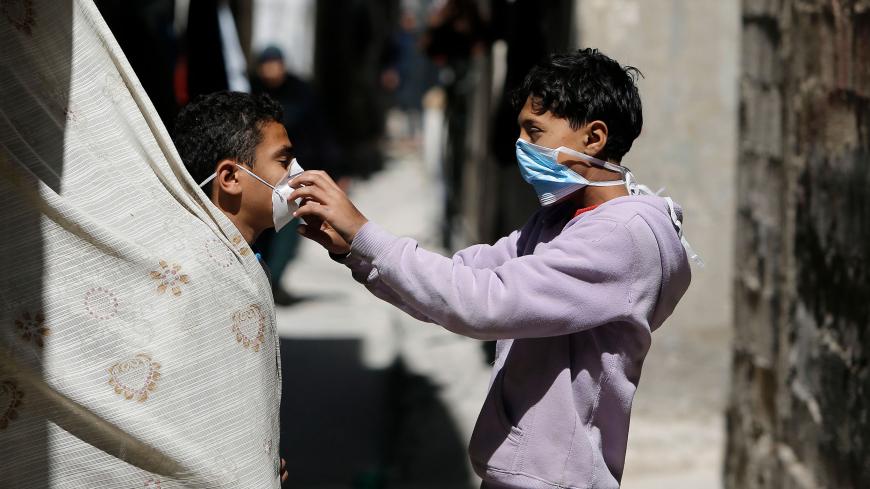 GAZA CITY, Gaza Strip — The UN Relief and Works Agency (UNRWA) in the Gaza Strip began on March 18 placing patients with respiratory diseases in Gaza schools that the UNRWA converted into medical clinics. This followed its March 16 decision not to receive such patients in its medical clinics as a preventive measure to ensure the safety of other patients and families and to prevent the spread of the novel coronavirus. The UNRWA stressed that all schools will be sterilized before classes resume and its schools will not turn into quarantine centers for those returning to the Gaza Strip from the Rafah or Erez crossings.

Meanwhile, the Hamas-run Ministry of Health began on March 15 turning two schools in the southern city of Rafah into quarantine centers where those entering Gaza are placed as a precautionary measure against spreading the coronavirus. Although such a measure has angered citizens, the ministry said it had no other choice and carried on with equipping other schools as well. Speaking to Al-Monitor, Ashraf al-Qidra, a spokesman for the Health Ministry, said there are 15 schools serving as quarantine centers in the Gaza Strip, and the ministry is equipping more schools for those arriving into Gaza.

Qidra said that when the coronavirus outbreak quickly turned into a pandemic — with the epicenter of the outbreak identified by Centers for Disease Control and Prevention as Wuhan, China — the ministry took precautionary measures in line with the World Health Organization's recommendations, including taking the temperatures of people coming from infected countries at the crossings and requiring their personal pledges not to leave their homes and to refrain from being in contact with other family members until their 14-day quarantine is over.

But, Qidra said, the outbreak and ensuing crises required turning the schools into quarantine centers to protect the community, given the nature of social life in the Gaza Strip, Qidra said. He said the ministry worked to ensure that schools complied with international health standards, especially in terms of people keeping a safe distance from one another. He pointed out that the community has become more aware and cautious.

Qidra said those placed in quarantine are classified by the date of their arrival to the quarantine centers and are only allowed to leave once the 14-day period is over. Citizens are still arriving in Gaza, as other countries are not preventing Gazans from returning to the Gaza Strip through the Rafah or Erez crossings.

He stated, “There are 1,287 people in quarantine, divided into 20 [quarantine] centers.”

Commenting on the two citizens coming from Pakistan who tested positive March 21, he affirmed necessary measures were taken and they were moved from the school where they were quarantined into a new field hospital constructed near the Rafah border crossing. Qidra explained the hospital was established to "isolate infected cases" and can "accommodate 38 cases or more.”

Qidra said the two showed no complications, and 29 people who came into direct or indirect contact with them were isolated in the new Rafah hospital. Out of the 118 cases tested in the Gaza Strip, only two tested positive, he added.

He said the health and humanitarian situation in the Gaza Strip is vulnerable due to the Israeli siege that destroyed the health care system, although those in the Strip are attempting to make the most of its potential given its limited capabilities. “The United Nations is warning against the dangerous consequences of a potential coronavirus outbreak on the collapsing health care system in Gaza,” Qidra said.

He continued, “We have a 50% shortage of medications and medical supplies, in addition to the shortage of lab tests, and severe medical staffing and facilities shortages. This is why the health care sector faces [many] challenges. This is true particularly since the powers with huge capabilities have failed to place [the coronavirus] under control, let alone the besieged Gaza Strip [with its limited capabilities].”

Qidra called on the international community and UN agencies to assume their roles and provide urgent aid — including ventilators, intensive care devices, safety and protection supplies, and fundamentals — so that the Gaza Strip can better prepare, particularly since it is a densely populated area. He said things will be especially difficult if the coronavirus spreads there, and he considers Israel and the international community responsible for the lives of 2 million Gazans.

Ansam Khalifa went to the Gaza elementary school for boys west of Gaza City — now a UNRWA medical clinic — to see a doctor about her son’s flu and high temperature. She told Al-Monitor the UNRWA decision to turn schools into clinics was a poor choice because the schools are not suitable for such purposes; she pointed at the long wait time before seeing a doctor.

“A minimum distance of 0.1 meter is kept between one another in the waiting yard. Yet the place is not being sterilized after the departure of a patient. More precautionary measures are required,” she said.

Khalifa said she fears a virus outbreak in the Gaza Strip and is remaining home as much as possible, only leaving if it is absolutely necessary.

Amer Judeh, who was also waiting for treatment for his son, told Al-Monitor the situation at the school is way better than it was at the clinics because the wait time is less and there are fewer chances to be infected. “The UNRWA is trying to make the most of its potential and facilities. The only options available are the schools. Yet it is required to take more precautionary measures,” he said.

He said “the school library has turned into a pharmacy and the classrooms into examination and treatment areas. I don't know whether that will have a psychological impact on the students when they return.”

He pointed out that not all medications are available at the clinic, which requires buying them from private pharmacies. Judeh said these medications must be made available to ease citizens' burdens.