Dozens of individual and community-based initiatives were launched in the West Bank following the declaration of a state of emergency when COVID-19 infections were detected in Bethlehem. 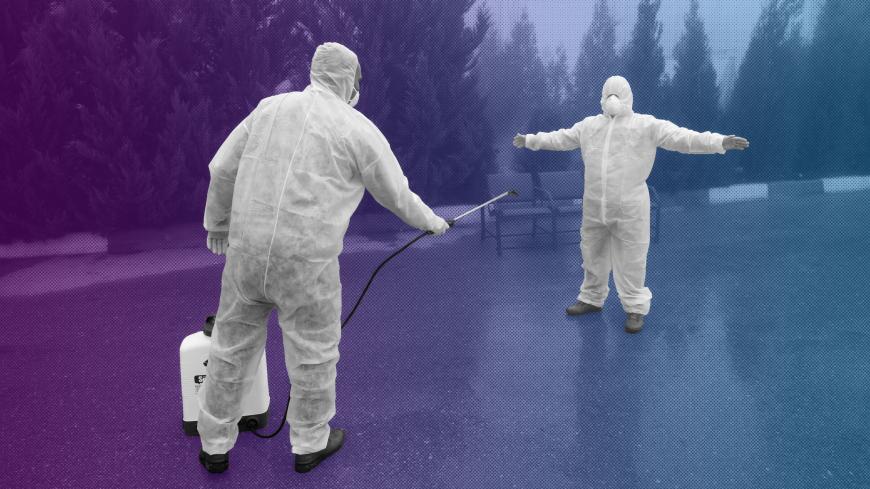 A member of a medical team sprays disinfectants to sanitize the suit of his colleague in a Red Crescent-run hospital, which will be used for coronavirus quarantine, near Hebron in the Israeli-occupied West Bank, March 17, 2020. - REUTERS/Mussa Qawasma

RAMALLAH, West Bank — The Palestinian Authority (PA) faces major challenges, especially at the financial level, to confront the spread of coronavirus in the Palestinian territories. The PA asked Israel to transfer its withheld clearance funds, according to government spokesman Ibrahim Melhem at a press conference March 22.

According to Hebrew Channel 13, the Israeli government will release 120 million shekels ($33.5 million) from the tax revenues that it collects on the PA’s behalf. The decision was made based upon the recommendation of Israeli security leaders. They fear the coronavirus could spread uncontrollably if the PA is unable to contain it, which could lead to the PA's collapse.

At the local level, dozens of Palestinian individuals and institutions launched initiatives to help the government and infected persons in the Palestinian governorates. Most notably, Nablus governorate institutions launched a fundraising campaign March 17 for the National Solidarity Fund to confront the coronavirus. Donations will be allocated to ensure the treatment of those infected and help poor families.

Confirmed cases in the West Bank and Gaza Strip reached 59 as of March 23. Seventeen of those cases were declared to be recovering in Bethlehem. On the evening of March 22, the West Bank instituted a 14-day lockdown, banning the movement of citizens between Palestinian governorates and preventing citizens from leaving their homes unless necessary.

Youssef Abu Zneid, 23, from Shuafat refugee camp in East Jerusalem, canceled his wedding ceremony scheduled for March 14, after months of preparation, in the wake of the outbreak of the coronavirus in the West Bank.

Abu Zneid donated the meat, rice, water and soft drinks intended for his wedding celebration to the Bethlehem Zakat Committee for distribution to residents quarantined in the city.

Bethlehem, in the southern West Bank, is the area's coronavirus epicenter. As of March 16, 39 people have been diagnosed with the virus across the West Bank, including a young man from Tulkarm, in the north of the West Bank, who arrived from Poland.

Abu Zneid’s act of kindness is one of dozens across the West Bank since President Mahmoud Abbas issued a decree March 5 declaring a state of emergency to face coronavirus.

Palestinian Prime Minister Mohammad Shtayyeh also issued a series of orders, including the closure of schools and educational institutes, from kindergartens to universities.

The various initiatives in the Palestinian territories expressed social solidarity against the outbreak of the virus. One initiative covered the educational sector, which has been completely disrupted.

An e-learning platform, Iteacher, offered its services free of charge to students during the first days of the state of emergency. This is after getting the Ministry of Education’s approval.

Iteacher's founder, Abdullah Qadah, said the platform has been operating for three years. All of the Palestinian curriculum lessons for the secondary cycle were entered on the platform by 17 teachers from the West Bank.

“The lessons on the platform are arranged according to the school textbook,” he told Al-Monitor. “We offer solutions to the curriculum problems, self tests and a window for interactive learning between the teacher and students.”

Before the state of emergency, the platform was available to students for a nominal subscription of 100 shekels ($28) per student. It includes all student materials throughout the school semester. “But after declaring the state of emergency, the officials in charge of the platform addressed the prime minister and placed the platform under the government’s disposal," he said. "After the Ministry of Education examined and approved its contents, the platform became available free of charge to all students throughout the emergency period.”

Qadah explained that the 8,300 videos on the platform are easily accessed via the platform's website or its mobile application. “This initiative aims to provide education for all, especially since the educational process and students need similar initiatives to not lose their semester,” he said.

On March 14, the Palestinian telecommunications company Paltel announced it would soon launch an initiative to increase internet speed for subscribers free of charge to support e-learning.

Birzeit University launched an e-learning initiative March 9 through a group of academics and the university's information technology department.

Aziz Shawabkeh, assistant to the president of Birzeit University, told Al-Monitor, “Online teaching targets 14,000 students, with the contribution of 450 university professors. The initiative seeks to save education in Palestine and meet the students’ learning needs. It relies on a set of free software that the university has been using for a long time, such as Moodle. Most lectures are given online.”

Initiatives were not limited to the educational level. Hebron Chamber of Commerce and Industry sent a convoy of food and medical aid to Bethlehem on March 7. Another convoy was dispatched from the Aghwar Shamaliyah, loaded with vegetables and legumes March 9.

On March 12, the governorate of Jericho and al-Aghwar also dispatched a food and medical aid convoy, which included water, food items, preventive medical supplies and sterilization pumps. On March 15, the Nablus governorate sent 15 tons of fruits and vegetables.

This was not limited to the governorates. The dairy company Hamoda Group also sent food items and sterile materials to Bethlehem on March 12. Meanwhile, businessmen in Hebron launched a campaign in cooperation with the Chamber of Commerce and Industry of Hebron to collect 200,000 face masks to be sent to Bethlehem.

Director of the Hebron Chamber of Commerce and Industry, Tareq al-Tamimi, told Al-Monitor, “When the crisis in Bethlehem broke, we asked city officials about their needs, such as N95 respirators, sterilizers and mineral water. We managed to quickly meet these needs.”

Tamimi pointed out that the Chamber of Commerce and Industry of Hebron supported a plant in the governorates to manufacture a disinfectant gel to be sold at a low price. The chamber also supported another factory in Hebron producing face masks under the supervision of the Palestinian Standards and Metrology Organization. “Hebron has opened a line of production of protective clothing worn by physicians and security personnel when dealing with the infected persons,” he added.

Since the government announced a total lockdown March 6, Bethlehem has been in a state of paralysis. This placed the government, which was already battling a financial crisis, in an unenviable position. Yet individual and community initiatives could help the government deal with the repercussions of the lockdown.

Kamel Hamid, the governor of Hebron, told Al-Monitor, “We are facing a serious crisis, but this has shown the spirit of initiative and popular solidarity at the national level. These initiatives raise citizens’ morale. The city is in dire need of medical equipment and tools. The coronavirus took us by surprise; this required doubling quantities of all medical supplies.”

He continued, “We have thousands of people under house quarantine, and 8,000 workers have lost their jobs, whether in Israel, hotels or the tourism sector. In the absence of an official intervention to save the situation, things will keep going downhill.”