Palestinians tell Trump, Israel: We are not for sale

The Trump administration boasts of a generous economic framework offered to the Palestinians, while in truth it hopes the private sector will come up with the funds. 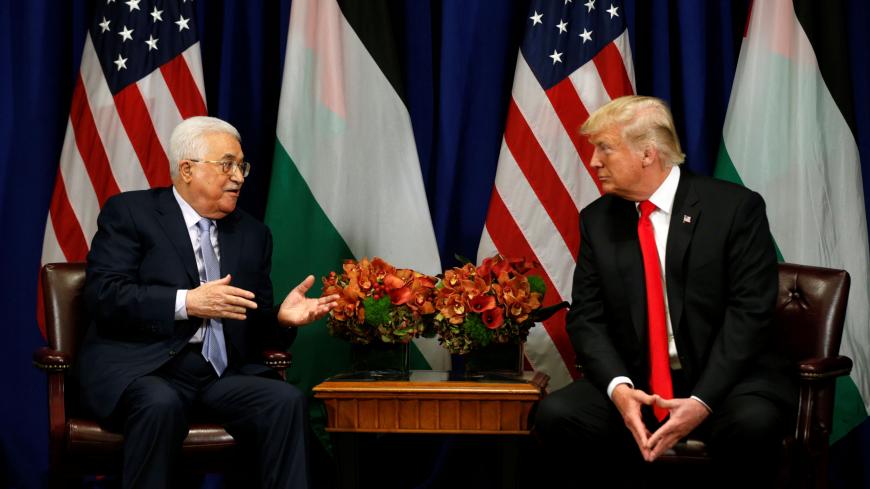 Palestinian President Mahmoud Abbas made a respectable, reserved appearance at the Feb. 11 session of the United Nations Security Council, regarding US President Donald Trump’s "deal of the century.” As anticipated, Abbas was excoriated. Danny Danon, Israel’s envoy to the UN and Prime Minister Benjamin Netanyahu’s right-hand man, announced that so long as Abbas leads his nation, there is no chance for peace. After the speech, Ehud Olmert, former Israeli prime minister who spent time in prison afterward, met with Abbas in New York; this earned a hysterical announcement on Netanyahu’s part as he called their meeting “a historical low.” He did not explain what was Olmert’s “crime” in meeting with a Palestinian leader who signed an agreement with Israel, fights terror and calls the security cooperation with Israel “sacred.”

But as the days go by, the severity and the dangers of the deal become clearer. The Palestinians view it as a slap in the face because what is being offered to them is only partial autonomy, constituting an enclave within the State of Israel; a capital city on the very outskirts of East Jerusalem; and an Israeli veto on the number of Palestinian refugees they will be permitted to absorb in their country. Since the publication of the plan, the Palestinians succeeded in averting a positive response to it from the Arab League and from the Organization of Islamic Cooperation. As for the West Bank Palestinians, Abbas now enjoys sort of a comeback. On the one hand, he succeeded in orchestrating well-attended demonstrations against the program. On the other hand, Abbas managed so far to avert the deterioration of these protests into violent confrontations against Israeli security figures and Israeli citizens.

Now that the defense system has studied the program carefully, severe reservations can be heard also on the Israeli side. The first reservation concerns the lengthening of the Green Line border (the 1949 armistice line) from 311 kilometers (193 miles) to 1,400 kilometers (870 miles) in Trump’s plan. It would be almost impossible to guard such a long border, given current military factors. Also, imposing Israeli sovereignty on 15 settlement blocs in the heart of the Palestinian state assigns overwhelming responsibility to the defense system, a task they have no idea how to enforce. The army might have to decide between settling for "formal authority" but with no practical ability to reach the Israeli enclaves when needed, or posting numerous forces in these enclaves that are disproportionate to the number of settlers who would remain.

And then we get to the economic part of the program. Trump, with his tremendous experience in accumulating capital and declaring bankruptcy, sees the world through his money box. He believes that ultimately, anyone and everyone can be bought. Those who are ostensibly “set up to be sold” become furious. (“All our rights are not for sale,” said Abbas.) But once we take a serious look at the economic program under discussion, it becomes clear that Abbas is not giving up on a very big temptation.

True, the deal talks about $50 billion toward implementation. But this is not a check that can be signed over to the Palestinian Authority (PA) once it agrees to that same future state that Abbas called “swiss cheese.” The sum of money is also supposed to compensate other countries (mainly Jordan and Israel) for absorbing refugees since 1948 — Jordan absorbed a very large share of the Palestinian refugees and even awarded them citizenship (as opposed to the other Arab countries). Israel absorbed Jewish refugees who were forced to leave the Arab countries after the establishment of the state. After these sums will be deducted, $28 billion will be left for the Palestinians. And since this is a 10-year plan, the Palestinians will receive only $2.8 billion a year. If we add the yearly contributions sent by the donor countries to the Palestinians to the funding that is sent every year to the United Nations Relief and Works Agency for Palestine Refugees, then the difference (with the promised $2.8 billion in Trump’s plan) is not much. As far as the Palestinians are concerned, the offered deal of the century is no great bargain.

But even beyond that, we must remember that the sums cited above are not promised by the US administration to the Palestinians. It is widely known that Trump believes that the United States has showered huge sums of money on the world without receiving much in exchange, and that the time has come for others to come up with the money. This was expressed in the Bahrain economic workshop last year, a convention led by Jared Kushner, Trump’s son-in-law and senior White House adviser. This convention only dealt with the economic aspects of Trump’s program. What emerged from Bahrain was that the US administration aims for the Gulf states to lead the big investments in infrastructure and other spheres in the PA. Moreover, the Trump world view insists on much involvement of the private sphere in the process. Thus, the hope is that the big investors would not be governments but private business sectors.

However, private investors do not generally invest in places that their governments want — unless, perhaps, they receive incentives that ensure their investment and associated profits. When a government is ready to offer such a convenient safety net, this means that we are talking about governmental investments via private agents and not projects led by the private market.

Investors want to make sure that the country in which they invest is stable; that the country’s regulations will allow them to receive their profits without unnecessary complications; and that the country has a legal and judiciary system that will act appropriately if any kind of disagreement erupts between them and local agents. This, however, is not the case in the PA, which only receives very modest investments and even these are usually due to ideological motives, not business ones. This is also the reason that the donor countries continue to invest money over many years via infrastructure entrepreneurs and others. That's why it is hard to believe that business brokers will be willing to risk their money and invest in the projects that were displayed in the program. For the PA to be able to draw investors, it needs to focus first on building an institutional system. Former Palestinian Prime Minister Salam Fayyad had begun working on this, until he was forced to resign. Obviously, this first step is a vital one that must be implemented before there can be talk of grandiose investment programs.

Three weeks after publication of the deal of the century on Jan. 28, the world understands that it is all about empty concepts — Palestinian state, territorial exchange and Palestinian capital in East Jerusalem. Many Israelis understand that Israel would have been better off if this deal had never seen the light of day. Even the economic aspects of the deal are revealed as a hopeless, if glittering, vision.