The current political and economic landscape in the Palestinian territories may not favor a conference for Arab investments, which the Palestinian Authority is banking on to boost its economy. 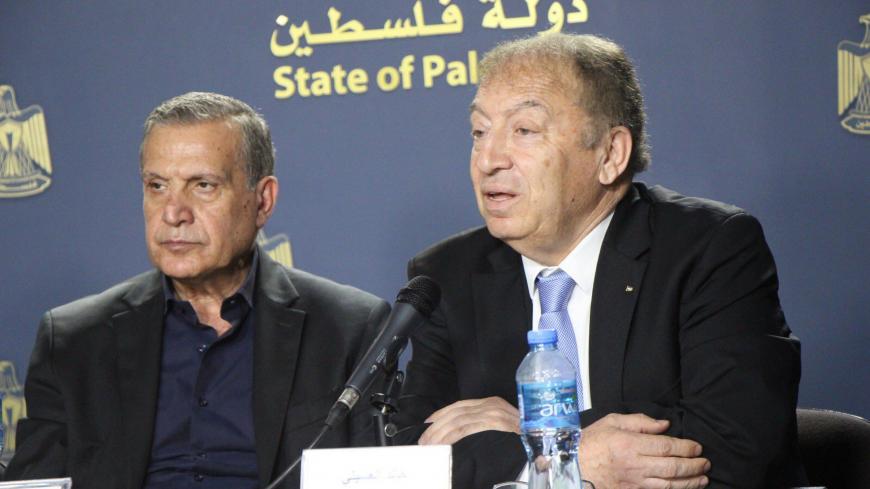 Palestinian Minister of Economy Khaled al-Asaily told Al Jazeera Sept. 20 that preparations are underway to hold an Arab investment conference on Palestine, in Cairo before the end of 2019. The conference in particular would focus on real estate investment, under the Arab League’s umbrella, with purely Arab initiatives, away from the US "deal of the century."

During his participation in the 104th session of the Arab League's Economic and Social Council in Cairo, which took place Sept. 4-6 and was chaired by Palestine, Asaily said, “The discussion focused on investments in Palestine, which prompted a United Arab Emirates participant [unidentified] to propose an investment conference on Palestine. However, we asked that the conference be under the umbrella of the Arab League, not other parties.”

Palestinian sources who accompanied Asaily to Cairo told Al-Monitor on condition of anonymity that the man behind the idea of the conference was Emirati businessman Ahmed al-Suwaidin, president of the Arab Union for Investment and Real Estate Development, affiliated with the Council of Arab Economic Unity (CAEU) at the Arab League.

An official at the Palestinian Ministry of Economy told Al-Monitor on condition of anonymity, “Preparations for the conference began as invitations on behalf of both the Palestinian Authority [PA] and the Arab League are being prepared to be sent out to Arab businessmen. Asaily has recently held several meetings and discussions in this regard, namely with CAEU Secretary-General Mohammed al-Rabie, Arab Union for Investment and Real Estate Development Deputy Secretary-General Adnan Abdel-Jabbar, Egyptian Minister of Investment and International Cooperation Sahar Nasr, and a number of Arab officials and businessmen to urge them to participate in the conference.”

PA officials believe the conference has strategic importance for the Palestinian economy, in terms of enhancing the possibilities of implementing promising Arab investments in various economic sectors in Palestine, especially as it coincides with the PA’s efforts to disengage from the Israeli economy and resort to Arab countries.

Al-Monitor learned from government sources in Ramallah that the preparatory committee of the conference recently started convening in Ramallah and discussed the activities that will be held during the conference, including bilateral meetings between Palestinian businessmen and their Arab counterparts, to show the available investment opportunities, set up economic partnerships between the two sides and organize an exhibition of Palestinian industries with high export capacity. The conference’s objectives further focus on breaking the stereotype in how Arab investors perceive the Palestinian economy.

Samir Abdullah, former minister of labor and planning in Ramallah and senior researcher at the Palestine Economic Policy Research Institute - MAS, told Al-Monitor, “The conference is a response to the Bahrain Economic Conference, which was related to the deal of the century. It would bring Arab investments to Palestine, especially with the development of investment-attracting infrastructure for water, electricity and telecommunications facilities. However, the conference — which is held at an inappropriate political time given the deadlock in the Palestinian-Israeli relations and the stalemate in the political negotiations with Israel — is not an appropriate framework to provide financial support to the PA, which is burdened by a severe financial crisis.”

The conference will be held before the end of this year, amid a large Arab preoccupation with economic issues that Arabs may consider more dangerous than the Palestinian situation, such as the reconstruction of Syria and Yemen. This is why the volume of Arab interaction and the involvement of the Arab private sector in the Palestinian economy through the conference may not top the concerns of Arab businessmen, in light of regional priorities that they may deem more important.

Arab investors traveling to the West Bank are required to obtain entry permits from Israel, which is the subject of an Arab-Palestinian dispute, for fear of being accused of normalization with Israel. This is why only a few Arabs in general visit the West Bank.

Mohammed Abu Jayab, editor-in-chief at the Gaza-based Al-Eqtisadiah newspaper, told Al-Monitor, “This conference is linked to the Bahrain conference — although the PA claims otherwise — as it is difficult to hold an Arab conference without US approval. The conference could include the achievement of projects mentioned in the US peace plan, such as the establishment of commercial and industrial zones, the establishment of a corridor between the Gaza Strip and the West Bank, and the modernization of power lines in Gaza. But this time, these projects may be presented [at the Arab conference] as Palestinian demands to which Arabs could respond. This conference could lead to projects being implemented in all the Palestinian territories, including Gaza, and Egypt is playing a leading role in this.”

Israel is not expected to provide concessions to Arab investors to carry out their projects in Areas A and B of the West Bank, as these areas — which represent over 40% of the total West Bank area — are under full Palestinian control. So Israel is not the decision-maker there.

Osama Nofal, director general of the Planning and Policy Department at the Gaza Ministry of National Economy, told Al-Monitor, “Gaza has no knowledge of the conference. We heard about it through the media. There is no coordination between the ministries in Gaza and Ramallah, so we fear the conference will ignore the situation in Gaza although it is in dire need of Arab investments, especially since there is great geographical convergence between Gaza and Egypt. It is true that the Palestinians may count on the conference to provide Arab assistance to the PA, but past experience has shown Palestinian hopes were shattered when it came to providing Arab financial security. Arab reluctance to support the Palestinians is clear, and Arab financial flows to the PA are gradually declining.”

Meanwhile, the conference aims to encourage Arab investment in the West Bank. But this area is experiencing political tensions with Israel, and Palestinian areas are being turned into scattered cantons. These conditions can hinder investment and create a discouraging environment.

The conference is also being set in motion amid a Palestinian economic and financial crisis that may be unprecedented, due to the United States suspending support, Israel withholding Palestinian tax funds and Arab financial support declining, which raises serious doubts about the conference succeeding in overcoming all these obstacles.