Israel, Palestine both stand to lose by cutting economic ties

If President Mahmoud Abbas follows through with threats to end the Palestinian Authority's economic cooperation with Israel, there will be wide economic repercussions for both sides. 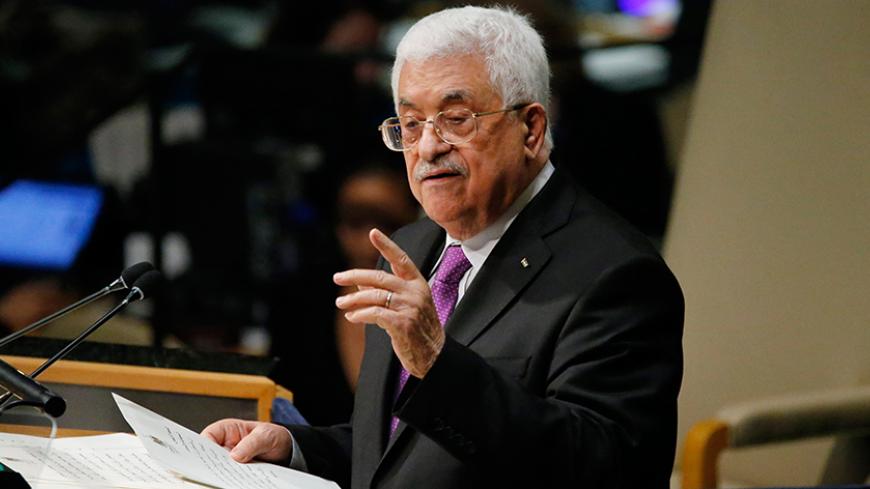 RAMALLAH, West Bank — The Palestinian people were divided following President Mahmoud Abbas' speech at the United Nations General Assembly on Sept. 27. Many supported the president and the message he conveyed, while others disagreed with him. But everyone agreed that should his ideas be implemented on the ground, it would create a new reality for Palestinians on all levels. The political game would also change and affect the Palestinian economy, but how? Will this be a dramatic change, and will its repercussions affect us directly?

Many of the citizens who spoke to Al-Monitor believe that the Israeli state will be the biggest loser, while the Palestinian people will win. They also think that the Israeli government’s angry reaction to the speech is intimidation, nothing more.

Abed Raouf Mohammed from Gaza told Al-Monitor, “The Palestinian Authority’s commitment to the Paris Protocol — which the Israeli side does not abide by — has suffocated the PA. The protocol states that the Palestine Liberation Organization has the right to negotiate and conclude commercial deals on behalf of the national Palestinian authority, so long as the import policy applied in Israel is also applied in the West Bank and the Gaza Strip. This has a negative impact since the PLO does not represent all Palestinians. In addition, this protocol is subject to the many Israeli security measures imposed on the Palestinian economy. Yet, should economic agreements end, the PA, whose economy is dependent on the Israeli side, would be the loser.”

Meanwhile, Khaled Awad from Ramallah told Al-Monitor, “The biggest loser after ending the economic cooperation and agreements between both parties would be Israel, since the West Bank and Gaza Strip represent a great market for Israeli products. Israel makes major profits from its trade with the West Bank and Gaza. Should this trade end, it will lose all this great profit.”

Abeer Odeh, the Minister of National Economy for the Palestinian government, told Al-Monitor, “Both parties have been committed to the signed economic agreements between the two. Whoever violates their conditions should be held responsible before the international community.”

She added, “[Abbas'] speech included many strict decisions that will be implemented on the ground, such as ending the economic agreements signed between [the PA] and Israel in accordance with the Paris Protocol, backed by the international community, which always rejects the wrongful and irresponsible Israeli policies toward the Palestinian economy.”

Odeh further explained, “The PA is capable of following through with its threats to end the economic cooperation with Israel and make such a decision because it is not obliged to maintain it should the Israeli side violate it.”

During his speech in New York on Sept. 27 before the UN, Abbas announced that he would abide by the Palestinian Central Council’s decisions that had been frozen for months due to Israeli intransigence. These decisions, which the Arab League voiced their support for in its summit held in Sharm el-Sheikh on March 12, called for reconsidering the security and economic relations determined by the Paris Protocol in April 1994 regarding procedures and systems that govern the West Bank and Gaza’s economic relations with Israel during the transitional period.

Naji Sharab, a political analyst and professor of political science at Al-Azhar University in Gaza, told Al-Monitor, “The decisions mentioned in [the president's] speech require strength and the ability to end the economic cooperation and agreements, while finding an alternative, should the economic commitment end between both parties. This is not possible now in light of the major challenges the PA is facing, most importantly the Palestinian division, the economy’s fragility and the Arab and international community’s [lack of involvement] in the Palestinian cause.”

Sharab pointed out that it was impossible for the PA to resort to decisions that cut [economic] ties with Israel since the Palestinian economy completely overlaps with the Israeli economy. He also noted that such decisions require a precise vision, and all their dimensions and repercussions should be thoroughly studied to avoid total failure or a collapse in the Palestinian economic system.

Economist and lecturer at Birzeit University Nasr Abdul Karim noted in his Oct. 3 statements to Al-Iqtisadi that should the leadership decide to end the agreements, the changes on the economic level would not be fundamental and would not directly affect the citizens’ lives.

“The relations between Palestine and Israel were never governed by the agreements signed between the two, because Israel is rarely bound by anything,” Abdul Karim said, adding that despite all this, the government should consider the repercussions of such a move and properly prepare for it so it would not be an impulsive decision with unforeseen consequences for the Palestinian people.

Mohammed Abu Giab, editor-in-chief of Al-Eqtisadiah newspaper in Gaza, told Al-Monitor that Abbas' “speech shed light on the dangers of an absence of international funding for the PA, which [Abbas] succeeded in preventing. When it comes to the president’s and the PA’s ability to end the economic commitment and cancel the Paris Protocol with the Israeli side, it would be hard — or rather, impossible — since Israel controls the PA’s fate and currently controls the commercial crossings.”

Abu Giab noted that should the economic agreements end, the PA would be the biggest loser, since the great profits that Israel makes from its trade with the West Bank and the Gaza Strip are nothing compared to the support provided by the United States to its strategic ally. In addition, Israel’s international investments in technology alone are estimated at $6 billion per year, according to Abu Giab.

Israel had rejected the PA’s demand to review the Paris Protocol, a profitable project for Israel thanks to which the Israeli Ministry of War makes $300 million per year through clearance revenues (taxes on Palestinian products going through the Israeli crossings). It also produces its weapons and gains power through these clearance bills, which Palestinian traders and businessmen typically burn to avoid paying taxes.