The Palestinian Authority's announced goal of disengaging from Israel appears to be dismissive of the geo-political environment in which it is operating and the devastating consequences such a move will have for Palestinians on the West Bank and in Gaza. 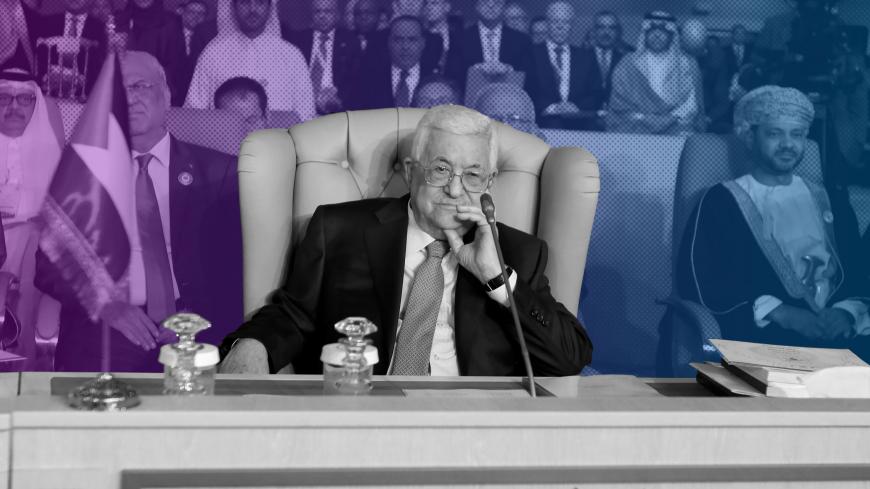 The Palestinian government “will work on gradually disengaging from Israel,” Prime Minister Mohammed Shtayyeh asserted May 20 in response to the US announcement of an economic conference to be held in Bahrain as part of President Donald Trump’s “deal of the century.” Palestinian businessmen were among those invited to attend the conference.

Shtayyeh also said that the Palestinian Authority (PA) had decided, as its first step toward disengagement, to freeze issuing referrals to Palestinians seeking medical care in Israel. The second step will be the launch of a program to encourage local production in manufacturing and agriculture to halt reliance on importing products through and from Israel.

A source in Israel’s Civil Administration who spoke with Al-Monitor on the condition of anonymity, confirmed that the Palestinian Health Ministry has almost completely ceased issuing vouchers to Palestinian patients to cover life-saving medical treatment in Israeli hospitals. “This is a game of false pride and honor,” the source said. “They are endangering the lives of the patients, mainly children and babies. Their main point is to prove to Israel and the Americans that the PA doesn't need them anymore.”

The PA does not have many alternatives to the treatments provided by Israel for cancer patients or people suffering from genetic diseases, a relatively prevalent condition among local Palestinians due to marriage among close relatives. Palestinian patients who cannot be treated in the Makassed Islamic Charitable Society Hospital in East Jerusalem are sent to hospitals in Jordan, while patients in Gaza are referred to hospitals in Cairo. For cancer patients, one big problem is that the treatments provided by these hospitals are inferior to those provided by Israeli hospitals specializing in oncological diseases. In addition, there are also logistical difficulties in finding donors for bone marrow transplants for patients suffering from genetic diseases or cancer.

Until recently, patients who needed such transplants, mainly children, were treated in Israeli hospitals with lots of experience in treating their illnesses. Due to the need to pinpoint potential bone marrow donors, the PA and Israeli hospitals established protocols for obtaining blood samples from close relatives of patients in Gaza and the West Bank. Hundreds, if not thousands, of Palestinian lives have been saved thanks to these treatments, after which the recovered patients returned home. The PA, trying to prove that it can manage without Israeli help, has come to the probably unwise decision to sever this connection.

The idea of Palestinian disengagement was not born when the Americans announced the “economic workshop” in Bahrain, but dates back to February 2018, after Trump made known his intention to recognize Jerusalem as Israel’s capital and transfer the US Embassy there. At that time, President Mahmoud Abbas issued a directive to the PLO’s Executive Committee to prepare a plan to disengage from Israel.

Since then, and with the expectation of the Trump administration releasing a peace plan, PA senior officials have been doing everything they can to deepen the crisis with Israel and the Americans. Thus, the Palestinian businessmen invited to the economic conference in Bahrain were warned by the PA not to attend. If they dare to participate, they were told, they may well be accused after the fact of “colluding with hostile forces.”

The Palestinian American millionaire Bashar al-Masri, co-founder of the city of Rawabi, near Ramallah, confirmed that he had been invited to the conference, but had declined the invitation. (Masri’s uncle is Munib al-Masri, who is also a millionaire.) Masri explained diplomatically that the upcoming Bahrain conference is “outside the Palestinian consensus.” On the other hand, it has been reported that the Palestinian businessman Ashraf Jabari had accepted his invitation.

Earlier this month, Qatar offered Abbas a grant of $300 million. The Trump administration has recruited Qatar, Bahrain and other wealthy Gulf states to provide financial backing for the peace plan it will unfurl next month, at the end of Ramadan. The commitment of the Gulf states to the United States at this point in time is significant for a variety of interests and considerations. Given this, Abbas may well discover that his categorical refusal to participate in the conference — and the threats that have caused powerful Palestinian businessmen to back out of it — represents a huge mistake.

Abbas has almost no economic alternatives beyond Saudi Arabia and the UAE, and they are acting in their own interest to maintain good relations with the United States. In other words: The Saudis and the Gulf states will not lift a finger to save Abbas from the dangerous corner that he and other Palestinian officials have painted themselves into.

According to an Israeli security source, PA officials lack an organized plan with clear goals. Committees and more committees are busy preparing position papers and action plans based on PA governmental assistance to businessmen on the West Bank and investment by Palestinian businessmen from Europe and the United States. All these plans, the source said, ignore one important fact: The territory in which the PA is operating is a confined enclave between Israel and Jordan, exactly like Gaza is an enclave between Egypt and Israel. There’s one more thing: Palestinian businessmen, like businessmen everywhere, are not rushing to endanger their fortunes.