Palestinian Prime Minister Mohammad Shtayyeh and his Cabinet are opposed to a Gaza Strip hospital proposed by Israel and the United States, but may not have much of a say in the matter. 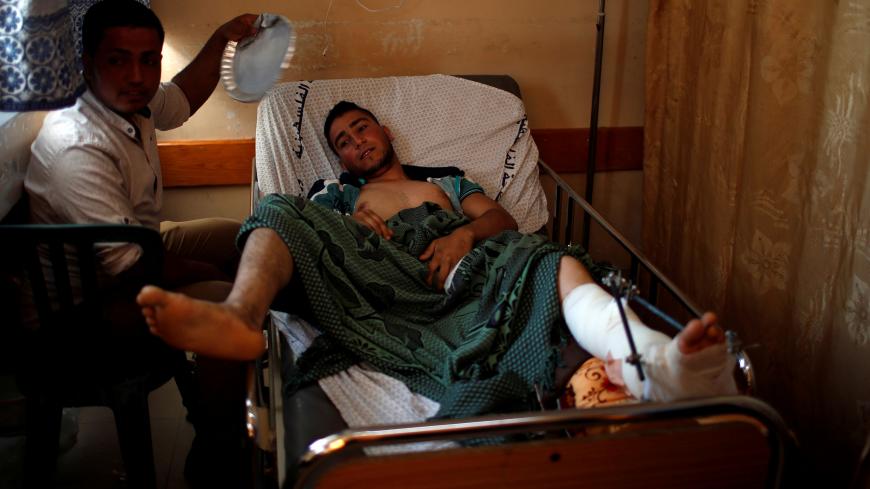 A man cools off an injured Palestinian as he lies on a bed at a hospital, Gaza City, Gaza, May 15, 2018. - REUTERS/Mohammed Salem

GAZA CITY, Gaza Strip — The Palestinian government in the West Bank is rejecting plans for a new field hospital in the Gaza Strip — plans that it considers part of a US-Israeli conspiracy to thwart a Palestinian reconciliation.

The project, however, appears to be proceeding anyway. It is part of understandings reached in Egyptian-mediated talks between Israel and Palestinian factions in Gaza, mainly Hamas and the Islamic Jihad. An international medical and administrative team will run the large field hospital, which will include 16 wards and modern equipment. The hospital will have several departments for internal medicine and pediatrics, in addition to a maternity ward, but mostly it will focus on diagnosing patients with life-threatening diseases, mainly cancer. Surveying has begun on 10 acres of land near the Erez border crossing.

Giant tents and equipment are being moved to Gaza from a field hospital in Syria, where the facility has been operated by a US nongovernmental organization, according to a previous Al-Monitor story.

During its weekly session July 8, the Palestinian government said, “The hospital that Israel and the US are seeking to establish on the northern border of the Gaza Strip is part of ongoing attempts to separate the Gaza Strip and the West Bank under humanitarian pretexts."

Hamas responded to the Palestinian Authority (PA) in a press statement the same day, saying that criticizing the establishment of a hospital “reflects the attempts of the government of Palestinian Prime Minister Mohammad Shtayyeh to disrupt any solution to the health crisis that was created by the Israeli occupation and the reprisals by [PA] President Mahmoud Abbas against our people in Gaza.”

Shtayyeh said in a press conference whose transcript was published July 9 by the Palestine News Agency (Wafa) that no pertinent party had contacted the government about establishing the hospital.

“No one coordinated with us about the hospital intended to be funded by a US private institution and with Israeli approval on the northern border of the Gaza Strip. The government, however, is ready to sit and discuss the project,” Shtayyeh said.

Ibrahim Melhem, a spokesman for the Ramallah, West Bank-based government, told Al-Monitor, “We aren't objecting to the establishment of a hospital in Gaza, but we were looking forward to hearing from any of the organizations or parties willing to fund such projects to coordinate with the PA and the Ministry of Health, which normally would assume the management of this hospital should it be built and would recruit and pay staff."

He added, “There must be coordination with the PA. This is what we are demanding to provide a high-quality service to our people in the Gaza Strip. We welcome the efforts of any party willing to ease the suffering of our people, but through the official gate of the country — which is through the PA."

Still, the new hospital will be a significant improvement for patients, especially for many of the Gaza Strip's estimated 7,000 cancer patients.

According to data released Feb. 4 by the Gaza-based Al-Mezan Center for Human Rights, cancer patients in the Gaza Strip face a "lack of radiotherapy treatment, diagnostic equipment and [a] low capacity for health-care treatment," yet 38% of them had no access to facilities outside the area. The center specifically blamed Israeli restrictions for the deaths of 45 cancer patients in the Gaza Strip from 2016 to 2018.

Also, the PA has exacerbated the situation since then by deciding in March to stop referring Palestinian patients to Israeli hospitals, in response to Israel’s ongoing withholding of tax revenues.

"Shtayyeh's government is strange" for objecting to the hospital project, Hamas spokesman Hazem Qassem told Al-Monitor. "The new hospital will be serving the patients of the Gaza Strip," many of whom are barred from traveling.

He added, “The government ought to give the Gaza Strip its share of health services, instead of disrupting the projects there."

In addition to the hospital, the truce terms include construction of an industrial zone and a new electricity line — projects the PA and others also find objectionable.

Palestinian writer Samih Khalaf said in a Facebook post July 10 that establishing these projects aims to weaken the PA and maintain the status quo in Gaza.

“All the projects that are now being launched, whether the industrial zone project, or the reconstruction of infrastructure, which are part of the truce understandings, serve as an introduction to the economic solution set forth by the US, and to establish a political vision in Gaza and the rest of the West Bank,” Khalaf wrote. “The PA's rejection of the hospital project reflects its rejection of the entire truce understandings, even if they relate to humanitarian projects."

The PA looks at the truce understandings between Israel and Hamas as a circumvention of its authority as the official Palestinian representation.

“This is why the PA is against these understandings," Iyad al-Qara, a writer and political analyst, told Al-Monitor. "The PA’s position is strange and shows that it treats the Gaza Strip as a separate entity."

by Murielle KASPRZAK and Joseph SCHMID | AFP | May 26, 2022
END_OF_DOCUMENT_TOKEN_TO_BE_REPLACED