Trump’s Israeli-US deal is not a peace plan

Donald Trump's 'deal of the century' may have started out as a peace plan, but his administration's conflict with the Palestinian leadership turned it into a plan to give Israel the green light to annex one-third of the West Bank. 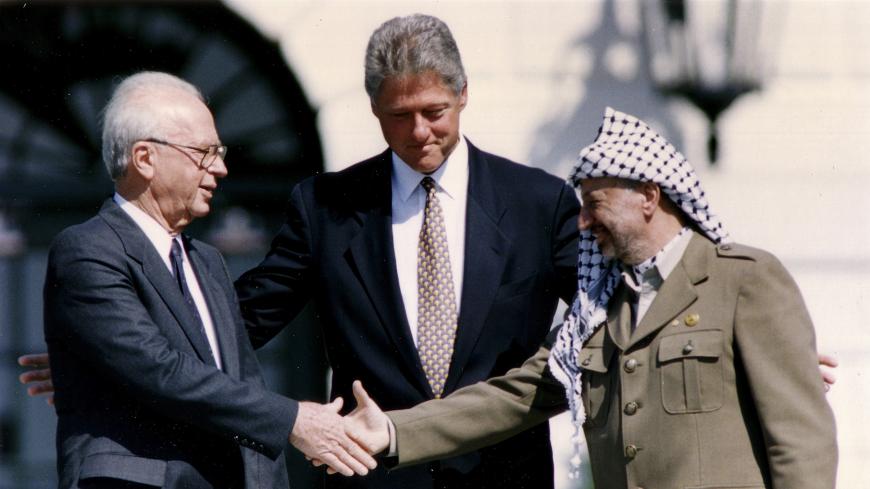 The Jan. 28 ceremony at the White House provided an opportunity for the American right to meet the Israeli right. They came together to listen to President Donald Trump and Prime Minister Benjamin Netanyahu talk about the “deal of the century,” which the former initiated and the latter adopted. It was all very strange. A host of commentaries tried to work out into which category, if any, the plan could be included in the library of efforts at peace in the Middle East.

What the deal effectively turned out to be was an American-Israeli agreement that presented the Palestinians with an established fact. Since no other Israeli-Palestinian peace plan has ever been presented as a fait accompli, the US Trump administration produced a booklet after three years of secrecy in an effort to paint their effort as a legitimate continuation in the peace process between Israel and the Palestinians. The authors claim to have gone far in adhering to the path, at least from their perspective, even complimenting the Oslo process, with special emphasis on vital security coordination between Israel and the Palestinians. A naive reader might mistakenly think that the deal was nothing more than an extension of Oslo, but they would be wrong.

The Oslo Accords were the first important agreement in the history of the two people’s relationship. It was reached between them alone and then concluded and signed between their nations and the world.

Until 1993, the Palestinians had never agreed to try to reach any agreement whatsoever with Israel, and the Israelis had never agreed to speak with the PLO, which was recognized by the Arab world and the international community as representing the Palestinian people. Unlike the peace treaty between Israel and Egypt (1979) and the peace agreement between Israel and Jordan (1994), the main problem in the Israelis' eyes was identifying an authorized partner with whom to reach an agreement. As it eventually turned out, all previous efforts by Israel to find other partners failed. Thus, it was left with a partner that made no effort to conceal its involvement in acts of terror and whose official map depicted Palestine on both banks of the Jordan River.

The importance of Oslo rested upon the Palestinians’ willingness to reach an interim agreement without deciding on the specific details, which were to be dealt with on a diplomatic horizon. This would be the plan’s biggest weakness. What evolved was a series of agreements that the two parties reached two years later, in 1995, involving more details. These achievements were overshadowed by the biggest advantage of all: the willingness of the two parties to bite their lips and shake hands after many long years of inflicting mutual suffering.

Now, almost 27 years later, a new agreement has been presented to the world, but this time it took place in the presence of the Israeli side only. There is no need to discuss who is at fault for the Palestinians' absence either during work on the agreement or at its presentation. The end result is a retreat from Oslo rather than an extension of those agreements.

As problematic as it may be, Israel’s partners are the Palestinians, led by the PLO. It is with them that Israel must reach a permanent agreement. Efforts made since the Oslo Accords to craft various options for a permanent solution prove that Israel indeed has a partner. Only those who do not want to reach an agreement cling to the notion that a partner does not exist. Any supposed agreement that is not reached between the parties themselves lacks finality. It creates frustration and bitterness on the side of the excluded party. Even under the best of circumstances, such a plan is little more than another interim agreement on the road to negotiations over a permanent settlement.

The absence of the Palestinian partner from Trump's plan is hardly a minor or procedural issue. It is the biggest difference between everything done in the last three decades and the so-called deal of the century. The previous economic component involved more than dangling vast sums of money from trees. It was an attempt, whether realistic or not, to let the Palestinians know that they would receive financial compensation in exchange for being prevented from resolving a significant part of their problems.

For several years now, people on the Israeli right have focused on and exploited the speech Prime Minister Yitzhak Rabin made to the Knesset on Oct. 5, 1995, a few days after he signed the interim Oslo agreement with PLO leader Yasser Arafat in Washington. Anyone reading the speech in the Knesset logs would have to make a concerted effort to get through it because of the incessant interruptions. One reads Rabin laying out Israel’s positions in the lead-up to negotiations on a permanent solution, which the two parties were slated to launch on May 4, 1996. Rabin never had a chance to participate in those negotiations because he was assassinated on Nov. 4, 1995. In presenting Israel’s opening positions, Rabin had cited a united Jerusalem under Israeli sovereignty, “statehood-minus” for the Palestinians and no return to the 1967 borders.

Since that speech, many things have changed. In negotiations on a permanent agreement, the discussions centered on a demilitarized Palestinian state, especially those held under former Prime Ministers Ehud Barak and Ehud Olmert but also Netanyahu’s talks with US Secretary of State John Kerry and the Clinton Parameters of 2000 as well as the unofficial Geneva Initiative. Despite this focus, the Palestinians never demanded the right to form their own army. As for Jerusalem, Israel was prepared to allow the Arab neighborhoods of East Jerusalem to be under Palestinian sovereignty. While talk about the boundary between the two states reiterated constantly and publicly that it would differ from the 1967 border, it was always added that the Palestinians would be compensated for any Israeli annexations on the West Bank with territory in Israel proper.

The underlying assumption of the Trump plan authors was that if Rabin were alive today, he would stick to his stated positions. In many ways, the legitimacy of their proposal relies on that idea. I disagree. It would not be a mistake to say that Rabin was quite sensitive to changes in circumstances. Given that all the prime ministers after him were prepared to accept the creation of a demilitarized Palestinian state, he likely would have concluded the same and dropped his idea of “statehood-minus,” which he never had a chance to explain. In any event, the idea seems very artificial that the launch of the Trump plan relied on the remarks by Rabin.

The closest thing to the current Trump plan is the Allon Plan, drafted by Israeli Deputy Prime Minister Yigal Allon a month after the 1967 war. At the time, Allon believed that the greatest threat to Israel’s security was from the east, which is why he placed so much importance on controlling the Jordan Valley. He suggested that a Palestinian state should be surrounded by sovereign Israeli territory on all sides. Since that time, however, Israel has signed a peace agreement with Jordan, whose vast territory constitutes Israel’s most important buffer zone, against Iraq and Iran. This made annexation of the Jordan Valley unnecessary. Even Netanyahu, in October 2010, was willing to “make due” with holding on to the territory for 40 years “only.” Seizing 30% of the territory of a future Palestinian state makes Trump's entire plan a unilateral move, with all the risks that this entails.

The Trump agreement is not a peace plan. It may have started out as one, but the conflict with the Palestinian leadership and the absence of Palestinians while preparing it turned it into a plan to give Israel the green light to annex one-third of the West Bank. American backing for this mistaken move is likely to be as stable as the backing of a “splintered reed” (2 Kings 18:21).