Egypt will start its negotiations with the United States next year for signing a bilateral free trade agreement as several international financial institutions praised its economic reform. 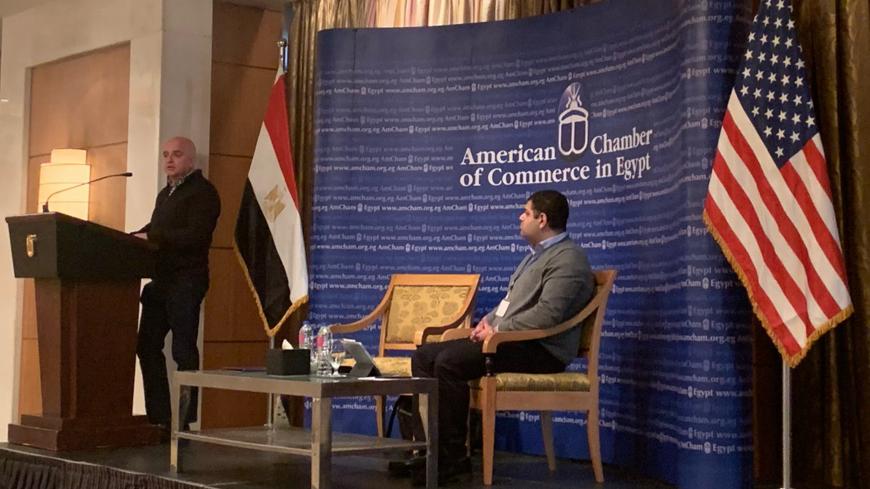 CAIRO — Comments by the top US diplomat in Cairo have renewed hopes among Egyptians for the potential of a long sought bilateral free trade agreement.

US Ambassador to Cairo Jonathan Cohen said Jan. 28 that negotiations at the official government level between Egypt and the United States are scheduled to begin next year on a bilateral free trade agreement.

A bilateral free trade agreement allows unrestricted import and export of goods free of customs duties between its signatories.

Cohen's announcement came on the sidelines of the conference of the American Chamber of Commerce in Egypt (AmCham Egypt).

He said that the discussions between the two countries on the free trade agreement are in the best interest of both sides, recalling the countries' strong strategic relations dating back more than 41 years.

Washington and Cairo have been engaged in talks on a free trade agreement — to varying degrees of intensity — for the better part of two decades. So far, however, a deal has remained elusive.

On Nov. 18, 2019, President of the Board of Governors of AmCham Egypt Sherif Kamel had stressed the need to take serious steps to sign the free trade agreement between Egypt and the United States. On the sidelines of his participation in the “US- Egypt Future Prosperity Forum,” he urged for moving quickly, noting that the time is favorable for such an agreement that would allow US exports to access African markets.

Al-Monitor spoke to Kamel about the free trade agreement. He indicated the volume of trade exchange between Egypt and the United States amounted to $5.2 billion in 2019, which entrenches the idea of ​​establishing a bilateral free trade area in the near future.

He affirmed that the signing of the free trade agreement could take place by 2021, after the end of the negotiation process between the two sides. He noted that in preparation for signing the agreement Egypt should produce all the evidence and special credentials to facilitate trade exchange and customs procedures, and ease bureaucratic complications.

Kamel explained that the free trade agreement would boost the relations between the two countries by allowing US products to reach the African continent in light of the existence of trade exchange agreements between Egypt and African countries.

He added that Egypt's distinctive strategic geographical location to US exports at the regional, African and Arab levels enhances the chances of success of the free trade agreement negotiations.

Abdel Khalek Farouk, an economist and director of the Nile Center for Economic and Strategic Studies, told Al-Monitor that the idea of ​​a free trade agreement between Egypt and the United States emerged more than three decades ago, but Egypt has yet to meet the US conditions for signing this agreement.

The QIZ agreement is a cooperation protocol signed between Egypt, the United States and Israel on Dec. 14, 2004. It allows duty-free access of Egyptian exports to the United States provided Israel supplies 11.7% of the materials used in the exported items. The Israeli content requirement was decreased to 10.5% in October 2007.

Farouk talked about several conditions set by the United States before signing the comprehensive free trade agreement, most notably strengthening the infrastructure in Egypt, establishing a number of airports, developing old airports and improving roads, railways and seaports to serve the economy, as well as facilitating customs-related procedures. To this date, Egypt has failed to fully meet these conditions.

He argued that the United States requires less bureaucracy in government work. “The United States asks for greater protection to the rules of intellectual property, which Egypt sees as a thorny issue,” he said. “Not much progress has been achieved in this respect, which might foil or obstruct negotiations.”

Mohamed Negm, an economic researcher at Al-Ahram Center for Political and Strategic Studies, expects Egypt’s negotiations with the United States on a bilateral free trade agreement to succeed. He said that Egypt is witnessing a significant economic improvement with high growth rates, which boosts the confidence of foreign countries and major world financial institutions in the Egyptian economy.

A number of international indicators show a noticeable improvement in the Egyptian economy and place Egypt on the right track, he told Al-Monitor. “Moody’s has upgraded Egypt's credit rating from B3 to B2. The World Bank praised in its report on Egypt the macro-economic and structural reforms that restored Egypt’s economic growth. All this heightens Egypt’s attractiveness of foreign investments, especially in light of major promising projects and major investment hubs, most notably the promising Egyptian construction and real estate sector and the energy sector,” Negm added.

Negm described Egypt as the US gateway to Africa with a population surpassing 1 billion. “The United States views Egypt as a major partner with whom it has major economic interests beneficial to both sides,” he said.

He noted that the great improvement witnessed by the Egyptian economy raises the chances of success of the negotiation process on the free trade agreement with the United States. “This is in light of the Egyptian ongoing economic reform process praised by many international institutions. The United States will surely tap into this improvement,” Negm concluded.