Egypt's free trade agreement with Turkey ends in 2020, but it is unclear whether it will be renewed in light of the political antipathy between the two countries' leaders. 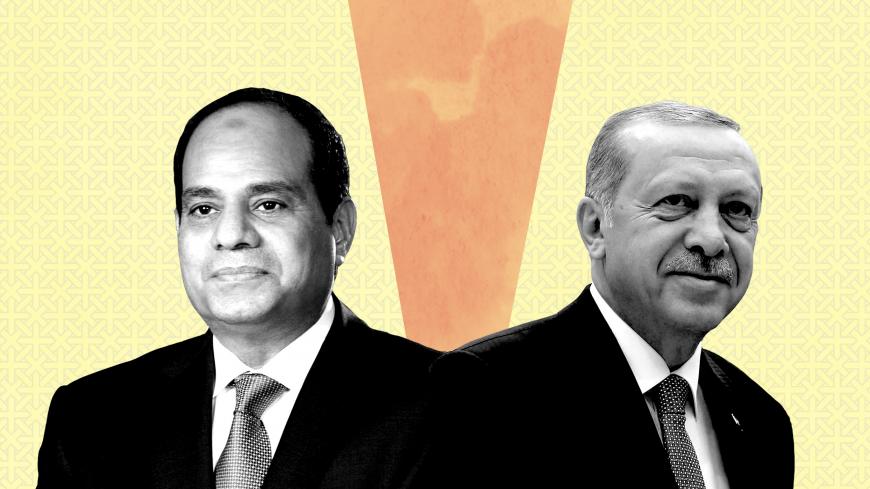 Egyptian President Abdel Fattah al-Sisi and Turkish President Recep Tayyip Erdogan have had a rocky relationship due to political differences over the toppling of Sisi's predecessor, Mohammed Morsi, and the Egyptian government's crackdown on the Muslim Brotherhood, whose members have been seeking refuge in Turkey. -

CAIRO — In many instances, international trade and politics go hand in hand, with strong political ties often leading to stable or thriving trade and exchange between countries. Such, however, is not the case when it comes to Egypt and Turkey, whose political relationship is icy at best but who are bound by a mutually beneficial free trade agreement (FTA), which is set to expire in 2020.

In 2018, Egypt and Turkey set a record for bilateral trade between them, with Turkish exports to Egypt totaling $3.05 billion, an increase of 29.4% compared to in 2017, and Egyptian exports to Turkey amounting to $2.19 billion, an increase of 9.68% for the same time period. Yet, the Egyptian-Turkish FTA, signed in December 2005 and entered into force on March 1, 2007, faces possible suspension amid the apathy prevailing between Ankara and Cairo.

Turkey under the Islamist leadership of President Recep Tayyip Erdogan has provided safe haven for Muslim Brotherhood leaders who fled Egypt after the overthrow of Egyptian President Mohammed Morsi in popular protests later found to have been supported by the Egyptian armed forces, the former home of Egypt's current president, Abdel Fattah al-Sisi. Erdogan has vehemently condemned Morsi's toppling as a coup d’etat against an elected president.

“The tense political relationship between the two countries is a result of a personal [grudge] by Erdogan against Sisi,” said Karam Saeid, a researcher in Turkish affairs at the Al-Ahram Center for Strategic Studies.

“The current political tensions will not persist,” Saeid told Al-Monitor. “Ankara will be open to any understanding with Cairo, along the lines of the reconciliations it has reached with Tel Aviv, Washington, Moscow and Tehran. Bilateral trade exchange and direct investments facilitate overcoming political obstacles to improve economic relations.”

Saeid further stated, “Both countries have been hit by economic crises that are pushing them toward renewing the FTA and avoiding a direct trade clash. Businessmen from both countries are lobbying for the FTA's renewal. The decline of the Turkish lira and the Egyptian pound after its flotation requires both sides to increase exports and reduce production costs to ensure the recovery of their respective economies.”

Saied asserted that Egypt's signing of the Qualified Industrial Zones (QIZ) agreement (2004) with Israel and the United States and its partnership agreements with the European Union (2004 and 2010) encouraged Turkish investment in the Egyptian market to benefit from the advantages offered by these agreements. The US-Israeli agreement gives Turkish products access to the US market without customs or quotas when manufactured in the QIZs with a certain percentage of Israeli components. This is especially important for Turkey's textile sector.

Citing another advantage, Saied remarked, “The nature of Turkish investments in Egypt, mainly in industrial and agricultural companies, has added to the Egyptian domestic product and created about 60,000 job opportunities. This points to the mutual need to renew the FTA.”

Bashir Abdel Fattah, another researcher at the Ahram Center for Strategic Studies, told Al-Monitor, “The issue of renewing or freezing the FTA is linked to several political indicators, most notably the survival of Erdogan and the AKP [Justice and Development Party] in power. Turkey has benefited from the FTA more than Egypt has, as the trade balance remains in Turkey’s favor. Ankara also has export advantages over Cairo. Turkey supports its exporters by offering them tax and customs exemptions, and its economy is more diversified, including advanced industries, agriculture, tourism and services, such as sea and air shipping.”

Abdel Fattah also said that politics prevails over economics in Arab countries, so politics must be factored into the chances for the FTA's survival.

At the end of 2018, the Egyptian Federation of Investors Associations, headed by Mohamed Farid Khamis, had called for abolishing the FTA. Khamis said in a statement that the FTA allows the entry of Turkish end products into Egypt without customs duties, raising the possibility of the dumping of Turkish products on the Egyptian market in light of the lira's decline.

Ahmad Shahieh, head of the importers division at the Cairo Chamber of Commerce (CCC), asserted to Al-Monitor, “Those demanding the cancellation of the FTA have a monopoly over certain commodities in Egypt that they put on the market at high prices, and they do not want any competition for their products.” To bolster his view, Shahieh noted, “The Egyptian pound after its floatation fell against the dollar at a rate higher than the decline of the Turkish lira against the dollar.”

Mohsen al-Tajouri, deputy head of the CCC importers' division, said, “The Turkish market is a promising market that offers high-quality products to Egypt at a cost lower than its European and American counterparts. The drop in the lira's value against the US dollar was beyond Turkey’s control. This means it did not exhibit any kind of intentionally dishonest practice in implementing the FTA.”

Tajouri confirmed that the CCC importers division strongly supports continuation of the FTA and calls for a breakthrough in the political crisis between the two countries. It is not clear whether the parties, if leaning toward maintaining the FTA, will choose to negotiate new terms or simply extend the current agreement.

Hassan Nafaa, a professor of political science at the Faculty of Economics and Political Science at Cairo University, asserted to Al-Monitor, “If there were any intention to end the FTA, it would have been canceled at the height of the political crisis between the two sides within the scope of political bickering, not now, seven years after its signing.”

Basset Fahmi, a member of the Economic Affairs Committee in parliament, told Al-Monitor, “The continuation of the implementation of the FTA is necessary. In 2018, Turkey was the second [largest] importer of Egyptian goods worldwide, after Italy.”

The parliamentarian also remarked, “Many European countries believe that it is essential to invest in Africa to prevent illegal migration to Europe and also to combat terrorism. Egypt has a good chance to attract such investments through its particular infrastructure, including roads, electricity, special economic zones, and encouraging new laws. Egypt’s exports to Turkey and others will improve during the coming period in light of the elimination of bureaucracy, facilitation of procedures for the incorporation of new companies, the privileges given to investors and the modern road infrastructure. This makes it imperative to keep FTA alive between the two countries.”