With the Turkish lira hitting a new low against the dollar and Jordan freezing its free trade agreement with Ankara, will Egypt take revenge on Turkey by imposing duties on Turkish imports? 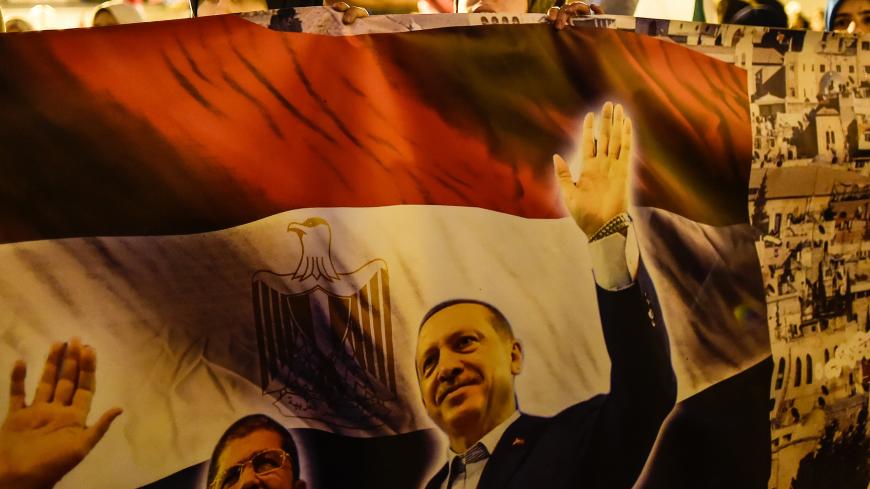 CAIRO — The economic crisis looming over Turkey hit a high point in May with the Turkish lira losing around 20% of its value, reaching 4.25 to the dollar. Egyptian, Arab and regional media coverage has focused on its impact on free trade agreements between Turkey and some Arab countries, mainly Egypt.

Tensions soared between Egypt and Turkey in 2013, after Egypt's armed forces ousted Egyptian President Mohammed Morsi and his Muslim Brotherhood-dominated government. Turkish President Recep Tayyip Erdogan saw the toppling of Morsi as a military coup and hosted several Brotherhood leaders who were accused by Egypt of planning and financing terrorist acts there.

Jordan froze its free trade agreement with Turkey on May 28. In its June 4 article “Abolition of Turkish-Arab agreements: Financial crisis or political motive,” news site Arabi21 discussed the repercussions of Jordan’s move on Turkey’s economy and the future of trade deals between Turkey and Saudi Arabia, Tunisia, Sudan, Qatar and Egypt.

The current situation has spurred speculation of plans to harm Egypt's economy. In a May 26 article, Youm7 journalist Dandrawi Al-Hawari warned of a plan by leaders of the Muslim Brotherhood who fled from Egypt to Turkey to protect the Turkish economy in support of Erdogan in the presidential elections slated for June 24. Under this plan, he wrote, these leaders will flood the Egyptian market with Turkish products through importation companies they own in Egypt, creating a huge surplus in dollars and bringing down its value against the Turkish lira. Hawari warned that massive importation by Egypt of Turkish products will harm the Egyptian economy.

It's true that a large number of Muslim Brotherhood leaders in Egypt, including many businessmen and owners of importation companies, fled to Turkey in the wake of Morsi’s fall.

On May 29, Maysa Atwa, a member of Egypt’s Parliamentary Manpower Committee, along with other parliamentarians submitted a request for information from the Ministry of Finance about measures to prevent Turkish products from flooding the Egyptian market.

“The decline in the Turkish lira's value against the US dollar is due to a drop in dollar liquidity in the Turkish market,” Atwa told Al-Monitor. “Leaders and members of the Muslim Brotherhood repeated in numerous online posts about the Turkish crisis that they will wage a sacred struggle to help Turkey get more dollar liquidity from Arab countries, especially Egypt, by flooding the Arab markets with Turkish products. This will surely harm Egypt’s economy.”

She continued, “Turkey can exploit investments in Egypt by the Muslim Brotherhood, Turks and Syrians who support Erdogan to flood the Egyptian market with Turkish goods so as to obtain more hard currency. Turkish products are imported from Turkey in dollars and sold in Egypt in pounds, raising concerns of wasting hard currency.”

Atwa added, “The government must take steps to thwart this scheme. High anti-dumping fees should be applied on the importation of Turkish products in tandem with tightened state supervision over markets. Turkey’s supporters in Egypt could import Turkish goods that are not needed in the Egyptian market to suck the dollars out of Egypt and Arab countries and inject them into Turkey.”

The Egyptian Chamber of Engineering Industries at the Federation of Egyptian Industries called on May 27 for raising quality requirements for Turkish products entering Egypt. Mohamed Bodi, the chamber's deputy chairman, told Al-Monitor, “The rise in the foreign exchange rate, as in the case of Turkey, increases the inflation rate and prices of raw materials for most industries. Therefore, Turkey will see itself forced to compromise the quality of its products in order to maintain price stability. Also, flooding Egyptian markets with Turkish products at lower prices than Egyptian prices may deal a heavy blow to the Egyptian industry even if the competing Egyptian industries are of better quality.”

Omar Muhanna, the chairman of the board of directors of the Egyptian Center for Economic Studies, commented that calls for duties and higher quality standards for Turkish imports violates the free trade agreement between Egypt and Turkey. Muhanna noted that duties, if used, should be imposed for limited periods. He pointed out that Turkey did not impose such duties on Egyptian imports when the value of the Egyptian pound plummeted in 2015 and 2016 against the dollar.

He added, “Egypt has the right to apply quality standards, but it must apply them to imports from all countries without distinction or discrimination.”

Al-Monitor also spoke with Bahjat Hassan, the head of the electrical appliances division at the General Federation of Egyptian Chambers of Commerce. He asserted that before the Turkish economic crisis, the prices of Turkish products were competitive and of good quality. He argued, “Imposing anti-dumping duties on Turkish appliances would allow Egyptian manufacturers to monopolize the market and set their own prices, no matter how high. This would harm consumers, as happened when the Egyptian government imposed anti-dumping duties on iron and steel imports from Turkey in December 2017.”

Despite the controversy over precautionary measures, Yusri al-Azbawi, a researcher at the Al-Ahram Center for Political and Strategic Studies, told Al-Monitor he does not expect Egypt to exploit the Turkish economic crisis to get political revenge from Erdogan’s regime, explaining, “The Egyptian state keeps its economic interests separate from political differences in its relationship with Turkey. This is evidenced by the meetings between Egyptian Minister of Trade and Industry Tarek Kabil and Turkish investors as well as the repeated calls by the ministry to increase Turkish investments in Egypt.”