Egypt's stray dogs are sometimes protected by residents and often shunned by the state and clerics. 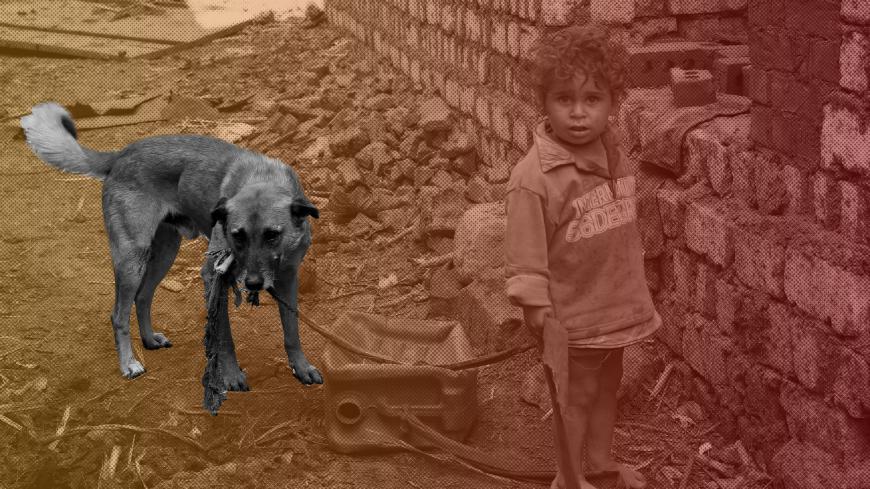 An Egyptian girl plays with her dog in the province of Fayoum, Egypt, Feb. 19, 2019. - REUTERS/Hayam Adel

India’s leader Mahatma Gandhi famously said that the greatness of a nation can be judged by the way its animals are treated — a statement that could make Egypt very difficult to judge, with dueling campaigns on whether to help or kill stray dogs.

On Jan. 15, Iman Hassan, an animal rights activist who advocates for stray dogs, posted on her Facebook account the story of a man in Heliopolis who had built a wooden shelter to protect stray dogs from the cold.

The man’s name was not revealed in the post, but Hassan explained in detail how this compassionate young man had bought the wooden dog house from an elderly man living in the same street and then put it in a safe place away from pedestrians and cars. Other young people living in the area help by providing food and water for the animals in this makeshift shelter. Then, one of the stray dogs gave birth to seven puppies.

Hassan said that the wooden shelter had gradually become a full neighborhood initiative, with some youths cleaning the dog house daily and others providing food. Even residents who don't particularly love dogs respect the initiative and are kind to the dogs who stay there. She has urged this citizen initiative to spread to other parts of the country.

But not everyone has been happy with the initiative. A resident who lives close to the dog house told Al-Monitor that the area attracts more stray dogs because of the food available there.

He called on the Ministry of Agriculture to intervene against this initiative in order to protect the residents from the increasing number of stray dogs.

An informed source at the Ministry of Agriculture told Al-Monitor on condition of anonymity that there have been no official complaints regarding the shelter. “The ministry will not take action unless someone makes an official complaint,” he said.

He added that some of the animal-friendly measures taken by locals may unwittingly lead to negative consequences, such as an increase in the number of stray dogs in a particular location. “If there are too many stray animals in a single area and the residents feel threatened, the ministry has to act. In some cases it becomes impossible to reduce their numbers except by using poison or guns to kill them,” he said.

In October 2018, the Slaughterhouse and Public Health Department of the ministry's Veterinary Services Authority launched a nationwide plan to get rid of stray dogs by poisoning them.

Shortly after the plan was announced, Egyptian parliamentarian Margaret Azer suggested exporting dog meat to East Asia. She said, “This is a more humane way of dealing with the overpopulation of dogs [than the current solutions that include mass shootings and castration]." She added that the benefits of this plan would be two-fold: reducing the likelihood of stray dogs attacking people on the street and providing an additional source of revenue to the Egyptian economy.

“We could take the stray dogs to a farm where they would be given a balanced diet and then slaughtered and exported,” Azer was quoted by the local press as saying. “After being properly fed, a dog could be exported for 5 pounds [$0.32] each.” Her proposal caused a reaction from public figures, including from Egyptian soccer star Mohamed Salah. It was eventually shelved.

Hassan al-Jaweeni, director of the Slaughterhouse and Public Health Department, told Al-Monitor that Law No. 53 of 1966 regarding the competences of the Ministry of Agriculture specified cases of removing stray dogs — and domestic dogs that do not have leashes — from the streets and other public spaces if there is a risk to the public.

Jaweeni said that both the officials in the Ministry of Agriculture and the public agree that stray dogs pose a threat on the streets. He said that more than 1.7 million dog attack complaints had been registered in 2014-18, with 278 incidents ending in death.

He pointed out that the Ministry of Agriculture obtained from the Egyptian House of Fatwas an official fatwa in November 2007 authorizing the killing of stray dogs if they have harmed people, “including scaring or barking at them.” The fatwa stipulated that killing the dog or dogs — as opposed to taking them to a shelter — had to be the only available option.

Al-Azhar Fatwa Committee has adopted a softer tone with stray dogs compared to the House of Fatwas. The committee issued a fatwa on Sept. 20, 2019, stating that the basic principle is "charity for animals," and the priority in dealing with stray dogs should be to collect them and send them to dog shelters. But it added that if a dog had become a threat to humans and killing it was the only option to stop it, this was allowed.

Dog lovers complain that the fatwas itself — particularly those that say dogs are unclean and not welcome in a Muslim home — have a negative impact on the way Egyptians treat dogs. Conservative people’s attitude to dogs was tested when Sufi singer Mahmoud al-Tohamy, chairman of the board of directors of the Religious Chanters’ Syndicate and a graduate of Al-Azhar University, posted on Facebook a photo of himself while caressing his son's dog.

The Dec. 19 post simply said, “Whoever tells you the dog is impure, tell him that God never created impure creatures.”

The photo immediately caused anger with the public, who considered that he was going against Sharia (Islamic law); several fatwas of Al-Azhar and the House of Fatwas over the years had said that dogs are impure.

Tohamy responded by saying that various scholars had challenged the idea of the impurity of dogs, including Imam Malik Ibn Anas, a prominent Islamic scholar (711-795).

Muslim doctrines are divided on whether dogs are clean or not. The Maliki sect considers the dogs clean, whereas the Shafi'i and Hanbali sects believe that dogs are unclean and have no place in a home where there are daily prayers. According to Al-Azhar — which follows the Hanafi school of thought — the dog is also impure and forbidden in the homes of Muslims except for an important reason such as guarding.

"The fatwas of religious institutions that the dog is impure provide a basis for many citizens who think they are entitled to attack dogs on the streets,” he told Al-Monitor. “Dogs normally do not snap or growl and threaten people unless they are threatened themselves, and only a small percentage of dogs on the streets have rabies or other diseases,”

Youssef said a cultural change is necessary — both in the religious interpretation of the "purity” of dogs and in the role they play in urban life. “The killing of stray dogs since 2018 has led to the emergence of various dangerous animals in the outskirts of some of the cities near the deserts,” he said.

In April 2019, media outlets and social media activists shared photos of hyenas near a tourist resort in Taba in the south Sinai Peninsula.

Many activists attributed the hyenas’ emergence to the expansion of campaigns to get rid of stray dogs in the cities of Taba, Dahab and Nuweiba, as these dogs play a prominent role in scaring away the hyenas.