The torture and killing of animals by residents and security forces are widespread in Egypt, but animal rights associations have insufficient funding to spread awareness about the importance of animals and how to deal with them. 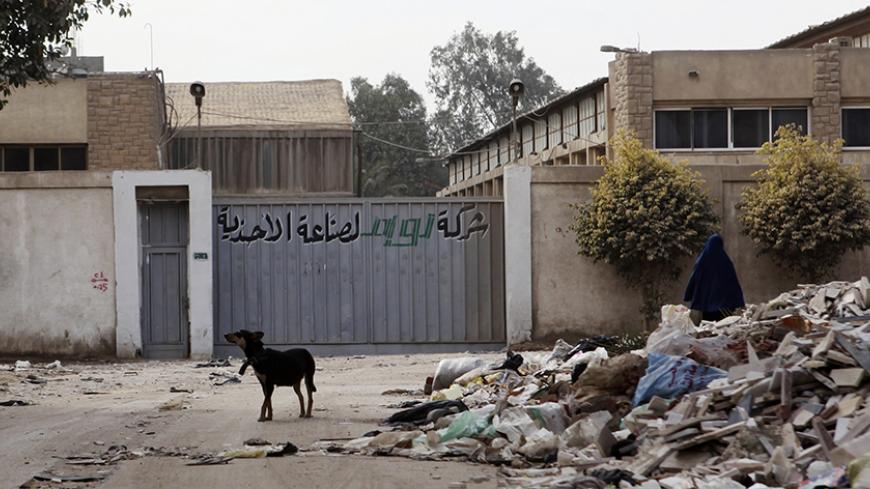 A dog walks outside a factory, which was closed down, on the outskirts of Cairo, Feb. 26, 2013. - REUTERS/Asmaa Waguih

Several episodes of violence against animals, especially street dogs, has pushed the Egyptian media to highlight some of these incidents and shine a light on animal rights organizations. The first publicized incident was in December and involved a female dog named Heart, who was rescued after being tortured and burned by a caustic substance thrown on her. The second incident was the beating and slaughter of Max, known in the media as “Dog al-Ahram.”

A video showing the torture and death of Max spread through social networking sites in February. After presentation of the video and reports by citizens, a Shubra al-Kheima court sentenced the dog’s killers to three years in prison March 11. In an incident this month, someone killed six puppies and their mother with a stick embedded with nails.

Despite the media turning their attention to animal rights issues, Mona Khalil, head of the Egyptian Society for Mercy to Animals, told Al-Monitor that the atmosphere in Egypt does not generate support for animal associations’ activities. Abdel Rahman Youssef, head of Cairo Animals Rescue Team, agreed with this view, and told Al-Monitor that the judicial ruling against Max’ killers does not mean that the government has changed its policies on animal rights. He thinks it was done simply to soothe opinions on social networks. Youssef said that cruelty toward animals is practiced by the police as well as the General Authority for Veterinary Services, which is under the Ministry of Agriculture.

On March 23, newspapers reported that a mad dog, a street dog thought to be rabid, had bitten 16 residents in the al-Nakhl neighborhood in the city of al-Senbellawein, in Dakahlia governorate. An al-Nakhl resident who requested anonymity reported to Al-Monitor via Facebook that residents were so terrified by dogs that they had asked for help from the police, who then shot and killed some 11 dogs.

Khalil said that biting alone is insufficient reason to kill dogs, because biting is a dog’s way of defending itself as well as its puppies. It does not necessarily mean they have rabies. Dogs that bite, she further stated, should be placed under observation for a period of two to three months to determine whether they have the disease.

"According to my experience with animals in Egypt, rabies is a rare disease," Youssef said. "Not all of street animals killed by the government or citizens have it,” he added.

“The fear of street animals, especially dogs, displays ignorance and lack of information among citizens about the importance of animals and how to deal with them,” Youssef said. “Street dogs only attack after smelling a person’s fear and adrenalin, which makes dogs think the person might hurt them. They are of great importance to the ecosystem. Since most modern urban communities are close to the desert, the presence of dogs protects [the people] from foxes and wolves. Street cats kill mice, which can carry plague, as well as reptiles and insects, thus reducing their spread in cities.” Few people mistreat cats, believing they are not harmful or prone to biting.

It is undeniable that some citizens, perhaps a large percentage of them, have wrong or bad impressions about street animals and are unaware of the role that they play in their community. Such ignorance can push some to them to hurt these animals or ask authorities to dispose of them. Many citizens also do not know that animal rights organizations exist in Egypt. The al-Nakhl resident acknowledged not being aware of such groups, adding, “This is why residents asked for the police’s help.”

“Indeed, many citizens in the countryside or in Upper Egypt know nothing about animal rights organizations,” said Youssef. “They cannot reach the citizens there to spread awareness due to lack of funding.” Youssef and Khalil's organizations provide treatment and care for ailing street animals or those, like Heart, who have been hurt or tortured.

Khalil criticized the performance of successive Egyptian governments on the issue of street animals. She said that the state has spent millions of dollars importing poisons to limit their population growth, but that the approach has failed. She said a better approach would be to vaccinate these animals to protect them from rabies in addition to sterilizing them to prevent their reproducing. She also advocates creating centers specialized in the care and vaccination of street animals.

Youssef said that rabies vaccinations are produced locally, so compared with the cost of importing poisons to kill supposedly rabid dogs, the government could save money by vaccinating them instead. He also contends that sterilizations could be performed by veterinarians from the General Authority for Veterinary Services, whose work has became limited to putting poison in food for street animals. Khalil believes that dispensing vaccinations can be part of the training for college students specializing in veterinary medicine.

Youssef said that the poisons used, including the internationally banned strychnine, which he accused the government of spending $10 million a year to secretly import, contaminate trees and agricultural products if they become airborne. The poisons also can kill children if they ingest them.

Hassan Shafeeq, deputy head of the General Authority for Veterinary Services, denied government use of strychnine. He also told Al-Monitor that the cost of imported poison does not exceed $10 million a year and that the dose used to poison an animal does not exceed half a gram. The cost of the poison, he said, ranges between 6 cents and $1 per animal dose. Shafeeq said, “Animals are poisoned only in regions where complaints of mad animals are received. Last year, the number of complaints reached 300,000.”

On population control, he said, “The sterilization operations do not only include the doctor’s fees, but also the cost of anesthetic, surgical sutures and antibiotics to help heal the wounds. Based on these fees, the total cost for the sterilization of one dog is about 250 Egyptian pounds [$46.50], a budget that the state cannot afford at the moment.”

Both Khalil and Youssef noted that animal care is expensive in terms of providing shelter, food and health care, and the lack of funding for animal rights associations prevents their being able to help alleviate related problems. They said their funding is mainly dependent on donations from members and others interested in animal issues. According to Khalil, animal rights organizations previously received support from international associations, but that has almost stopped entirely because of failures in cooperation with official authorities in the country.

“The failure was most obvious when the Society for the Protection of Animal Rights in Egypt signed a protocol of cooperation with the Cairo branch of the General Authority for Veterinary Services for training doctors from the authority on how to limit the spread of street dogs. The training focused on the Nasr City neighborhood, where there had been lots of complaints. During the training period, we were surprised that a doctor from the authority, who was being trained, poisoned dogs on the instructions of the authority,” Khalil explained.

On Jan. 19, the Fatwa Committee at Al-Azhar declared it acceptable to kill stray dogs that pose a threat to humans. Youssef said that the fatwa was vague in failing to specify the type of threat. Some people believe dogs are a threat when they simply bark in the streets. He also said the fatwa gives legitimacy to actions taken by government and some citizens in killing street dogs. Youssef believes the fatwa should have emphasized that specialists, not average citizens or security forces, should be tasked with determining the threat posed by animals.