An Egyptian engineer set up a rescue facility in Giza to care for Egypt's many homeless dogs and find them new homes, and his new one under construction in Alexandria will take in cats, too. 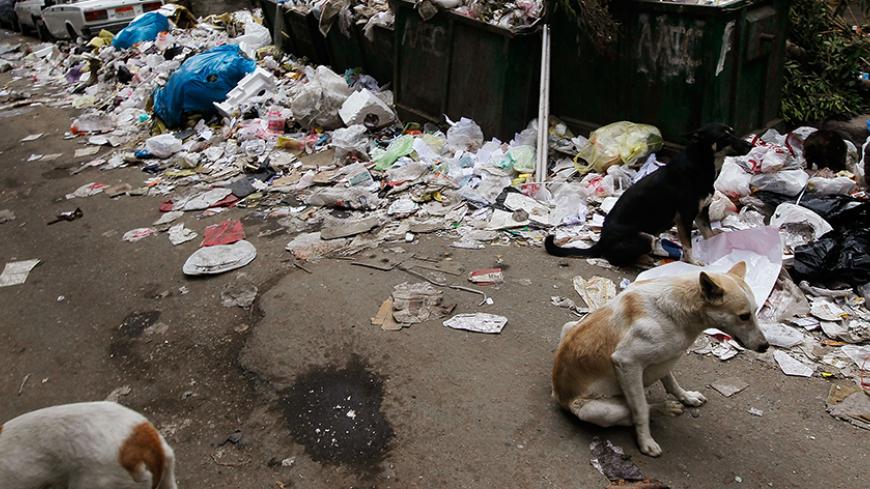 A snapshot of any Egyptian street will include numerous homeless animals that suffer from malnutrition, gruesome diseases and cruelty. Egyptian civil engineer Ahmed Al Shurbaji, who works as a contractor, decided not to turn his back on this misery and has dedicated himself to helping stray dogs and cats find safe homes.

Shurbaji's nonprofit organization in Giza, HOPE Egyptian Baladi Rescue & Rehabilitation, has taken in around 160 dogs and is working online to find them new homes.

Animal shelters worldwide are grappling with funding problems, and in a country plagued by economic turbulence, rescuing animals is an especially daunting task. Shurbaji nevertheless insists on doing as much as he can.

"I was raised among animals and I enjoyed watching them," Shurbaji told Al-Monitor. "Such an idea had never crossed my mind. But one day my cat was extremely sick, and I felt how these animals are weak and cannot verbally express and report their pain like humans. Since then, I became more interested in rescuing animals."

The brutal stabbing of a chained dog called Max that sparked public outrage in 2015 was one of the factors that motivated Shurbaji to establish his shelter in Giza Governorate. "I started to capture injured street animals in 2014 and keep them in a small facility. But as the number of these unfortunate animals grew rapidly, I decided to find a larger place for them. The HOPE shelter was founded in 2015," he said.

HOPE shelter offers the rescued dogs medical treatment and food. It has a new branch under construction in Alexandria's Burg El Arab. The Alexandria facility will host both homeless cats and dogs.

"What distinguishes our sanctuary is that we seek to spread the concept of rehoming strays through online adoption," Shurbaji said, adding that many of the organization's dogs have been adopted by lovely families in Europe and the United States. Asked how he feels about the distance, he said, "Surely I miss them, but I am happy that I helped them have a better life."

The foundation is notified of homeless dogs through social media groups. Shurbaji explained, "We do not walk streets searching for strays. Once someone reports that there is a homeless or severely injured animal, we send our dog catchers to bring them to the shelter. Some dogs easily come with the catchers since they're unafraid of humans. But around 90% of the rescued dogs need to be sedated."

At first, the injured animals were sent to external clinics for treatment. "Due to the organization's limited budget, I decided to have our own vets who can professionally treat the rescued dogs at a lower cost. But in critical cases, we resort to such clinics." Shurbaji said that the shelter's workers follow the animals' individual treatment plans until the dogs are well again.

Shurbaji described the shelter's daily routine, saying that morning is the time of cleaning. Since dogs, like other animals, have different personalities and behavior, they are divided into appropriate groups for socialization. "I find my real happiness in watching them playing and jumping in joy with their tails wagging," he said.

The grown dogs eat their meals at 5 p.m., but puppies need two meals a day. They get an extra first meal in the morning and eat again when the older dogs are fed.

The organization also works to spread awareness of animal rights. It recently launched a campaign to sterilize stray dogs in Cairo's Maadi district and plans to expand the operation to other suburbs.

"The culture of respecting animal rights does not exist in this country, where people are fighting tooth and nail to earn a living. One of the worst situations I have ever faced was when I headed to a certain place to save an injured homeless dog. But I found myself detained in the police station following a fight with some people who refused to let me take the dog. This situation is etched in my memory," Shurbaji recalled.

He said he's thought several times about closing his shelter, unable to bear the miserable conditions of animals in Egypt. "I got sick of the scenes of bleeding wounds and the poor animals that were shot or poisoned by the police. These animals are living in hell here. This shelter also adds to my financial burden. But I changed my mind and insisted on trying my utmost to save them."

Though this sanctuary has become essential to promoting animal rights in Egypt, funding issues and government negligence continue to hamper its work. "We mainly rely on donations. I pay out of my own pocket when the donations are not enough to cover the expenses of vaccinations, food and medications."

Shurbaji also condemned the government policies, including intensive campaigns to shoot and poison stray animals. "Officials justified these campaigns by saying that these dogs are rabid," he said, and noted that he and his team have met with the minister of agriculture and parliament members but have not seen any real results.

Now the animal lover is focusing on the organization's new branch in Alexandria and hopes to establish more branches nationwide. He is also planning to use ambulances to transfer injured animals, becoming the first shelter in Egypt to do so.

Asked for his final comments, Shurbaji implored, "Mothers should teach their children how to treat animals humanely. Promoting animal rights starts in the family. If strays bother you, do not throw garbage in streets and you will never find them. Please, have mercy on these creatures."