In Lebanon's ongoing economic collapse, hundreds of cats and dogs are thrown into the streets every month. 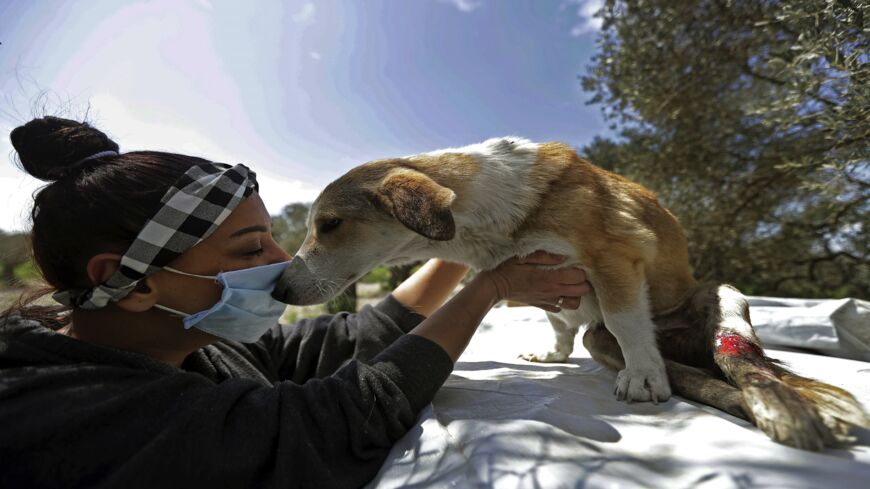 Zaynab Razzouk, head of the animal protection NGO Carma, plays with a paralyzed dog at the shelter in the area of Koura, north of the Lebanese capital, Beirut, on April 3, 2020. According to Razzouk, dogs and cats are getting dumped every day, and the NGO is flooded with messages from people asking if the shelter can take another unwanted pet. - JOSEPH EID/AFP via Getty Images

A large number of Lebanese animal rights activists who are taking to social media platforms to express their frustration say that Lebanon's cats and dogs "are not fine at all." The activists say that the situation "has become unbearable, and there is no way to rescue them except by deporting them from a country riddled with economic, political and humanitarian woes, through relevant international associations.”

Animal rights activist Ghina Nahfawi said, “Before the October 17 revolution in 2019, and before the Lebanese people started struggling with a turmoil of economic collapse, hunger and unemployment, animal rights were already suffering. There were many stray cats and dogs, and even the relevant municipalities did not play their role, unlike municipalities of developed countries. They did not castrate the males or spay the females to avoid reproduction, leading to a crisis in the streets and areas where these animals live. Most animals are hit by cars, tortured or suffer from malnutrition, food poisoning and contagious diseases.”

On the issue of killing stray animals, in 2017, members of the health detachment in the municipality of Ghobeiry south of Beirut killed stray dogs with poison on the pretext of people’s complaints and to preserve the safety of citizens.

“Killing animals in the streets is still common, and such incidents happen from time to time, especially with the increase in the number of pets thrown out of houses,” Nahfawi said.

We tried to communicate with officials from some municipalities that had previously taken dangerous measures against animals, but they all evaded answering, and some of them claimed they were busy with meetings or that they did not have new data. We also contacted the municipality of Tripoli (northern Lebanon). The mayor told Al-Manar channel months ago that he was forced to return to the traditional way of getting rid of dogs, but he apologized after people opposing his decision were vocal about their resentment, and he said he was waiting for other solutions.

“We do not have official figures of the number of pets thrown in the streets. Before 2019, it varied between 40,000 and 50,000 dogs. We would get one or two calls a month to report a case. In 2020, with the onset of COVID-19, we started receiving dozens of calls daily after hundreds abandoned their pets out of fear of the virus. The number multiplied in 2021, and now we receive around 20 calls reporting cases due to the declining economic situation and the rising costs of pet food or treatments,” said Roger Accaoui, vice president of Perpetual Animal Watch.

He asserted, “Associations cannot find radical solutions to this phenomenon, and they help rescue the largest number possible of pets and provide them with shelter. Priority is given to dogs that are most susceptible to abuse and killing in the streets.”

Article 12 of the Lebanese law states that “the Ministry of Agriculture shall set forth guidelines for stray population management, including the acceptable methods of reproductive control, capture, rabies observation, the reasonable period of time to allow for a reunion with the owner, and minimum standards for housing and disease control measures. Municipalities shall set forth a management plan for stray animals in accordance with the directives of the ministry and enforce it.”

Accaoui noted that “a project is underway between the association and the Lebanese municipalities, but it requires funding worth $1.6 million to cover the establishment of shelters and castration of all stray dogs. It would also involve building an emergency center to take in critical cases. In case it is implemented, it will solve the root cause of the problem. Municipalities have shown their readiness to cooperate, but they don’t have a specific budget. We are trying to fund the project from foreign donations.”

Article 12 also notes that municipalities must regulate the situation of stray dogs, which is the case across the world, whereby municipalities, in cooperation with the Ministry of Agriculture, would offer a piece of land designed to be an animal shelter. The ministry would then provide the needed vaccines with the help of veterinarians, and the animals are castrated so that they don’t reproduce.

Effectively, this law has not been implemented, according to activists, who asserted that some of them tried to contact the ministry to secure food for house dogs to prevent their owners from abandoning them. But the activists received no answer.

In an attempt to contact relevant figures in the Ministry of Agriculture, including the head of the animal resources department, to discuss solutions with them, the conclusive answer was, “The issue is not under my remit. It’s the minister’s business.”

Gynecologist and animal rights activist Dr. Dana Abu Hosn refused these pretexts: “The increasing unemployment, high prices and the continuous lack of special food are factors that contributed to the rising animal abandonment. Most of the foods are imported and priced in dollars. The prices actually did not increase, but the local currency against the dollar is changing weekly. One bag of dog food, which is enough for one month, costs around 400,000 Lebanese pounds (the equivalent of $22 or more, according to the black market rate and due to the instability of the currency), and minimum wage currently stands at $70 per month.”

Dr. Hosn, who runs a shelter in the Hammana area (eastern Lebanon) accommodating 550 dogs said, “Don’t throw your dogs out into the streets for any reason. There might be solutions to the food problem. You can mix animal food with some of your food, such as boiled vegetables with very small pieces of meat and chicken, but before adding salt and sugar. Then, add those to the animal food you have. On the one hand, the dog and cat eat healthy food, and on the other hand, you will save on buying a bag of food every month, and instead it lasts for three months.”

Securing food might be resolved using simple methods. But the big crisis is related to medical care for these animals, whether at home or in the streets. Most people who abandoned their animals did not do it because of the high cost of their food only, but because the animals got sick and they thought it best to leave them in the streets to face their fate alone.

Veterinary surgeon and head of the scientific committee of the Lebanese Syndicate Dr. Nedal Hassan talked about two categories of animal keepers. The first includes those who buy or raise little pets only for fun, only to abandon them and throw them away when they grow older. The second category is that of people who deprive themselves of many things just to protect their dogs or cats, and like us, they face difficulties — for instance, in finding the necessary vaccines, either because of their high price, which reaches 400,000 Lebanese pounds per dog or cat, or because of their lack of availability on the market.”

Dr. Hassan added, “In the past few days, at least 10 bichon dogs, which are small domestic dogs who do not adapt to living on the streets, arrived at our clinic. Most were run over by cars and were in critical condition, while others were pregnant. Some had swallowed pieces of plastic after mistaking them for food. These dogs used to live in luxurious homes and do not know how to behave in the streets. Cats were also shocked when moved from one environment to another and are unable to secure their food and might eat poisonous things, not to mention the run-over accidents they face.”

Operation costs “range between $40 to $100 or $150, depending on their type. Vaccines and male castration cost $25. Female spaying costs about $100. The most expensive operations require the attachment of metal rods or limbs for the surviving animal from an accident or run-over. It is currently difficult to secure metal rods, limbs and other medical surgical supplies for animals,” Dr. Hassan said.

According to the doctor, some clinics did not increase their prices and ended up deducting a large percentage of the profits just to stay open and afloat.

Lebanon is facing a critical juncture, and the same can be said about everything, including the clinics that lack medical material and the high import prices. Most citizens are no longer able to secure their own personal expenses, which makes it difficult for them to even think about resorting to vets. In fact, a large wave of migration of specialists from Lebanon to other countries has been ongoing.

“Other colleagues are now paying the costs of the operation in installments because animal keepers are unable to pay them in one lump sum. Some doctors and association owners contribute as much as possible to help save innocent animal lives, but fears and risks are only worsening," said Dr. Hassan.