A Palestinian citizen has launched the first welfare society in the Gaza Strip for stray dogs and cats, as there is no government funding or official organization for attending to these animals. 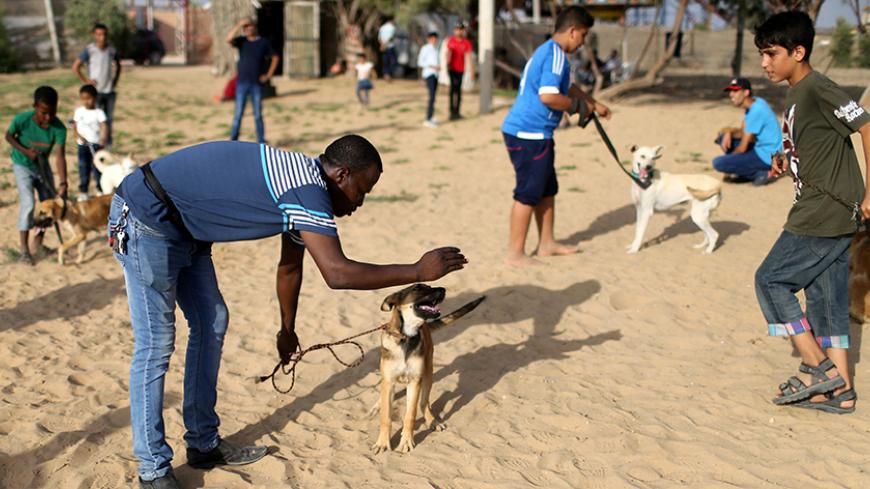 GAZA CITY, Gaza Strip — Every morning, Said al-Arr, a Gazan of Bedouin origin, roams the streets of the Gaza Strip to find stray cats and dogs and provide them with food and health care. He then takes the animals that need constant care to his own association, which specializes in the care of stray animals, a first of its kind in Gaza.

There are no official associations or nongovernmental organizations — local or international — dedicated to the care of stray animals in Gaza, as raising pets is not a popular hobby among citizens. Taking care of animals is costly, and Gazans can’t afford it in light of their harsh living and economic conditions.

Arr established his association, “Sulala Association for Animals Care,” in May in the town of al-Zahra in central Gaza. He told Al-Monitor, “The aim of this association is to protect stray animals from being run over in the streets or getting killed. We also offer care for injured animals and raise awareness among Gaza’s citizens about animal care.”

The Sulala building, which occupies a space of 2,500 square meters (27,000 square feet), includes a smaller building to provide veterinary care for the animals and an open area planted with trees where the animals are put in cages.

Arr has personal experience dealing with animals. As he was feeding a dog at his center, he said, “When I was a child, I loved to take care of animals because I considered them weak creatures that need care. In 2006, I had the opportunity to join training sessions in Russia that lasted nine consecutive months. The sessions [provided me] with basic knowledge about animal training, diagnosing and treating some diseases. This is how I gained my experience in the [animal] field.”

The association houses 65 dogs and four cats. About the low number of cats, Arr said, “People treat stray cats better than dogs, as there is a popular belief that killing or injuring a cat brings bad luck — dogs do not have this reputation.”

Arr opens the Sulala Association to the public to watch the cats and dogs being trained. Anyone can also adopt any animal found in the center on the condition that they provide the animal with care and protect it from abuse. Arr said, “About 25 citizens already adopted animals from the association. To ensure that these animals receive complete care, we formed a committee made up of workers from the association to visit those citizens and make sure the animals are taken good care of.”

Arr said 25 people, including four women, work as volunteers at the center.

Maram Abu Jabara, who regularly visits the Sulala Association to look at the animals, told Al-Monitor the association made her reconsider why she refused to own a pet at home.

Abu Jabara said Gazans are not familiar with animal associations, adding, “Citizens in Gaza consider that owning a pet at home is a luxury in light of the increasing poverty and unemployment rates and the deteriorating economic situation. This is why the establishment of the association was unexpected in Gaza.”

Data for the second quarter of 2016 published by the Palestinian Central Bureau of Statistics showed that unemployment rates in Gaza reached 41.7%, compared with 18.3% in the West Bank.

Abu Jabara said she has heard many people joke about the opening of this association that offers care and refuge for animals, while people in Gaza lack sufficient care and attention, they claimed. She said, “It is true that thousands of people were left homeless as a result of the 2014 Israeli war on Gaza, and many can’t travel outside the Gaza Strip for medical treatment because of the closing of the Rafah border crossing by Egypt. But all this should not stop us from treating stray animals in a more humane way.”

For his part, Arr also launched a Facebook page to show the public the work his association is doing and to encourage Gazans to follow suit. Some citizens have interacted with the page and posted pictures of stray animals they found in the streets, while others have asked to adopt animals that have completed their training at the center.

Since the launching of the Sulala Association, Arr has spent $20,000 of his own money for dog care, noting the association has yet to receive any government support or local and international donations. This lack of money led to the death of 15 severely ill dogs Arr had picked up from the streets.

Zakaria al-Kafarna, the director general of the Veterinary Department at the Ministry of Agriculture, said that the ongoing Israeli occupation of the Palestinian territories is one of the reasons behind the government's lack of support for animal welfare associations. He told Al-Monitor, “The Israeli occupation is in control of all sectors in Palestine, which prevents the successive Palestinian governments from providing security, food, shelter and work for people, let alone animals.”

Kafarna said his ministry may support private projects that breed animals for consumption, such as livestock, but "supporting projects for the care of cats and dogs is considered a luxury that we cannot afford because of the lack of resources."

Despite this sad reality, Arr hopes to develop his association to become a big natural reserve that includes more animals, such as rabbits and horses. The association would also include a veterinary clinic specializing in stray animal care, a center for breeding rare dogs and an animal food factory. But to achieve his dream, he hopes he will receive some assistance from world animal care associations.