Egypt’s State Council is currently looking into a lawsuit against the government’s killing of stray animals, which officials say is necessary to protect citizens. 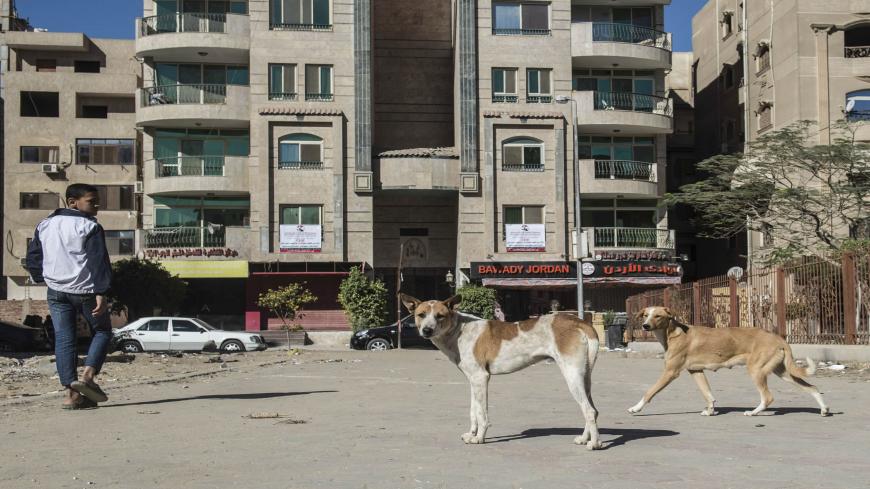 CAIRO — The Administrative Judicial Court of the Egyptian State Council is looking into a new lawsuit filed by lawyer Mostafa Shaaban and a group of animal welfare activists, demanding that the government stops randomly killing stray dogs and cats and bans their export to countries that allow their meat to be eaten.

The case was addressed to the president of the republic, the prime minister, the ministers of interior, foreign affairs, local development, investment and agriculture, and the chairman of the Board of Directors of the General Organization for Veterinary Services (GOVS).

Shaaban told Al-Monitor over the phone that the government agencies are conducting a systematic campaign to kill dogs and cats across Egypt in violation of the law, using brutal and immoral methods, most notably killing them with bullets or by inserting deadly toxins into food and feeding it to them. He said this is the reason for filing a lawsuit to force the government to stop this campaign.

He said that this government strategy disturbs the ecological balance as well, as these dogs and cats usually feed on snakes, mice and various rodents, which creates a natural environmental balance between these organisms.

Shaaban noted that some predators, such as wolves and mountain foxes, fear dogs, so their presence in the streets helps these animals from migrating to urban areas or new cities near the desert and mountainous areas, such as 6th of October City, Badr City and 10th of Ramadan City. The unjust killing of dogs is against the constitution on the one hand, and against nature and the environmental balance on the other, he aded.

Dina Zulfikar, a prominent animal rights activist, told Al-Monitor over the phone that although the Egyptian Constitution provides for the protection and welfare of animals, the law does not punish the killing of dogs or cats or any kind of animals that are not pets, meaning that any citizen can kill any dog or cat on the street without any legal deterrence.

She explained that Article 355 of the Egyptian Penal Code punishes “any individual with penal servitude who deliberately and unjustifiably kills a riding animal, a carrying beast, a towing beast or any other type of livestock, or causes extensive harm to it.”

However, these penalties do not apply to killing or harming street animals, Zulfikar noted.

“The absence of an explicit legal text to punish those who harm street animals has led to the spread of killing and assault cases, especially against dogs, because Egyptians in general despise street dogs [because they believe they are dirty and carry diseases]. Some citizens are killing dogs in different ways, while local administration officials crack down on dogs or feed them poisoned food,” she added.

Zulfikar explained that the government has used a type of toxin called strychnine to get rid of dogs, although it is dangerous to human health and children in particular, as its effect lasts in the soil for 40 days. Strychnine is used to exterminate rats and rodents, and its use is limited in other countries.

This controversy, which has now come down to lawsuits, has existed for some time, especially after member of parliament Mona Mounir submitted an urgent official briefing request to parliament on Nov. 25, 2018, to hold the government accountable for its decision to export cats and dogs abroad, as well as the random killing of street dogs.

Mounir’s briefing request mentioned that GOVS, the government agency responsible for preserving and developing livestock, had approved the export of 4,100 dogs and cats to several countries for their meat.

Hassan Shafiq, GOVS deputy head, told Al-Monitor that there is no official government decision to export dogs and cats, but the export process is permitted in Egypt and is done according to specific requirements and permits.

He stressed that the local government departments do not randomly kill dogs; they only kill them after receiving complaints from citizens about the presence of rabid dogs that bite them or their children, noting that there were over 300,000 complaints in 2020.

He added that in the scientific and religious view it is not permissible to kill stray dogs or any kind of animals unless their presence results in harm that can only be removed by killing them to protect citizens.

“We cannot kill all dogs, and those who accuse the government of randomly killing all dogs are wrong because it is logically inconceivable that more than 20 million dogs will be eliminated in Egypt. But the government must also take action to protect citizens from rabies,” Shafiq noted.