The Turkish parliament approved a one-year mandate to deploy troops in support of the Tripoli government against an ongoing offensive led by eastern Libya commander Khalifa Hifter. 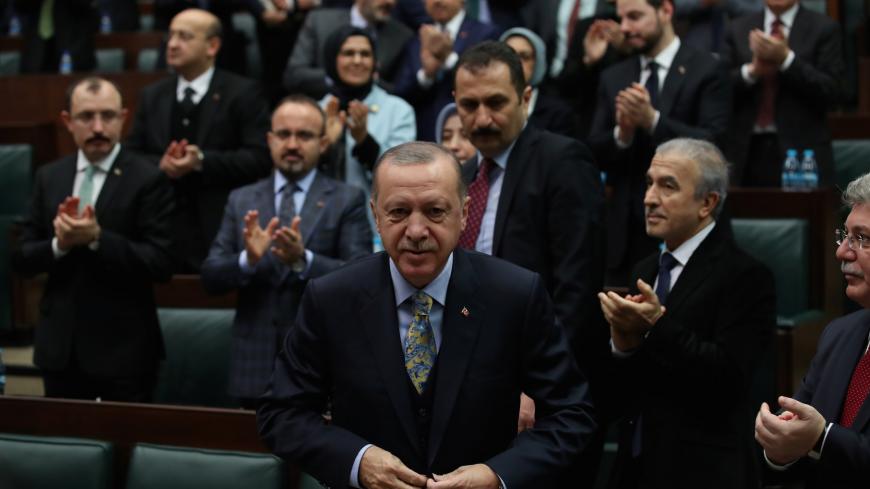 Turkish President Recep Tayyip Erdogan leaves his seat to address members of parliament from his ruling Justice and Development Party during a meeting at the Turkish parliament in Ankara, Turkey, Jan. 15, 2019. - REUTERS/Umit Bektas

In a measure with regionwide implications, the Turkish parliament approved a motion Jan. 2 to deploy forces to Libya during an extraordinary meeting before the start of its 2020 legislative session next week.

Though details remain unclear on the involvement of Turkish troops in direct combat operations, the vote established a one-year mandate for Turkish forces to transfer weapons, planes and vehicles in support of the UN-recognized Tripoli government headed by Fayez al-Sarraj.

The news comes one week after Sarraj submitted a formal request for Turkish military support, which Turkish President Recep Tayyip Erdogan said in December was the prerequisite for a troop deployment.

While Turkish drones and proxies have been increasingly active in Libya over the past year, the parliamentary vote, passed 325-184 with 80 abstentions, is expected to complicate a civil war and escalate tensions between regional actors who back opposing sides in the conflict.

“This is a repeat of the mistake that the governing party in Turkey made in Syria,” Faruk Logoglu, former Turkish ambassador to the United States, told Al-Monitor. “They are going to repeat the same mistake on perhaps a less controllable scale in Libya.”

He added, “It’s wrong. It will not serve the benefit of the Libyan people, nor will it serve the interests of the Turkish Republic. I think it will only serve to prolong, deepen and widen the conflict in Libya.”

Following the overthrow of Moammar Gadhafi in 2011, the nation has undergone nearly nine years of conflict. Late last year, Hifter said his Libyan National Army (LNA) would take Tripoli in an offensive that continues with the backing of Russian mercenaries and the governments of the United Arab Emirates and Egypt. Despite formal recognition as Libya’s current prime minister, Sarraj has primarily received military support from Turkey in recent months. LNA forces have retaliated, taking several several Turkish sailors hostage last summer and shooting down a number of Turkish drones.

Such divisions have wrought comparisons to proxy wars like the one in Syria, where Turkish forces have also backed militias, but a Libya deployment might pose greater threats to Turkish forces, said Soner Cagaptay, the director of the Turkish Research Program at the Washington Institute for Near East Policy.

Potential conflicts may arise in “keeping logistics lines open, because in between Turkish and Libyan sea space there’s going to be Egyptian and Greek planes and ships,” Cagaptay told Al-Monitor. “There’s a pretty serious risk of escalation coming up.”

The same day as the Turkish parliamentary vote, the leaders of Cyprus, Greece and Israel signed an accord to construct a $6 billion gas pipeline that will run through tracts of the eastern Mediterranean recently claimed by Turkey in an agreement with the Sarraj government.

The parallel developments could lead to a multinational escalation in the Mediterranean, as well as in Libya, where media reports also indicate Turkish-backed rebel fighters from Syria are being transferred to support ground operations against the LNA.

Speaking to the CNN Turk, Numan Kurtulmus, deputy chairman for Erdogan’s ruling Justice and Development Party, said the mandate “will ensure that the legal government in Libya remains in place and Turkey’s natural rights [in the Mediterranean] are maintained.”

All major opposition parties voted against the measure or abstained, with Iyi Party leader Meral Aksener calling troop deployment a “threat to our national security that would needlessly endanger the lives of our troops.”

“We became part of Syria’s civil war, and what did Turkey gain?” Aksener asked ahead of the vote. “It gained 5 million refugees, it spent $50 billion, it became a neighbor with Russia on both its northern and southern borders.”

In response to the mandate, the Foreign Ministry of Egypt released a statement saying such a deployment could “negatively affect the stability of the Mediterranean region,” and called for a response from the international community.

Shortly after the vote, Erdogan spoke with US President Donald Trump by phone in a discussion that “stressed the importance of diplomacy in resolving regional issues,” according to the Turkish presidency.

Though questions remain on the impact of a UN Security Council resolution banning the weapons transfers to Libya and whether the Turkish military has the capacity to hold two fronts in both Syria and Libya, Turkish lawmakers said significant developments would not take place in the coming days, without providing further details.

Cagaptay told Al-Monitor, “This prepares the groundwork for Libya to become the ‘new Syria’ in the sense that you will have Turkish-backed forces in the west and Russian-backed forces in the east and maybe the ultimate 'deal' is going to be ironed out again between [Vladimir] Putin and Erdogan.”