Although climate change is affecting the whole region, it seems Palestine is more vulnerable due to the political situation and Israeli policies against the Palestinians. 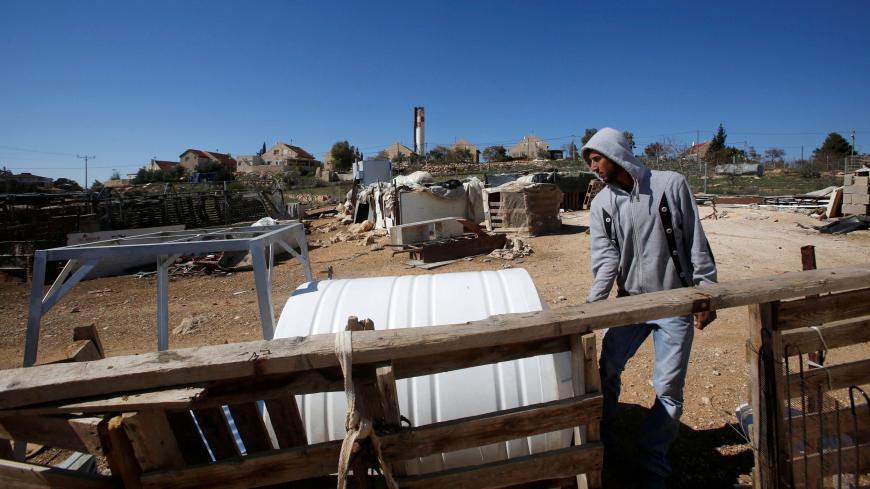 A water tank is moved into position by a Palestinian man in the village of Umm al-Khair, with the Jewish settlement of Carmel seen in the background, near the West Bank city of Hebron, Feb. 7, 2017. - REUTERS/Mussa Qawasma 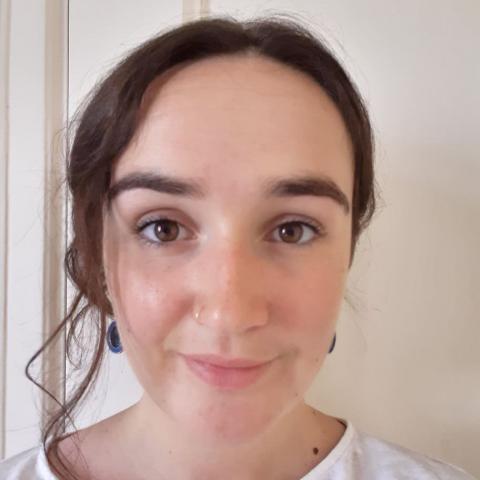 "People talk about climate a lot here," said Awdah Hathaleen, an activist from the West Bank. “They’re scared. When we hear there is a winter storm coming, we don’t sleep. When there is wind, our houses shake.”

Hathaleen told Al-Monitor that in recent years climate change has exacerbated the situation in the West Bank. “We get hotter summers and colder winters. Every year it gets worse and worse,” he added.

Hathaleen lives in Umm al-Khair, a Bedouin village in the south Hebron Hills that was established in 1948, with 160 people currently living there. The village lies next to Carmel, an Israeli settlement built in 1982, separated from Umm al-Khair by a fence. “A lot of houses here are tents because of the occupation and we are not allowed to fix them for winter,” Hathaleen said. Snow used to come every five years, he noted, but it is increasingly frequent and last time there was a big snowfall, eight tents collapsed.

Umm al-Khair is located in Area C, which is under Israeli control and represents about 60% of West Bank lands.

Asked whether Israel allows them to build houses, Hathaleen said, “If we do anything, they [Israeli authorities] will give us a stop working order or demolition order immediately.”

The hotter summers pose new threats for the village, too. “There is no water network allowed here,” he said. “We get seven hours a week to collect water.” Members of the community suffer increasingly from a lack of water and so does the environment around them, Hathaleen noted. “Trees don’t have enough water and they die. The village is attacked by the weather, we have no green.”

According to a paper published last year by Palestine’s Environment Quality Authority, Palestine can expect to be one degree Celcius hotter in five years, and up to 4 degrees hotter by 2090. The authority also estimates that rainfall could decrease by up to 90% by 2090.

“This will reflect negatively on all aspects of life in Palestine, including health, water, biodiversity, agriculture and energy,” Othman Sharkas, a geography professor at Birzeit University in Ramallah, told Al-Monitor. The authority’s report anticipates extreme water shortages, desertification and an increase in public health issues stemming from dehydration and cholera outbreaks.

“Despite the effects of climate change being broadly similar across the region, the Palestinians are more vulnerable, and this is directly to do with the political situation,” Zena Agha, a researcher at Al-Shabaka research center, told Al-Monitor. The Israeli occupation is the biggest nonenvironmental threat facing the Palestinians, and one that compounds the environmental situation, Agha said.

“Restrictions on the free movement of people and goods, the apartheid wall [the wall separating Israel from the West Bank], land grabs, settlement expansion and settler violence, and poor governance all threaten Palestinian food and water security, which increases climate change vulnerability,” she noted.

Agha pointed out the peculiar role of the Palestinian Authority (PA) — the governing body in the West Bank — in relation to climate change. “It has no sovereign jurisdiction over natural resources or large swathes of territory and wields no independent political will over how to mitigate climate risks,” she said. “Yet bizarrely, it is tasked with addressing climate change.”

The PA drafted environmental policy plans in 2011 and 2016, the latest of which states they will allocate $3.5 billion toward climate change adaptation plans over the next 10 years. Agha noted, however, that there was no indication of where the funds will come from.

Against this backdrop, members of the Umm al-Khair community have started to integrate climate activism into their existing protests. Hathaleen and other members of the community formed the Good Shepherd Collective, a group aimed at raising awareness of the situation in the West Bank. They have planted 1,500 trees in the village as a form of nonviolent activism and, in 2018, they set up a greenhouse for villagers to grow food to sell to markets. The greenhouse, they explain, offers a “tangible way of mitigating Israel’s colonial project in the south Hebron Hills.”

The question of collaboration with international groups like Extinction Rebellion or the school strike movement has also arisen. “We are with anyone who works for justice,” Hathaleen said, but establishing cross border activism is difficult given the political tensions in the region.

“Geopolitical circumstances make it difficult for us to collaborate on the climate issue,” Michael Raphael, a member of Extinction Rebellion in Israel, told Al-Monitor. “There have been attempts … but they are very small and they are under the radar.”

Being seen to collaborate with Israel could be dangerous for activists in Palestine, Raphael noted, and he himself feels uncomfortable visiting Palestinian areas because of the political situation. “As an Israeli I enjoy privileges when I’m there that Palestinians don’t — and I’m not willing to do that,” he added.

For Cody O’Rourke, communications director of the Good Shepherd Collective in Umm al-Khair, the history of activism in the village places the community in a unique position as climate activists. “The community of Umm al-Khair are refugees from 1948,” he explained. “And since the 1980s, they have been resisting forcible displacement.” This, O’Rourke believes, puts the community in a position to offer lessons to groups like Extinction Rebellion on how to run a resistance model. “They [Umm al-Khair residents] have been resisting in material ways for longer than most of the people in the Extinction Rebellion movement have been alive,” he added.

Agha, too, said that there is a rich history of environmental activism in Palestine. For now, however, politics continues to be the central factor compounding the environmental situation, she noted. “Unless the Palestinians have access to land and natural resources, they cannot adapt to climate change and remain vulnerable to food and water insecurity.”

Andrei Popoviciu has contributed to this article.