Providing assistance to Yemenis requires Oman to maintain a low profile and strike a political balance with its giant neighbor to the northwest, Saudi Arabia. 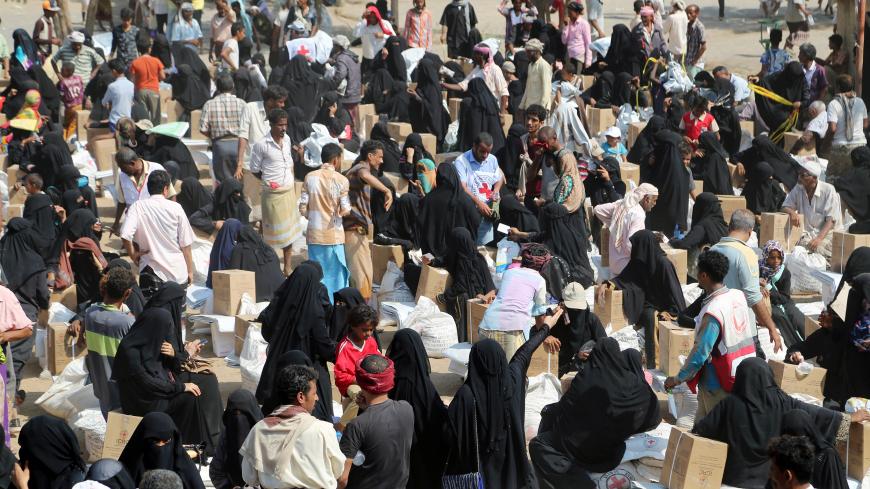 As Yemen’s civil war nears its sixth year in March, Oman continues to provide humanitarian assistance to Yemenis to alleviate their suffering, maintain stability along its border and enhance historical cross-border ties.

“Omanis look at Yemenis as human beings without trying to be superior,” said Ahmed Yahya Ahmed, who traveled in 2018 from Yemen to Sultan Qaboos Hospital in Salalah, Oman, to seek medical treatment for his sick father.

An Omani community-based initiative known as White Hands covered his day-to-day expenses and the cost of the treatment, about $3,900. In 2019 alone, more than 70 Yemenis hospitalized in Salalah benefited from the group’s assistance.

Like Ahmed, 80% of Yemenis are in dire need of assistance and thus see the Sultanate of Oman as the only gate to the outside world. Yemen’s only other land border is with Saudi Arabia — which is leading a military intervention against Yemen’s Houthi rebels. The war has taken more than 100,000 lives since 2015.

“We would like to thank Sultan Qaboos, a man of peace,” Ahmed said.

In 2018, Martin Griffiths, special envoy of the UN secretary-general to Yemen, declared that Oman is playing a “pivotal role” in helping Yemenis, the Times of Oman reported.

In parallel, the Omani government allows international organizations to operate from its territory. “In 2019, we sent 136 trucks of aid to Yemen,” said Jamila Hammami, mission head in Oman for the International Committee of the Red Cross (ICRC).

“We operate under the aegis of the Ministry of Foreign Affairs, so we don’t export anything unless it is approved and validated by local authorities, as per ICRC requirements,” she said.

Since the beginning of the war in Yemen, Oman has kept a prudently low profile over this brotherly assistance.

“I would like to know how many Yemeni refugees live in Oman, but our interlocutors do not share the figure,” Hammami said. She believes such discretion aims to preserve neutrality.

Omani academic Abdullah Baabood notes the sultanate is cautious not to be portrayed as interventionist.

Beyond its humanitarian commitment, Oman also plays a strategic and predominant role in Yemen, notably via diplomatic efforts. “We always facilitate any attempt for parties to talk to each other,” Omani Foreign Affairs Minister Yusuf bin Alawi bin Abdullah told Al-Monitor.

An Omani source familiar with the matter told Al-Monitor by phone that the country always makes sure this aid “doesn’t influence any ongoing political process.”

“For instance, if we try to facilitate talks between Houthis and the internationally recognized government, we won’t provide any announced aid to one side and not to the other,” he said.

For Giorgio Cafiero, CEO of Washington-based geopolitical risk consultancy Gulf State Analytics, “This aid needs to be understood within the context of bilateral affairs.” The analyst believes Oman prioritizes its own national interests when interacting with its neighbor, since the war in Yemen stands as “Oman’s No. 1 security threat,” he told Al-Monitor in a December phone interview.

Oman considers its border area with eastern Yemen a strategically important extension of its direct sphere of influence, and aims to nurture the sultanate’s historical, tribal, cultural, economic and political ties with Yemen beyond the conflict.

Yet Oman drew a red line by rejecting a request for tanks it received from Yemen’s al-Mahrah opposition leader, Ali Salem al-Huraizi.

Huraizi told Al-Monitor during a recent interview in Oman’s capital, Muscat, “Our Omani interlocutors said, ‘We are not part of this war.’”

According to Baabood, the sultanate indeed focuses on “quietly alleviating the humanitarian crisis without causing any undue criticism or raising any suspicion.”

Yet Oman maintains close ties with Iran, and angered Saudi Arabia and the United Arab Emirates by being the only Gulf state that refused to join the Saudi-led coalition fighting the Houthis. Iran is suspected of smuggling weapons to the Houthis in Yemen, including some weapons that perhaps travel through Oman — a claim Omani officials vigorously denied.

As part of this regional balancing act, Omani authorities do not allow private initiatives such as the White Hands to treat or assist any war-wounded Yemenis. Instead, the government provides official, organized and free-of-charge medical support in such politically sensitive cases, often with the consent of the United Nations and other actors.

In 2016, Al Jazeera reported that a group of 113 patients injured by Saudi-led coalition airstrikes received medical care in Oman, followed by 130 others. Two years later, a UN-chartered plane landed in Muscat carrying some 50 Houthi rebels wounded in fighting, provided that Houthi representatives would attend UN-led peace talks in Sweden.

Some of those war-wounded Yemenis had been transferred to the ICRC Weapon Traumatology Training Center in Tripoli, Lebanon, to get complex medical treatments, surgeries and physical therapy. Hammami said that their monthslong stay was supported by the ICRC, Omani authorities and the Lebanese Embassy to Oman.

“Other GCC [Gulf Cooperation Council] states have been grateful to Oman for treating injured Yemenis. … Oman is trying to help out Yemen without any sort of sectarian bias or political agenda,” Cafiero said.

Besides government-led initiatives, 200 Omani surgeons and health professionals have been trained by the ICRC since 2017 in war surgery, to treat patients injured by bullets, bombs and mines. “Our role is to develop this expertise in Oman. It is capacity-building, but it responds to the immediate needs of Yemenis,” Hammami said.

Behind most of these public and private initiatives dedicated to easing the suffering of Yemenis is the state-funded Oman Charitable Organization, which Hammami refers to as a key partner in supporting a logistics hub run by ICRC in Salalah.

In fact, the Omani source familiar with the matter indicated that any aid shipped from Oman to Yemen has to be approved by the Ministry of Foreign Affairs and the Council of Ministers.

At the time of publication, neither the ministry nor the Oman Charitable Organization responded to Al-Monitor’s requests for an interview regarding Oman’s humanitarian assistance to Yemen.

Abdullah al-Badi, Oman’s ambassador to Yemen until 2013, ensures that the sultanate safeguards a strong influence over al-Mahrah province while nurturing good relations with all parties, in part thanks to the aid it distributes to alleviate Yemeni suffering.

“They trust us since we do not play against one faction or another,” he told Al-Monitor. The former ambassador calls for the immediate cessation of fighting.

In Salalah, far from politics, Omani White Hands aid workers launched in 2019 a free guest house for Yemeni patients, next to Sultan Qaboos Hospital. In the corridors, men pray for the future of Yemen.

“Yemenis are tired. Everything is destroyed. Why are we at war?” he asked bitterly.

Quentin Muller contributed to this story.