Just how neutral is Oman in Yemen war?

Oman has claimed neutrality in the war in Yemen, but Saudi and coalition forces say the sultanate is smuggling weapons through its border with Yemen to Iran-backed Houthis. 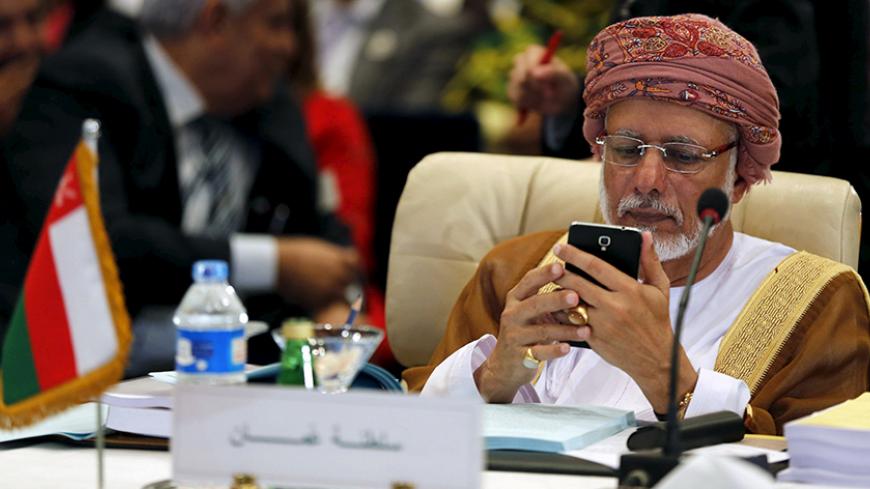 ADEN, Yemen — Oman considers itself a “friend to all,” a dubious claim as some believe the sultanate is facilitating weapons smuggling to rebel Houthis in Yemen.

Oman distanced itself from the Saudi-led military intervention launched in March 2015 to support the legitimacy of Yemeni President Abed Rabbo Mansour Hadi against Iran-backed Houthi rebels. Oman is the only Gulf Cooperation Council (GCC) country that has not declared its participation in the Arab coalition.

Instead, the sultanate adopted the role of mediator between the disputing parties and as a result became a cause for concern, rather than a solid backer, for both Yemen and Saudi Arabia. Meanwhile, reports have been circulating that Oman has deviated from its policy of impartial diplomacy.

The official but undeclared stance of Yemeni authorities is that Oman is harboring the rebels and has become an important facilitator of communication with Iran and its related branches in the region such as Hezbollah and the Iraqi government, which is openly affiliated with Tehran.

A source close to the Houthis told Al-Monitor that they and their ally, former Yemeni President Ali Abdullah Saleh, very much appreciate Oman’s stance. A Houthi-affiliated negotiation convoy and Saleh were warmly welcomed in Oman’s capital of Muscat earlier this year. Omanis are also offering humanitarian and medical support to treat the wounded, and welcome them in their hospitals.

But the question remains: Has Oman really been impartial in the Yemeni conflict?

Based on these details, Oman does not seem impartial. It is brokering the conflict that Gulf states are fueling. Saudi Arabia did not stand in Oman’s way in that role, perhaps because Oman was not participating in the war and because the Saudis felt Muscat could be an effective broker because of its strong ties with Tehran. While the GCC states compete with each other in certain respects and have diverging stances on various issues, they are unified when it comes to the importance of Gulf security.

But coalition states, especially Saudi Arabia, say Oman seems to be siding with Iran on the issue, and the Yemeni conflict has gone on too long. Oman, which shares a border with the Mahra sultanate in the extreme east of Yemen, seems to be involved now, they say.

On Sept. 18, Sultan al-Arada, governor of oil-rich Ma’rib province in northeast Yemen, told the Saudi-owned daily Al-Hayat that in August, Hadi’s Yemeni government forces had seized a shipment of weapons being smuggled on three vehicles with Omani license plates. Arada said the vehicles were on their way to Houthi militants in Sanaa.

The Yemeni official’s statement in another newspaper the next day could suggest that relations between Saudi Arabia and Oman are shaky. London-based Al-Arab published an analysis piece Sept. 19 on the thwarting of the Houthis' weapons smuggling. It said the fact that a Yemeni official made a statement to a Saudi-owned newspaper that implicitly accused Oman of playing a role in smuggling was a “notice from Riyadh, without raising the alarm for escalation.”

The weapons were seized in August but the news wasn’t announced until September, perhaps indicating that Saudi Arabia was considering the impact the revelation might have on its relations with Oman, and that it didn’t want to implicate Oman with evidence.

Qoraish news cited an Aug. 31 Intelligence Online story as saying Saudi Arabia is increasingly worried about Iranians in Oman helping to smuggle weapons to Houthis in Yemen through land and water routes. The article read that Saudi officers close to Saudi Minister of Defense Mohammed bin Salman publicly voiced their criticism, saying, “There is an Iranian smuggling lobby in Muscat.”

The account went on to say that Omani Gen. Sultan bin Mohammed al-Naamani, the minister of the palace office, a security post, is officially overseeing Omani internal intelligence. According to the newspaper, Omani intelligence has long invested in relations with Yemeni components under the cover of monitoring the borders between the two countries.

Based on the Intelligence Online information, Muscat is overlooking the Houthis’ support in Dhofar, an Omani province on the border with Yemen. There is similar speculation that the airport in Salalah — the main city in Dhofar — and the small islands in the area are being used to store Iranian military weapons that supply Houthi rebels. Muscat does not completely control this area, which has shown reluctance to being governed by the central authority.

The editor-in-chief of Bahrain’s Al-Wasat weekly newspaper, Jamal Amer (who is close to Saleh’s party), said Oman is practicing positive impartiality, but isn’t trying to evade responsibility for finding solutions. Rather, Oman is refusing to become enmeshed with one party against another.

Amer told Al-Monitor, “Muscat has been the only gateway for Houthis and their ally Saleh to the outside world, whether for official convoys affiliated with them or through welcoming many of the wounded in its hospitals. It has also offered humanitarian aid following the maritime and air blockade imposed by the Arab coalition.”

Oman’s policy regarding Yemen’s conflict is not anti-Saudi Arabia, Amer continued. Oman is preserving its ability to act as a window of communication between Saudi-backed Hadi and the Houthis.

Amer added that Hadi’s complaints about Oman reflect a similar Saudi stance, as Omani authorities have forbidden a tight political, economic and humanitarian grip on the Houthis and Saleh’s party. Amer ruled out the idea of Oman sending weapon shipments to the Houthis, given “the delicacy of such an act.”

Gulf affairs and Iranian policy researcher Adnan Hashem with the SAS Center for Political Studies said the vagueness of Oman’s foreign policy has helped it “maintain impartiality,” as it is trying to recognize two legitimacies in Yemen— those of Hadi and the Houthi coup against him.

Hashem told Al-Monitor that Oman’s strategy is dictated by the desires of the “Iranian lobby,” which can implement Iran’s vision at the expense of the Gulf’s vision without jeopardizing Oman’s security and domestic policy.

Oman’s government might not have a say in the smuggling activity it’s accused of overlooking, Hashem added. Some parts of the sultanate are not under sufficient supervision by the authorities, and the gaps have allowed Iran to wield its own influence and build wider ties with local and tribal authorities in Dhofar, a province that did not become part of the sultanate until 1975.