US withdrawal from Iraq is Israel’s worst-case scenario

The leaked letter published this week about the United States considering withdrawing from Iraq and Syria generated great concern within the Israeli security establishment. 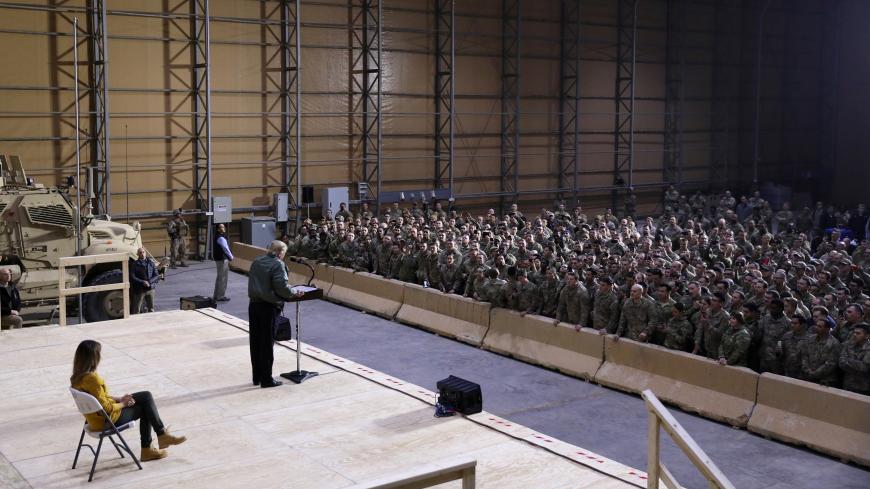 US President Donald Trump delivers remarks to US troops in an unannounced visit to Al Asad Air Base, Iraq, Dec. 26, 2018. - REUTERS/Jonathan Ernst

The letter of Gen. William H. Sili, commander of US military operations in Iraq, was leaked and then rapidly disseminated among Israel’s most senior security figures Jan. 6. In fact, a translated version in Hebrew appeared only minutes after the letter was leaked to the media, sweeping up the WhatsApp groups of Israel’s most top-secret (coded) defense systems. The content of the letter — that the Americans were preparing to withdraw from Iraq immediately — turned on all the alarm systems throughout the Defense Ministry in Tel Aviv. More so, the publication was about to set in motion an Israeli “nightmare scenario” in which ahead of the upcoming US elections President Donald Trump would rapidly evacuate all US forces from Iraq and Syria.

Simultaneously, Iran announced that it is immediately halting its various commitments regarding its nuclear agreement with the superpowers, returning to high-level uranium enrichment of unlimited amounts and renewing its accelerated push for achieving military nuclear abilities. “Under such circumstances,” a senior Israeli defense source told Al-Monitor under condition of anonymity, “We truly remain alone at this most critical period. There is no worse scenario than this, for Israel’s national security.”

After a few hours, it became clear that the letter had been leaked accidentally. Nevertheless, the American denial, which began from US Defense Secretary Mark Esper and trickled down from there, did not really calm down Israel’s defense-system sources. “It is sad to see the [US] president’s conduct has also ‘infected’ the military,” a senior Israeli security figure told Al-Monitor on condition of anonymity, “It is not clear how this letter was written, it is not clear why it was leaked, it is not clear why it was ever written to begin with. In general, nothing is clear with regard to American conduct in the Middle East. We get up every morning to new uncertainty.”

Twenty-four hours after the letter, the following assessment formed in Israel: Trump hasn’t decided if he’s staying or leaving. His inclination is to leave; he has no desire to see caskets of US soldiers being airlifted in Washington during an election year. Trump would be happy to leave Syria too, as he promised a long time ago. The US Army is trying to prepare a framework working plan toward an exit. And it was the preparations of this work plan that eventually generated the incident in which the letter was sent and then leaked. That, and perhaps also some unclarities in the American command chain. One way or the other, Israel must prepare for the worst-case scenario, because the odds are increasing that such a scenario may arise. According to this scenario (described in Al-Monitor in an earlier article), Trump would choose to abandon the Middle East and leave Israel alone on the battleground toward the 2020 elections. This would constitute the worst and most dramatic possible timing imaginable, when Iran would gradually abandon the nuclear agreement and inch its way toward the bomb.

The assessment is that Israel will inflict heavy pressure on Trump in the coming weeks and try to convince him not to abandon the Middle East in general, and Iraq and Syria in particular, before the US presidential election. Prime Minister Benjamin Netanyahu will use all the tools at his disposal in this context. Ambassador Ron Dermer will work overtime, and we can assume that Israel’s open communication lines to the evangelical Christian leaders in the United States will also be put to good use. The question is: What will happen if these efforts fail and Trump comes to the conclusion of abandoning the Middle East? “Under such circumstances,” an Israeli military figure told Al-Monitor on condition of anonymity, “We’ll have to do everything we can to prepare ourselves for a worst-case scenario.” Such a “scenario” means that Iran may go for the bomb in the final stretch: It can abandon the Treaty on the Non-Proliferation of Nuclear Weapons and take advantage of the US election year.

Meanwhile, Israel is trying to keep as low a profile as possible. Netanyahu instructed the Cabinet ministers not to give interviews and to avoid aggressive statements regarding the elimination of Iranian Qasem Soleimani. Netanyahu himself said, in a Cabinet meeting, that “the killing of Soleimani is a US event, not an Israeli event,” and he emphasized that Israel needs to do everything to distance itself from it.

Simultaneously, the Israelis hope and pray that the pragmatic wing of the Iranian leadership will prevail over the extremists, and that the Iranian response will not be too violent. That could enable all sides to claim victory and calm down. Such a scenario might bring new life to the American military involvement in Iraq and encourage Trump to postpone his intentions of evacuating American forces from the region. Iran’s missile attacks on Iraqi military bases housing US forces late Jan. 7 fits the definition of “measured response”; Israelis hope and pray that there will be no continuation. Netanyahu assembled the security Cabinet for two continuous discussions this week in order to consider all the possibilities and scenarios that could possibly follow Soleimani’s death.

Despite the danger of the complications regarding the death of Soleimani — and despite everything else written above — most members of the Israeli defense system and almost all of Israel’s Cabinet ministers and decision-makers believe that Soleimani’s elimination was absolutely vital. They feel that Soleimani’s absence will contribute not only to Israel’s national security but also to the stability of the entire Middle East. “The special status [of Soleimani] in Iran was proved beyond doubt in the funeral,” a highly placed Israeli security figure told Al-Monitor on condition of anonymity. “Soleimani attained the special, unprecedented status of a military general who symbolized both religious holiness and total accessibility to the Supreme Leader [Ayatollah Ali Khamenei]. He was the driving force behind both the Iranian rush for nuclearization and the Iranian strive to enlarge its influence up until the Mediterranean coasts. He was the one who crafted the Shiite blockade plan against Israel and pushed it forward with all his strength despite the losses that Israel inflicted on him. It is hard to believe that a replacement for him will be found [in Iran] in the near future. The Middle East, and the entire world, are much better off since he has left the arena."