Israel’s defense sector lauded the killing of Qasem Soleimani, but is bracing for an aggressive reaction by Iran and an escalation of regional tensions. 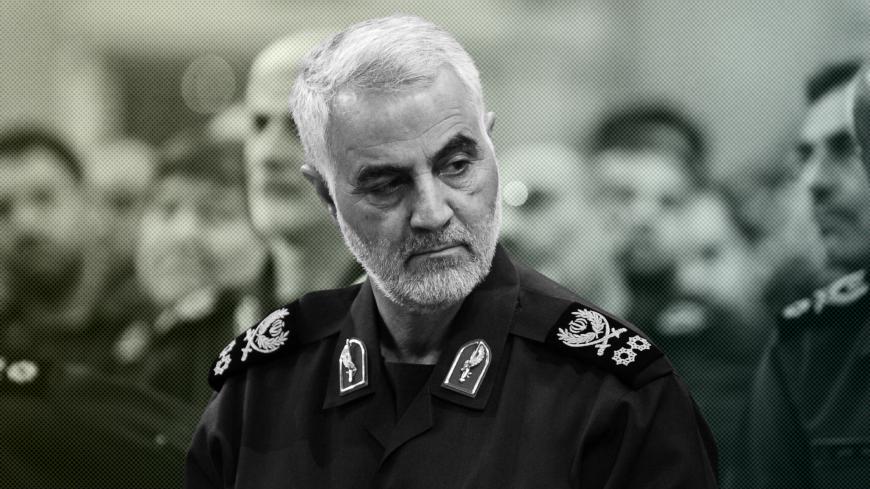 Israel views the killing of Iranian Gen. Qasem Soleimani as restoring US deterrence in the Middle East in one fell swoop — deterrence that had eroded over the past two years to the point that it was almost nonexistent. Lt. Gen. Aviv Kochavi, the commander of the Israel Defense Forces, even took the liberty of voicing veiled criticism in a Dec. 25 speech, saying Israel was acting alone against Iran’s Revolutionary Guard. “Tonight, they suddenly made a comeback,” a senior Israeli source, speaking on condition of anonymity, told Al-Monitor. “The Americans are signaling that they are still around and no one should mess with them. This is excellent news.”

An indescribable sense of satisfaction and elation filled the halls of power in Israel after news emerged of the assassination. In the morning hours of Jan. 3, senior political and defense figures had to bite down hard and practice tremendous restraint to avoid flooding the web with triumphant announcements and messages of congratulation to President Donald Trump. Why? Because Israel knows full well the extent to which this historic and strategic event has brought the entire region closer to war. IDF Chief of Staff Kochavi had already warned of such a scenario in his speech last week.

Israel urgently needs to distance itself from the resounding assassination, which could change the face of the Middle East. As these lines are being written, many in Israel’s defense and security agencies are praying that their commanders in the political arena will curb their inclination to join in the American celebrations. The situation is somewhat reminiscent of the first weeks following the 2007 destruction of the Syrian nuclear facility at Der ez-Zor. Then, too, Israel maintained total silence to provide Syrian President Bashar al-Assad with “ultimate deniability” and the ideal conditions to practice restraint.

For the past 20 years, and perhaps in all of modern history, Gen. Soleimani was Israel’s most bitter enemy. He was perceived in Jerusalem and Tel Aviv — the prime minister's office and Defense Ministry — not only as the operations officer of Iran’s global terror network and the brain behind the idea of the Shiite axis from Tehran to Tartus, he was also the great ideologue of the Islamic revolution, the heart of the resistance and the one who pushed the Revolutionary Guard with all his might toward the Israeli border, Damascus and Beirut.

In closed-door meetings over the past year, senior Israeli defense officials often explained that the war Israel was waging was not against Iran, but against Soleimani. Israeli and Western intelligence assessments claimed that Soleimani was not reporting to his superiors on his plans and not always telling Iranian Supreme Leader Ali Khamenei the truth, and suggested that without him, the spirit of the Iranian revolution would be far more moderate. We are in for interesting times. Soleimani’s name was at the top of the list of “indispensable” assassination targets. What remains now is to see whether Soleimani was, indeed, indispensable or whether he can be replaced. Hours after the US attack, Iran appointed Soleimani’s deputy, Brig. Gen. Esmail Ghaani, to replace him.

Israel has killed quite a few terror organization leaders in recent decades. Some were assassinated by other countries and armies. Such killings almost always resulted in regret on the part of the assassins, who yearned for the return of their target. Israel’s 1992 killing of Hezbollah leader Abbas al-Musawi was a classic example of this dynamic. He was replaced by Hassan Nasrallah, and the rest is history. One can hazard a guess that the West misses Iraq’s Saddam Hussein and Libya’s Moammar Gadhafi, who have been replaced by bleeding chaos that shows no sign of abating. Only rarely do such assassinations achieve their goals and a worthy replacement is not found for a long time. The classic example of such a case was the 2008 assassination of Hezbollah Chief of Staff Imad Mughniyeh, attributed to Israel’s Mossad and the United States. Nasrallah has not found a fitting substitute for Mughniyeh to this day.

To a large extent, Soleimani’s assassination dwarfs Mughniyeh’s. If there was one single instigator of Iran’s tentacles of terrorism, it was Soleimani. Israel had long been trying to understand what made him tick. “We are dealing with a determined rival, very sophisticated, very courageous, and with iron-willed patience,” a senior military source told Al-Monitor on condition of anonymity last month. “He does not lose his cool. We beat him up quite a bit, but he knows how to take it in his stride, to manipulate Tehran and make the supreme leader follow his footsteps, distancing him from President [Hassan] Rouhani and the Reformists. He will not abandon his goals under any circumstances and will continue striving to achieve them at all cost.”

Israeli experts attribute his zeal to religious extremism. “He is a classic Shiite Islamist,” a former top intelligence official told Al-Monitor on condition of anonymity in assessing Soleimani’s motivation. “He really believes in the need to spread the revolution. He really thinks Israel should be wiped off the map, and contrary to many others, he does not wait for others to carry out these missions, he simply takes them on himself.”

Israel’s intelligence effort from now on will focus on determining whether someone will be found to fill the huge military shoes Soleimani left behind. The prevailing initial assessment among senior Israeli defense officials is that a replacement for Soleimani will not be found.

“He is one of a kind,” an Israeli Middle East scholar with a background in intelligence work explained to Al-Monitor on condition of anonymity. “There are not many people like that, who combine such capabilities, such extreme ideology and such a tremendous influence on the supreme leader. We must not forget that the leader himself, Ayatollah Ali Khamenei, is already over 80, suffering from prostate cancer and leading an economically crushed state. We have to hold our breath now and pray that all this pressure being exerted on Iran at the same time will break the spirit of the elderly leader and help him make the right decision: a shift in direction and negotiations with the Americans on a new nuclear agreement.”

Israel is concerned about the second option of Iran not shifting direction: an Iranian military response against a US target that would force Trump to respond once again and force the Iranians to launch another front against a far closer and less dangerous “punching bag,” such as Israel. That is why Prime Minister Benjamin Netanyahu instructed his ministers Jan. 3 to avoid reacting to Soleimani’s killing. He himself could not resist publicly cheering the killing, congratulating Trump and saying Israel stands beside the United States.