How Israel is feeding fire of US-Iran escalation

Instead of stoking the fire and congratulating US President Donald Trump over the killing of Iran’s Qasem Soleimani, Prime Minister Benjamin Netanyahu should look at the larger picture. 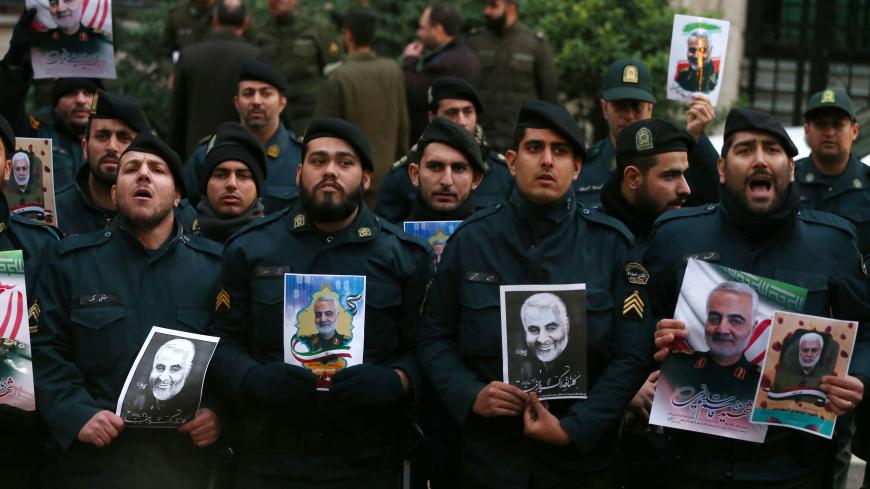 One cannot blame Israel’s interim Prime Minister Benjamin Netanyahu for jumping the line to praise President Donald Trump’s “determined, strong and quick action" in assassinating Iranian Gen. Qasem Soleimani. Almost no one in the world is more involved in the conflict between the United States and Iran than the Israeli prime minister accused of bribery, fraud and breach of trust. The signal for the deterioration from diplomacy to the violence that is now threatening a conflagration in the Middle East was given with Trump’s 2018 decision to pull the United States out of the nuclear deal with Iran and restore sanctions on the regime, subsequently tightening them. As Netanyahu himself testified, he was the one who convinced Trump to withdraw from the world powers’ agreement with Tehran.

A senior Israeli military source told our colleague Ben Caspit last month that Soleimani was adept at keeping Iran’s Supreme Leader Ayatollah Ali Khamenei away from Iranian President Hassan Rouhani and the country’s Reformists. Soleimani would likely not have managed it without the help of the Trump-Netanyahu duo. Their rejection of the 2015 nuclear agreement and refusal to demand improvements in the deal rather than jettisoning it weakened Iran’s pragmatists. Khamenei backed the nuclear agreement at the time, overriding Soleimani’s objections and expressing public support for Rouhani’s engagement policy. The US withdrawal from the deal and its tightened sanctions on Iran portrayed the Iranian president as a leader led astray by the West, and embarrassed Khamenei, as well. In the zero-sum game between the pragmatic and Soleimani camps, the result was one-nil in favor of the latter.

In the short term, Soleimani’s elimination from the Middle Eastern arena in general, and the anti-Israel one in particular, may undermine Iran’s operational capabilities and those of its proxies in the region. However, in the mid- and long-term, US conduct (it is hard to describe it as a policy) plays into the hands of Soleimani’s successors and of their partners on Israel’s northern front. The voice of Iran’s pragmatists calling for reforms has been silenced by the nationalist fervor gripping the public, for whom Iran’s honor is at stake and there is nothing more to be lost. Manifestations of this sentiment were expressed in the Iraqi parliament’s decision to demand the pullout of American troops and in anti-American demonstrations in Sunni Arab states. Egypt, Iran’s major rival, had no choice but to practice restraint over the condolence visit paid by Hamas leader Ismail Haniyeh to Tehran.

The strategic implications of the assassination must be examined according to Netanyahu’s scale of threats. For him, the Iranian nuclear program represents the top stage of the scale, the ultimate threat to Israel’s existence. It is hard to believe that harsher sanctions on Iran, which did not dissuade it from resuming some nuclear activity prior to the assassination, would change its position now that it has been humiliated for the whole world to see.

A second option seems no more plausible than the first one. It is just as hard to assume that the Iranians are seriously worried that even an unpredictable president such as Trump would risk a military campaign in the Middle East as he embarks on a tense reelection campaign at home. Experience with North Korea has shown them, too, that Trump excels at saber-rattling more than at draws. They proved their understanding in the liberty they took to provoke the Americans by accelerating their uranium enrichment.

We are thus left with a third option: pressuring the United States into freezing sanctions on Iran and returning to the original nuclear agreement, which enjoys broad American public support. Such pressure will probably not emerge from the offices of Israel’s current prime minister, but Israel will hopefully soon have a new, more pragmatic and balanced government. It would be able to rely on the positions of many senior defense officials, who have learned firsthand that a terrorist has not been born who does not have a replacement. Former Israel Defense Forces Chief Gadi Eizenkot had rejected claims that the nuclear deal had failed. Eizenkot argued that though the agreement was not without flaws, it did work. Maj. Gen. (Res.) Amos Gilad, for example, former head of the Military Intelligence Research Division and of the Defense Ministry’s Political Affairs Bureau, also argued that the Iranians are keeping the agreement, thus one should not try and cancel it. French President Emmanuel Macron said previously that Israeli intelligence “clearly showed us that even though the agreement is not perfect, it is preferable to the previous situation.” After all, 18th century French philosopher Voltaire had said that perfect is the enemy of good.

Analyses in the West claim that the Iranian regime’s strategy was to adhere for the time being to the nuclear agreement. Iran had decided to bide its time, jaws clenched, and hope that Trump would vacate the Oval Office in the November elections and that his successor would be attentive to America’s partners in the nuclear deal and to the interests of stability in the Middle East and global economy. Still, from what Iranian Foreign Minister Mohammad Javad Zarif said in July 2019, one could assume that Iran was also preparing for the possibility of confrontation. Zarif, who represents the pragmatists, said that there was a better than 50% chance that Trump would win a second term in office, which means that Iran would have to deal with Trump also in future years.

Chances of Netanyahu, the Israeli guide who led Trump out of the agreement, being forced to vacate his official residence — which for now has become a public shelter against prosecution on charges of corruption — are also close to 50%. That being said, it is unclear what exactly is guiding his main rival. Gantz’s congratulatory message (after the killing of Soleimani) praised the American president for a “courageous leadership decision.” But was this the brainchild of an election campaign or a true strategic position about the best way to cope with the Iranian nuclear threat?

"I’m not looking for a place in history," said Gantz in September 2015, reacting to Netanyahu’s strong criticism of the nuclear deal. This was shortly before Gantz entered politics. "I agree that a better agreement could have been achieved … but I see half the glass full and the success of distancing Iran from nuclear capabilities for 10-15 years," he noted. He also congratulated diplomacy, from saving the world from war.

Israel’s behavior in the Iranian arena is very similar to its conduct in the Palestinian one. In both cases, it prefers to stoke the fires that bolster extremists rather than support the pragmatists trying to douse the flames. Israel places obstacles on the road to a two-state solution with pragmatist Palestinians and proves to the Palestinian public that the Oslo Accord only resulted in more settlements. In the same manner, Israel is warning the world against Iran’s nuclear ambitions and at the same time turning the United States against Iran and proving to the Iranian public that a deal with a global superpower only resulted in more sanctions.