Israel reportedly dispatched a submarine to the Suez Canal and the Red Sea in what has been taken as a clear warning to Iran not to escalate tensions at this sensitive time of transition. 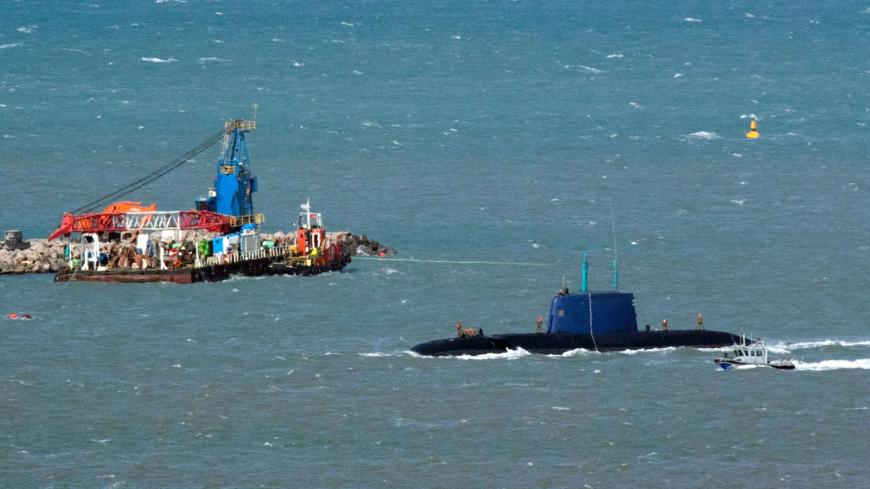 A picture taken on Nov. 22, 2016, shows an Israeli Dolphin-class submarine at Israel's naval port in the Mediterranean city of Haifa. - JACK GUEZ/AFP via Getty Images

Two submarines set off from different ports several weeks ago, heading in the same general direction: Iran. One was the US Navy’s guided-missile submarine Georgia, a nuclear attack sub. The other was an Israeli-flagged sub, a diesel-powered Dolphin-class submarine often used for intelligence collection, that crossed the Suez Canal three weeks ago. Egypt reportedly approved the crossing, sending an Egyptian navigator to board the sub, which according to foreign reports has nuclear cruise missile capabilities, as it entered the canal and accompany it throughout. Once he disembarked, the Israeli sub continued toward the Red Sea, from where it could have veered left toward the Strait of Hormuz.

Were the two journeys linked? According to Western intelligence sources, the vessels were part of a coordinated American-Israeli show of force designed to signal Iran that any attempt to exploit the presidential transition period to settle accounts with the United States or Israel would be met with an immediate and powerful response.

The Israeli submarine story was first revealed on Dec. 21. Israel’s public broadcaster Kan television reported that an Israeli sub had crossed the Suez Canal “openly and with Egyptian approval.”

The report cited Arab intelligence sources, but Israel did not deny it. On the same day, Israel Defense Forces chief Lt. Gen. Aviv Kochavi issued a warning to Iran. “Lately, we’ve noticed a rise in Iranian threats against the State of Israel. If Iran and its partners, members of the radical axis, either directly or by proxy, take action against the State of Israel, they will find themselves in a very costly endeavor,” Kochavi said at a military awards ceremony. “The IDF will strike all those involved in activities against the State of Israel or against Israeli targets, whether in part or in full, whether near or far.”

Israel’s eyes are focused on the Jan. 3 anniversary of the assassination of Iranian Revolutionary Guard commander Qasem Soleimani. Western intelligence sources attribute Kochavi’s unusually detailed statement to intelligence assessments that Iran is planning to retaliate against Israel for this or other security incidents attributed to Israel days before President Donald Trump vacates the Oval Office or shortly after, before his successor Joe Biden has time to settle in.

The last time an Israeli sub was reported crossing the Suez Canal was in 2009. According to foreign intelligence assessments, such vessels have done so only a handful of times in the ensuing years. “Someone wanted the crossing to resonate throughout the Middle East, and especially in Tehran,” a Western diplomat serving in the Middle East told Al-Monitor on condition of anonymity. “Someone wanted this to happen in tandem with the deployment of the Georgia to the region, and the goods were delivered in full.”

According to various theories making their way around the Middle East, Trump is planning a pre-emptive strike on Iran just before he leaves office. The theories are based on rumors and details of actual events, such as the US bomber overflights of the region, submarine and aircraft carriers headed for the Persian Gulf and of course, and Trump’s firing of his defense secretary shortly after the November elections.

To underscore the cautionary message, IDF spokesperson Brig. Gen. Hidai Zilberman granted an interview to the Saudi Elaph site, openly referring to the Israeli sub’s Suez crossing. Israeli submarines, he said using the plural, are quietly “sailing everywhere.” Zilberman did not confirm the reported crossing but said the IDF operates freely everywhere in the Middle East. He also noted that Israel is closely monitoring Iranian movements in the region. Iran could try to attack Israel from Iraq or Yemen and therefore Israel is also watching those states, he said.

If the sub that sailed into the Red Sea did head for the Strait of Hormuz, Yemen and Iraq would have been on its course. Israel’s signals and warnings are therefore directed not only at Iran but at all its proxies in the region and anywhere that could provide a launch pad for attacks against it.

With the Jan. 3 anniversary of Soleimani's assassination, the changing of the guard in Washington on Jan. 20, Israeli elections March 23 and Iran's presidential elections in June, “We are talking about a decisive period that will shape the Middle East for the coming years,” a senior Israeli diplomatic official told Al-Monitor on condition of anonymity. “We must remain vigilant and make it clear to all that any provocation will be met speedily and forcefully.”

Amid the various signals and warnings, Israel and Iran are waging a constant cyber war, with less-than-successful Iranian attempts to undermine Israel’s cyber infrastructure and retaliatory attacks attributed to Israel. Meanwhile, Israel is heading for a fourth election in less than two years, and relations between Prime Minister Benjamin Netanyahu and Defense Minister Benny Gantz are at an all-time low. In this chaotic situation, all sides must beware of any miscalculation that could plunge the entire region into a conflagration that no one wants.