Netanyahu's land of the settlers

Did Prime Minister Benjamin Netanyahu really think that he could fool US President Donald Trump and announce annexation of the West Bank without an angry response from the Americans? 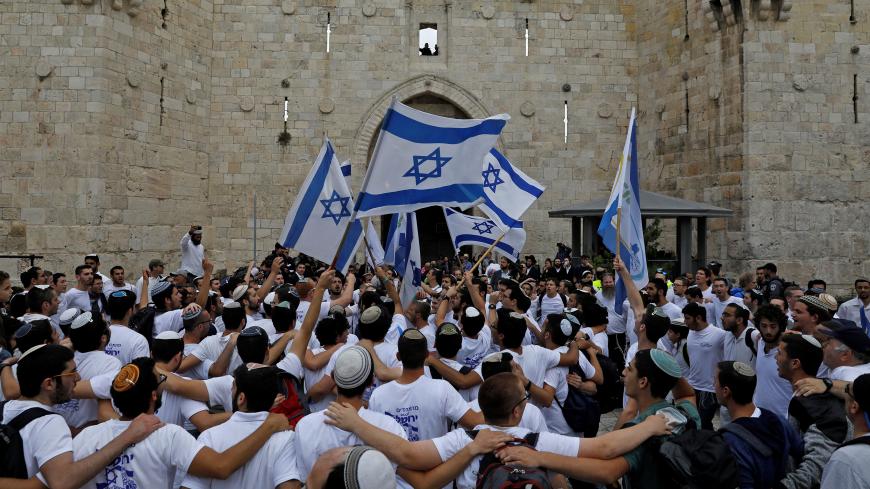 Even Prime Minister Benjamin Netanyahu’s supporters, admirers and enthusiasts on the right understand that he is in a frenzy to impress them. At a time when his political and legal future is uncertain, he is doing everything to give them the impression that he is the king of the world, hopping from the White House to the Kremlin like one of the family.

It started last week at the Jan. 23 “Holocaust festival” in Jerusalem — the fifth Holocaust Forum — continued with the presentation of the “deal of the century” at the White House, accompanied by a hasty Netanyahu promise to immediately annex West Bank territories, and ended with an especially embarrassing visit of the Israeli prime minister to Moscow. The official excuse was to advise Russian President Vladimir Putin about the US peace plan, but all Netanyahu wished to do was bring the young Israeli Naama Issachar home, on his plane, upon her release from a Russian prison. Issachar was convicted on a light drug charge and sentenced disproportionately to 7½ years in prison. But between the injustice of her case and her becoming an Israeli hero — whom the prime minister himself frees from prison and brings home as a hero, as if she was sent to defend her people and her country — the distance is huge.

In the midst of all this, Netanyahu made one big mistake. The ceremonious press conference at the White House had not yet ended and he already ran to announce to the people of Israel that on that very Sunday, Feb. 2, he intended to bring the vote to annex the territories to the government. Apparently, the dream of the right in Israel was about to come true about a month before the March 2 election — but the haste was the devil. The hurried announcement turned out to be a fatal error.

Under normal circumstances, Netanyahu would surely have enjoyed every second after the presentation of the deal of the century, let the days go by and offered every paragraph and letter in the plan as his personal achievement. Then, after some consideration and preparation by the security establishment and the Foreign Ministry in order to “soften” those who needed to be before such a critical announcement (the king of Jordan, the president of Egypt), he would have brought the annexation for a vote in the government. But Netanyahu has no time. The clock is ticking to the most crucial election of his life, and the polls are far from guaranteeing him victory. For him, this quick annexation is the biggest rabbit he could have pulled from his hat right now. And thus, mere moments after the presentation of the plan he gathered the Israeli journalists who accompanied him to Washington and declared “annexation now.”

Jared Kushner, son-in-law of the US president and one of the architects of the deal of the century, quickly put Netanyahu in his place. In a Jan. 30 interview for the American news site GZERO, he said “not now” regarding the annexation and noted that Israel should wait until after the election. “We agreed with them [the Israelis] regarding the creation of a committee that will prepare the map,” Kushner added. “There must be an Israeli government for this to go forward.” According to him, several months of work will be needed in order to arrive at an agreed-upon document, and only then could a move be made on the ground. Did Netanyahu not know this? Did he really think he could fool President Donald Trump and announce annexation without an angry response from the friendliest American administration Israel has ever known?

On his way back from Moscow, a senior member of Netanyahu’s entourage told Israeli journalists on condition of anonymity, “It wasn’t done in malice, we are now checking things.” The source explained that Israel intended to first annex the Jordan Valley, the area north of the Dead Sea and the West Bank settlements, and only later the area surrounding them, which requires the preparation of precise maps. “It’s all a matter of a technical error,” he concluded. But the explanation sounded strained and unconvincing. Instead of being impressed at how Netanyahu brought them annexation on a silver platter, all the settlers see now is his agreement to the establishment of a Palestinian state.

For Minister of Defense Naftali Bennett this is an opening to promise the same core of settlers that he would force the prime minister, and this is exactly the last thing Netanyahu needs right now. Bennett’s party, Yamina, issued a statement that said: “Missing the opportunity [of annexation] will be a hard blow to the settlement enterprise. Half a million residents of Judea and Samaria [the West Bank] and the Jordan Valley long for sovereignty.”

It is not really clear what the hard blow was that the settlers suffered aside from disappointment, perhaps. On the other hand, the mentioning of the number of settlers, half a million, had a clear purpose. To remind who ever needs a reminder that the settlers make up a significant electoral power. Netanyahu has built his campaign to count on them for three election campaigns in a row. Bennett, for his part, is now working to draw them to himself.

“I’m going to exert all the pressure possible to push for sovereignty now,” he said in the statement. It seems that Bennett does not truly believe that Israel could annex now, certainly not after the Trump administration’s clear statement. But in an election you have to play the game. From now on, Netanyahu on the one hand and Bennett on the other will shower consolation prizes on the disappointed settlers.

The senior source in Netanyahu’s entourage could check as much as he wants, but it does not seem that the US administration would budge from its broad proscription of unilateral steps, certainly now before the election in Israel and even before efforts have been made, at least for appearances’ sake, to bring the Palestinians into the plan built in the White House in sole consultation and with the clear interests of Israel.

In this situation, Netanyahu will have to distribute other little sweets to the settlers in order to mask the bitter taste of his hasty announcement. For instance, passing large budgets for them as the State of Israel’s true pioneers. Additional construction in the settlements will be a little hard, but Netanyahu has no problem promising that right after he is elected, he will start with a construction boom like none the Jewish settlements in the West Bank have ever seen.

What will the rival from the Defense Ministry do? After all, he is fighting for the same votes. Bennett has rabbits in his hat, some of which he has been pulling out, to the displeasure of the security establishment. Until March 2, he has to be especially creative in order to prove that he and not Netanyahu promises a certain annexation on the one hand, and the thwarting of a Palestinian state on the other. Since the 1995 assassination of Prime Minister Yitzhak Rabin, Israel has been led by the leaders of the right to places that are meant to appease the settlers. The price asked of the millions of citizens who are not settlers is extraordinarily high.