Blue and White leader Benny Gantz should continue focusing his campaign on the charges against Prime Minister Benjamin Netanyahu, instead of falling into the trap of a diplomatic battle. 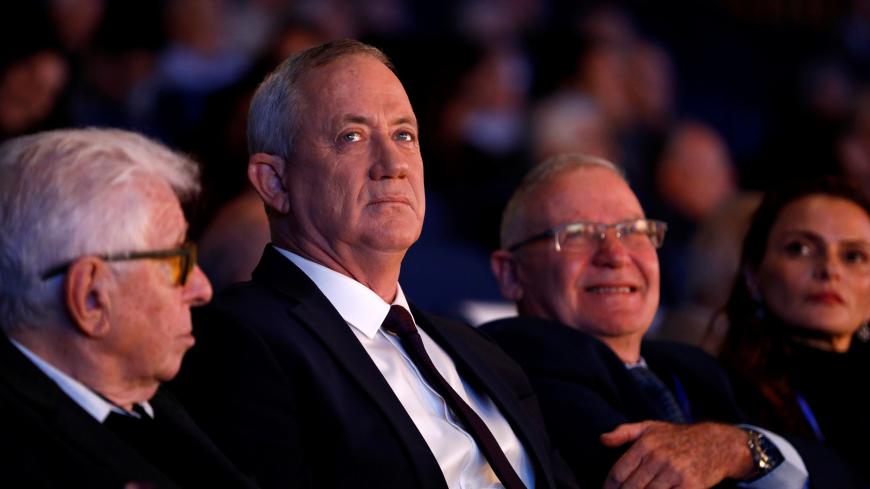 “Unseating an incumbent prime minister” is not as easy as Prime Minister Benjamin Netanyahu and his merry band frame the legitimate, legal, democratic process (the March elections) leading to regime change.

A hold on power grants an incumbent a significant advantage over the opposition in setting election campaign agendas. Foreign leaders seek the incumbent’s company, not necessarily out of any unusual admiration for the man, and his wife, Sara Netanyahu. A foreign leader’s handshake with the leader of Israel’s opposition is an option. A photo-op with the prime minister is a real treat that promises headlines at home. The guest often returns home with an arms’ deal in his pocket and the promise of a good word to be whispered in the ear of the friend at the White House.

My colleague Mazal Mualem attributed the Likud party’s improved poll results this week to Netanyahu’s “unprecedented” diplomatic blitz in recent days. The accused No. 1 in the indictment filed against him in the Jerusalem District Court on Jan. 28 took advantage of the World Holocaust Forum he hosted in Jerusalem on Jan. 23, to immortalize himself in the company of presidents and barons. With the help of evangelical friends and a settler-loving US ambassador to Israel, David Friedman, the prime minister arranged a display of pomp and circumstance for himself at the White House on Jan. 28 in the guise of a peace plan presentation. On his way home from Washington, he stopped off in Moscow for yet another photo-op with Russian President Vladimir Putin, earning himself a media blitz when he landed back home with the “prisoner of Zion,” Naama Issachar. Issachar, a backpacker caught with a few grams of hash at Moscow airport, was freed from prison and flew home with Netanyahu. Israel paid in hard currency for her release.

His plane engines had barely cooled, and Netanyahu was off to Entebbe, Uganda, where he faced the cameras on Feb. 3, alongside the head of Sudan’s Sovereign Council, Abdel Fattah al-Burhan. We may well see additional handshakes with foreign leaders in the run-up to the March 2 elections and hear of dramatic developments in Israel’s ties with one or two Persian Gulf principalities.

Channel 13 News has been airing a series of reports by its diplomatic analyst Barak Ravid this week, titled “Netanyahu of Arabia,” describing the prime minister’s close ties with the United Arab Emirates. Who even remembers that the 1993 Israeli-Palestinian Oslo Accord, which Netanyahu has savaged, paved the way for major Israeli breakthroughs in relations with the Gulf and Maghreb states, including the opening of official Israeli missions in their capitals? How many young Israeli voters trekking through the ancient Jordanian town of Petra and vacationing in its Red Sea port of Aqaba know that it was the Oslo Accord that paved the way for the peace treaty with Jordan the following year?

Indeed, as Mualem wrote, such a blitz of diplomacy has not been seen here in recent years. The explanation is quite simple. In recent years, more than 10 to be exact, Netanyahu has been in sole control of Israel’s foreign relations. He calls all the shots. The generals running the opposition Blue and White party have been exposed as helpless rookies in the diplomatic arena. Rather than relying on Netanyahu’s publicly stated December 2018 opinion — “You cannot bring a diplomatic plan on the eve of the elections without receiving a mandate for it” — Blue and White hailed US President Donald Trump’s “deal of the century” as nothing short of historic. In doing so, they became mere extras in the play scripted by Netanyahu and his White House partners.

From now on, the main opposition party bears joint responsibility for escalating the crisis in Israel’s ties with the Palestinian Authority, as well as for the Arab, Muslim and international onslaught on the settlement annexation and Israeli-Arab transfer plan included in Trump's peace plan. A party aspiring to lead the country’s next government is muzzling itself against responding to the waves of criticism emanating from the offices of the Arab League in Cairo and the Organization of Islamic Cooperation in Jeddah, which backed the Palestinian rejection of the plan. The party cannot respond to the Kremlin’s displeasure with the US-Israeli move, nor to the threat issued by the European Union’s foreign policy chief Josep Borrell of a severe response to any Israeli attempt to annex settlements.

In order to extricate themselves from the deal of the century trap into which they walked, the Blue and White leadership must restore the election campaign agenda to its fitting place — the harsh indictment against Netanyahu. The military ranks of the Blue and White leaders do not provide them with an advantage in the public/media arena on security issues, such as the Iranian nuclear program and the conflict with Hamas. They would also do well to leave the elusive vision of peace to the joint ticket of the Labor-Gesher-Meretz parties. All they have to do until March 2 is to avoid all the landmines placed before them, such as the scandal over the seemingly lurid correspondence between a candidate for a judgeship and Finance Minister Moshe Kahlon, a member of the judicial appointments panel, which gives a bad name to Netanyahu’s nemesis, the state’s law enforcement authorities and its judiciary.

Netanyahu spares no effort in throwing the public and the media tempting tidbits designed to divert attention from the corruption scandals dogging him. The opposition’s best response to the waves of Netanyahu handshakes with foreign leaders is a campaign of head shaking over his alleged corruption. The 63-page indictment filed by the State Prosecution against Netanyahu in the Jerusalem District Court should replace the 181-page document that Trump handed him at the White House on the same day. An indictment of an incumbent premier on charges of bribery, fraud and breach of trust is a far more “historic document” than the one with which Netanyahu was presented in the East Room.

A no-less-historic document, related to yet another corruption scandal with which Netanyahu’s name has been linked — the acquisition from Germany of submarines and ships to protect Israel's offshore gas drilling platforms — also awaits the opposition in the office of the Center of Public Integrity. Last week, five former senior Defense Ministry officials joined the nongovernmental organization's demand that State Comptroller Matanyahu Engelman launch an official probe into the affair, against Netanyahu in particular. All of them, including the then-legal adviser of the Defense Ministry and the head of the defense acquisitions administration, expressed their willingness to testify before the comptroller. Presumably, the State Comptroller, who has earned himself the sobriquet of the “state comforter,” will not rush to restore the multibillion-shekel affair to the agenda.

Perhaps, though, Blue and White did not walk into a trap with the deal of the century. Maybe its leaders embraced the stillborn plan with their eyes wide open. After all, the historic declaration by former Prime Minister Ehud Barak after the failure of his Camp David summit with then-PLO chief Yasser Arafat in 2000 that “there is no Palestinian partner” has served as the basis for a number of unity governments.