Netanyahu discovers hospitality has its limits

Prime Minister Benjamin Netanyahu tried to ingratiate himself at both the White House and the Kremlin, but now finds himself home alone. 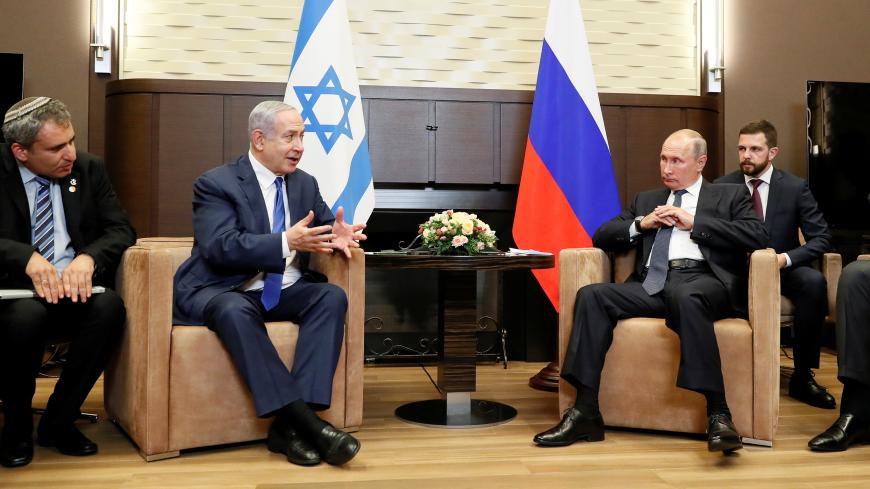 Zachary Baumel, an Israeli soldier, was killed in 1982 in Lebanon, but his remains were returned to Israel only this year, 37 years later, with Russia's assistance. At the widely covered funeral for Baumel on April 4, days before elections for the 21st Knesset, Prime Minister Benjamin Netanyahu boasted that Russian President Vladimir Putin had himself gone to the trouble of ensuring the return of the army boots and jumpsuit worn by Baumel along with his remains, which were discovered in Syria.

Two months later, in June, Putin dispatched national security adviser Nikolai Patrushev to Jerusalem for a rare meeting with his American and Israeli counterparts, John Bolton (since fired) and Meir Ben-Shabbat, respectively. The Prime Minister’s Office reported at the time that their discussion focused on Iran, Syria and other regional issues. Speaking on the occasion, Netanyahu thanked Putin and President Donald Trump for agreeing to the “security summit,” and further remarked, “I deeply value the strong relationships that Israel has with both leaders and both countries.”

The high-level Russian official, however, proceeded to throw cold water on the prime minister’s enthusiastic description of his special relationship with Putin. Taking the opportunity at a photo-op with Netanyahu, Patrushev told reporters that Israeli airstrikes against Iranian military targets in Syria were “unwelcome,” adding, “We need to alleviate the concerns of Israel by non-military means.” As for Iran, Patrushev praised the regime for “contributing a lot to the fight against terrorism in Syria,” calling Tehran a “Russian ally.” But who remembers his words? What was seared into the minds of Israeli voters were the giant election campaign billboards depicting Netanyahu with Trump and with Putin.

It turns out that the “strong relationships” with both leaders are not sufficiently strong to deal with the case of Naama Issachar, a young Israeli American arrested in April at the Moscow airport en route from India to Israel. On Oct. 11, a Russian court sentenced Issachar to seven and a half years in prison after she admitted to possession of 9.5 grams of hash for personal use. Moscow is reportedly conditioning Issachar’s release on the extradition to Russia of Aleksey Burkov, a hacker jailed in Israel, instead of his being extradited to the United States, where Burkov is wanted on suspicion of massive online fraud.

It appears that the prime minister’s ties to Putin are not strong enough for the Russian leader to acquiesce to Netanyahu’s request to pardon Issachar. At the same time, Netanyahu’s relationship with Trump is insufficiently robust for the American president to intervene on Israel’s behalf.

The Russian president is happy to acquiesce to requests such as holding an official ceremony in Moscow to hand over the effects of a fallen soldier or sending a senior official for a photo-op with Netanyahu on the eve of elections. Releasing a hapless young Israeli woman, however, carries a bigger price tag: rejecting the US extradition request for Burkov.

The Issachar-Burkov affair encapsulates the strategic trouble into which Israel has been thrown. Netanyahu sought to convince people (and himself?) that he could dance at two weddings at the same time – at both the Kremlin and the White House — but instead has found himself home alone, frozen out of both places.

“For years, it was the US that took care of Israeli interests in the Middle East and sought to promote them,” Nimrod Goren, head of the Mitvim Institute for Regional Foreign Policies, told Al-Monitor. According to him, while the two countries did not always see eye-to-eye, and the United States was not always willing to invest to the extent and in the type of effort that Israel wanted, its presence and activities in the Middle East were nonetheless a significant component in Israeli national security and regional foreign policy.

“In recent years, under the Trump administration,” Goren remarked, “US policy in the Middle East has become less coherent and less beneficial for Israel. Whether on the Palestinian issue, where Trump’s moves distanced prospects of peace, or whether on the Syria issue, where the US has vacated the stage for Russia.”

Arab states, among them loyal US ally Saudi Arabia, were quick to identify the shift in the regional power balance. In December 2017, Alex Greenberg wrote for Mida, a right-wing website founded by Ran Baratz, former public diplomacy chief at the Prime Minister's Office, “The Russians are willing to use force if it serves their interest, while the US is afraid of its own shadow.” Greenberg also noted at the time that absent a military option, leverage or pressure points, Trump’s demand that Russia distance itself from Iran in Syria was pointless and unfeasible.

This shift in the power balance was also highlighted in the extent of the younger Arab generation’s views of the superpowers. The annual Arab Youth Survey published in 2017 revealed that 21% of those polled in the Arab states viewed Russia, not the United States, as the region's top non-Arab ally, compared with only 9% who felt that way in 2016.

In a July 2016 article, Col. (res.) Ephraim Kam, deputy director of the Institute for National Security Studies, pointed to the implications for Israel of the growing ties between Russia and Iran. Russia, the former Military Intelligence expert wrote, was willing to supply Iran with advanced weapons that would provide it with a qualitative edge over Israel. In the future, Iran might transfer those Russian-made weapons to Hezbollah. He also warned that improved ties and cooperation between Tehran and Moscow would boost Iran’s position in the region, enhance its military capabilities and help expand its nuclear infrastructure.

Trump's recent abandonment of the Kurds and his pointless courting of Iranian President Hassan Rouhani prove that the American president excels at stepping on the toes of his Middle Eastern allies. On the other hand, Putin’s cooperation with Iran and his surprising visit to Saudi Arabia, on Oct. 14, indicate that the Russian leader is the one capable of dancing at two weddings at the same time. It is worth recalling that the head of Shin Bet, Nadav Argaman, foresaw the cyber meddling of a foreign state in Israel’s elections, a barely veiled nod toward Russia, in January stating, “I can’t say at this point for whom or against whom.”

Russia’s apparent help in Trump’s election did not stem from Moscow's concern about the best interests of the United States. When Putin handed Netanyahu Baumel’s personal effects — a contribution to Likud’s election propaganda — he also did not necessarily have Israel’s best interests at heart. Regardless, the Russian president will hopefully accept the request by the head of Israel’s transitional government, Netanyahu, to release Issachar. The was the case even if by doing so earlier, he might have been helping Netanyahu hold on to his position a little longer, contrary to Israel’s best interests.