In order to get Naama Issachar released from a prison in Moscow, Israel broke its rule of not interfering in real estate disputes related to churches in Jerusalem. 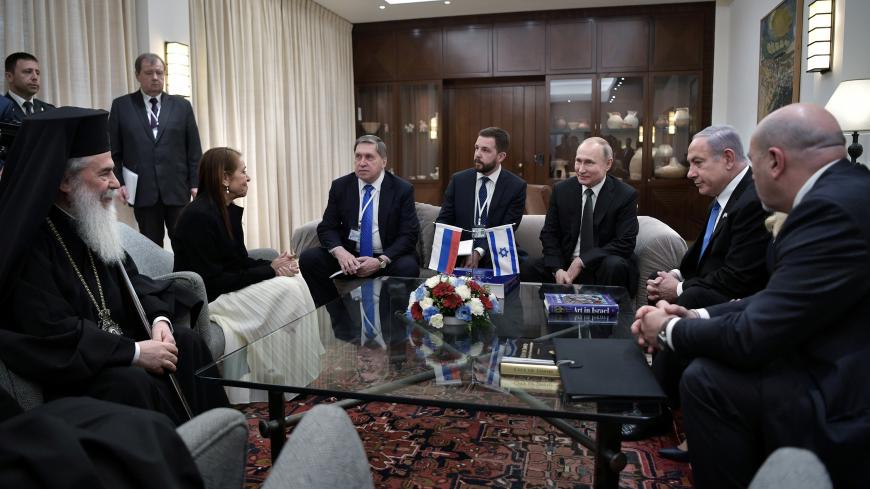 Prime Minister Benjamin Netanyahu has boasted many times of his close relations with world leaders, foremost among them US President Donald Trump, and less obviously, Russian President Vladimir Putin. Thanks to the relationship with Putin he managed to achieve the release of the Israeli-American Naama Issachar, who has been imprisoned in Russia the past few months. The price of the deal, it seems, is not very high, certainly compared to past deals to release soldiers or kidnapped citizens, where thousands of murderous terrorists were freed. Netanyahu has shown that his relationship with Putin has a practical payoff, even if the Russian president continues to support regimes that are enemies of Israel, like Iran, and opposes opening the nuclear deal and sanctions on the ayatollahs.

Issachar was arrested in April 2019 during a stopover at the Moscow airport on her way from the Far East to Israel. A relatively small amount of 9.5 grams of hashish were found in her bag. In October, a Russian court convicted her of possessing drugs and of trying to smuggle them into the country, and gave her a surprising heavy sentence of 7½ years in prison. The Israeli Foreign Ministry called it “a disproportionately heavy punishment to be handed out to an Israeli young woman with no criminal record,” and the feeling in Israel was that Issachar was punished harshly as a means for the Russian government to exert pressure on Israel to receive some kind of exchange.

With the announcement of the sentence Netanyahu declared in a statement that he will work personally on Issachar’s case and talked about it with Putin, noting that “the punishment being demanded by the Russian prosecutor is disproportionate and does not fit the nature of the offense being attributed to Issachar.” He also spoke with her family and promised to work to free her. After the Moscow court rejected Issachar’s appeal, Netanyahu told her family, “We will continue doing everything we can to bring Naama home."

Last week, my colleague Ben Caspit reported that Issachar’s uncle, Asher Issachar, is a driver for the prime minister’s office, but he believes that Netanyahu was working to free her not because of this connection but rather for political reasons.

Leading up to Putin’s arrival in Israel Jan. 23 for the ceremony marking 75 years since the liberation of Auschwitz, various reports were published according to which progress was being made in the negotiations to free Issachar. Putin did not bring Issachar with him on his plane, but met with her mother here and told her, “Everything will be alright.” Later, Issachar submitted an official petition for pardon, which was accepted. Netanyahu met this morning, on Jan. 30, with Putin, and he is expected to bring back to Israel with him Issachar. The big question is: What is Russia getting for the pardon of Naama Issachar?

Relations between Israel and Russia have been considered good in recent years, although there are friction points, like Russia supplying weapons to Iran and Russian control in Syria, which to some extent limits Israel’s military activity. In September 2018, a conflict broke out between the two nations following a missile fired by the Syrians that downed a Russian military plane, a short time after Israeli air force planes attacked in Syria. Russia blamed Israel, which has since worked to mollify Putin.

About two months ago, in November, as part of the efforts to appease Russia and following the extradition of a Russian hacker from Israel to the United States, Israel established an intergovernmental Israel-Russia committee headed by Minister Zeev Elkin in order to diffuse the tension between the countries and discuss Russia’s various demands, most of them in the civil sphere. So, for instance, the Russians demanded that Israel stop the extra scrutiny of Russian tourists entering Israel and the deportation of some on suspicion of being labor migrants. Al-Monitor has learned that the Elkin Committee asked the Immigration Authority to refrain from sweeping deportations and to justify every deportation with real evidence.

Another Russian demand has to do with property owned by Russian churches in Jerusalem, such as the Alexander Nevsky Church next to the Church of the Holy Sepulcher in Jerusalem. Yitzhak Brudny of Hebrew University, an expert in the history of the Soviet Union, explained in a conversation with Al-Monitor that the roots of the conflict date back to the 19th century, when Russia, by means of the Russian Orthodox Church, acquired land in Jerusalem. But the laws of property registration of the Ottoman Empire that then ruled the Land of Israel, the Communist Revolution and a schism in the Russian Church have complicated the issue of its property registration. Now Israel is working in legal avenues to help the Russians in this matter.

The Israeli gestures could have interesting ramifications beyond the release of Issachar. The Russian appeal to Israel in this matter in itself is a diplomatic achievement, since it reflects a de facto recognition of Israeli control over East Jerusalem. Thus, Putin has broken with a longstanding Russian policy to refrain from such recognition. No less important is the issue of the government’s involvement in conflicts related to holy sites in Jerusalem. Israel tries not to intervene in the many conflicts between the various churches and denominations in the city, and the guiding principle has been to maintain the status quo. The intervention in a conflict between two Russian ecclesiastical bodies regarding sacred real estate could open a door to additional demands from other countries and churches that Israel intervene in their favor in conflicts with other denominations.

On another matter, Israel agreed to look into the possibility of changing the route of the light rail being built in south Jerusalem, very close to the land of the Russian Church in Ein Karem neighborhood. It seems that there will not be a real change to the route, but modifications will be made to reduce the noise and air pollution feared by the church officials who occupy the church, considered one of the most beautiful in Jerusalem.

Another issue raised by the Russians is the reacquisition of buildings and land in the area of the Russian Compound in central Jerusalem, land that Israel bought from the Soviet Union in 1964. Here the Israeli reply was negative but polite, since it would require the authorization of the Knesset to sell land to a foreign country. A request that was apparently met was the leveling of the status of the new Russian hotel built in the Sergei's Courtyard in central Jerusalem to the status of the Vatican guest houses in Jerusalem. The significance is mostly financial, that is, a significant discount in property taxes to be paid by the hotel, which is owned by the Russian government.

An Israeli diplomatic source told Al-Monitor that the release of Issachar was obtained at not too high a civil price. According to him, the importance of the move was in the realization of effective contacts with the Putin government and the strengthening of a relationship that is very important to Israeli security activity in the region.