The unveiling of President Donald Trump’s 'deal of the century' offers Prime Minister Benjamin Netanyahu an unprecedented opportunity to secure right-wing votes by announcing that he will annex West Bank settlements. 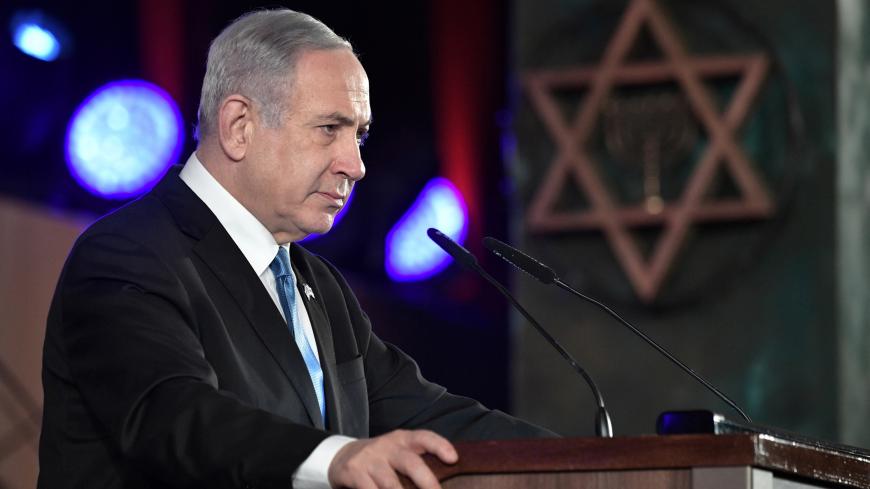 Israeli Prime Minister Benjamin Netanyahu delivers a speech during a ceremony inaugurating a memorial commemorating the citizens and defenders of Leningrad under siege during World War II, Jerusalem, Jan. 23, 2020. - Sputnik/Alexei Nikolskyi/Kremlin via REUTERS

When Prime Minister Benjamin Netanyahu withdrew his request for immunity on Jan. 28, he already knew that he had lost the battle and that he would not be getting immunity. Later that day, at 7:00 p.m. Israeli time, Netanyahu stood beside President Donald Trump at the White House and laid out his legacy for posterity. With that, he reshuffled the deck for the next round of Israeli elections in March.

Trump's plan for resolving the conflict with the Palestinians — which Netanyahu helped shape over the last three years and is commonly referred to the “deal of the century” — has made history. Not only does it shatter the paradigm of the Oslo Accords, the diplomatic basis over the past three decades for everything done in this regard by successive Israeli governments and the United States. The plan also redraws Israel’s borders for generations to come, if only de facto and unilaterally.

Trump gave Netanyahu the green light to immediately annex territory, and the prime minister doesn’t plan on wasting time doing so. Netanyahu intended to bring his plan for the first stage in the annexation of the Jordan Valley and all the settlements to the government for its approval as early as Feb. 2. Tourism Minister Yariv Levin said on Jan. 29, however, that discussion in the Cabinet would be delayed for technical reasons. In any case, this is such an inconceivable development that its significance has yet to be fully understood. It could very well lead to a fresh outbreak of violence.

The event occurred on the very day that Netanyahu became the first prime minister in Israel’s history to be charged with bribery while in office. The indictment against him was filed with the Jerusalem District Court soon after he gave up on his quest for immunity. The event at the White House was so surprising and monumental that it pushed the indictment to the farthest reaches of the day’s news.

The events in Washington effectively reset the Israeli election campaign. Blue and White leaders never considered that the Trump plan would have immediate implications. As a result, they were caught without an immediate campaign response.

Chairman Benny Gantz had a personal meeting with Trump on Jan. 27 and was presented with the plan. Nevertheless, senior Blue and White members claim that Gantz did not have as much as an inkling that it included the immediate annexation of large swathes of the West Bank. They believe that Netanyahu only managed to get the green light from Trump sometime on Jan. 28 before the announcement. Until then, Blue and White had been planning to turn the debate over Netanyahu’s immunity into the main issue of their campaign, thinking it would be around until election day. They had planned their opening salvo for the morning of Jan. 28, when the Knesset was scheduled to begin the debate that Netanyahu had tried so hard to prevent.

Right before the planned debate, Netanyahu withdrew his request for Knesset immunity and retook control of the agenda. From that moment on, all eyes were on the White House, with the question of immunity pushed to the margins. Not even the unprecedented court filing of an indictment against an incumbent prime minister could distract attention from the White House.

Blue and White is now caught in an intricate trap. The Trump plan and the diplomatic maneuvers now being advanced by Netanyahu will have dramatic implications for Israel’s security and the broader Middle East. Faced with that, Gantz and his fellow party members will have a hard time focusing the public's attention on the prime minister’s legal issues and an even harder time attracting new voters from the right after Netanyahu delivered the plan of their dreams: not one settler will be evacuated from his or her home. Even if a new US president is elected in November, the facts will already be established on the ground, and it will be impossible for anyone to roll back Israeli sovereignty over the territory.

Although surprised by the gravity of the White House event, Blue and White issued a statement positive toward Trump, calling him “a true friend to Israel, to the Jewish people,” and his plan. “It was an important and historic speech by President Trump,” the statement read. “It aligns completely with the diplomatic and security principles of the Blue and White party.” Given this situation, it is highly doubtful that Blue and White will vote against annexation of the settlements if the issue is be brought before the Knesset. The same is true of Yisrael Beitenu, led by Avigdor Liberman, who released his own statement congratulating Trump. In it, he also asserted, “Part of his peace plan adopted the plan that I released in 2004, with its calls for a swap of territory and populations.”

Blue and White will try to return Netanyahu’s legal problems to the top of the national agenda, claiming that he cannot lead the country while standing trial on criminal charges. The problem is that recent developments will make that difficult for them. Instead, it is likely that they will have to reconsider and recalibrate their strategy.

Meanwhile, Netanyahu will now operate on two tracks. On one, he will lead the Likud’s campaign, which will once again be fashioned in his image in the hope that his right-wing-ultra-Orthodox bloc will win the 61 seats needed to form a government. Netanyahu will likely continue enjoying the absolute loyalty of the bloc even if he doesn’t win 61 seats. Should Netanyahu fall short, Gantz will find yet again that he cannot form a government either. He made his situation worse with statements in support of annexing the Jordan Valley, which means he would have a hard time convincing the Arab's Joint List to support him. Netanyahu believes that given all this, the option of forming a unity government gains in relevance. The Trump plan could serve as the ground for its creation.

On the other track, Netanyahu will work hard to shape his legacy as a historic one for generations to come. He is well aware of his complicated legal situation and knows that the Supreme Court could disqualify him from forming a new government, thereby bringing an end to his political career. That is why he must leave his mark on history. He will do that in the days and weeks ahead of the March 2 election.

People used to say that even after Netanyahu's many years in government, he had no major achievement to mark his time in office. As the son of a historian, Benzion Netanyahu, he always had his eye on some sort of Churchillian, Ben-Gurion-like legacy and thought of himself in terms of greatness. It is no coincidence that in his speech at the White House, he remarked, “This is a historic day. And it recalls another historic day. We remember May 14, 1948, because on that day, President Truman became the first world leader to recognize the State of Israel after our first Prime Minister, David Ben-Gurion, declared our independence. … Mr. President, I believe that down the decades — and perhaps down the centuries — we will also remember January 28, 2020, because on this day, you became the first world leader to recognize Israel’s sovereignty over areas in Judea and Samaria that are vital to our security and central to our heritage.”

History will yet judge Netanyahu. Given the current situation, the fact that he is a prime minister who has been charged with bribery will come knocking at his door in one way or another.