Over three months since anti-government protests began in Iraq, attention has shifted to geopolitical fears of regional war. 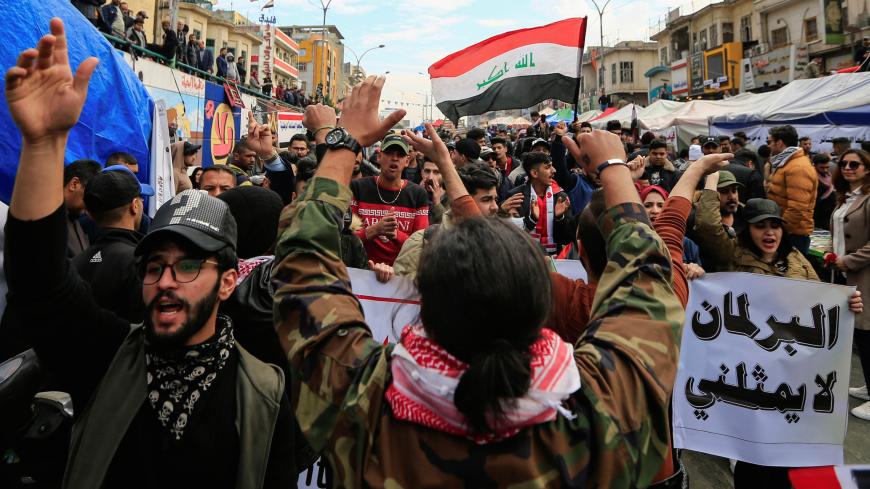 BAGHDAD — Blood is still on the streets near the Ahrar Bridge in Baghdad. A Red Crescent worker explained that just two days before, Iraqi security forces shot a teen, just 16 or 17 years old, who was participating in the protests. Further down the street, a group of men said that the teen's death had been the first in several weeks since the protests began.

Protesters on social media aimed to get 1 million Iraqis to take to the streets Jan. 10, in a bid to prevent their demands from being forgotten. Slogans such as “the parliament does not represent us” and “take your wars out of Iraq” have largely supplanted earlier ones against corruption.

The daytime atmosphere in Tahrir Square was festive, as it has been for months, with free food and the mingling of the sexes, along with dancing, music and chants of "no to Iran, no to the US." Nights have been freezing cold in recent weeks, and protesters spending the night were fewer on this night than in previous months.

Ten minutes down the road, dozens of teenage males, mostly from Sadr City, climbed blast walls blocking a street near the Ahrar Bridge, still occupied by armed forces. The teens broke rocks and threw them at the forces in the early afternoon.

Nearby, a Red Crescent ambulance waited. After dark it will leave to prevent any damage, a member of the medical staff told Al-Monitor. At that point, the ubiquitous tuk-tuks will be used to transport any injured to medical stations farther down the road.

​Middle-aged men watched, warily, from a safer location down the street.

A gangly 17-year-old said he had stopped going to school over two months ago after a friend of his was killed in the protests. “We want justice and jobs, a life,” he said.

A friend of his approached and anxiously asked in the teen who was shot two days prior had survived. He said he had been a few yards away when the guy was shot, and that he didn't know whether he had survived.

Over 500 have been killed and thousands injured in the protests since Oct.1, according to official counts by human rights organizations. The vast majority were young men. Yet many claim these figures are far too low.

This past week, attention has shifted from the protests after the United States assassinated Qasem Soleimani and Abu Mahdi al-Muhandis Jan. 3 in a drone strike. Many saw the two towering pro-Iran figures as heroes, yet others feared and loathed them.

Iran responded to the killing by launching 22 missiles at military bases in the Sunni province of Anbar and the Kurdistan Region capital of Erbil, where support for US involvement in Iraq is stronger. No casualties were reported.

Iraqis decried the US drone strike as a violation of their sovereignty, but there was no outcry about the Iranian bombing of the bases, even though the bases were Iraqi and the foreign troops there at the government's request.

The Iraqi parliament passed a resolution to require the government to ask foreign troops to leave. Yet a parliamentary quorum was barely reached, and even then by almost exclusively Shiite parliamentarians. Leaders of armed groups threatened that anyone not attending the parliamentary session would be considered a traitor.

At the beginning of the protests in October, when security forces and other armed groups killed many protesters, the Iraqi government had imposed a near-total internet blackout for weeks.

Now that the internet is back on, both sides have decried “biased” media coverage.

Various factions of the Popular Mobilization Units (PMU), which were incorporated into the Iraqi government, vowed revenge for their "martyrs," meaning Soleimani and Muhandis. Several of these PMU have been accused of killing protesters. The PMU accuse the United States and Israel of being the puppet masters of the Iraqi protests, stating that they are trying to destroy the Shiite community and the country.

The night before the nationwide “million-man protest,” which fell short of those numbers, a statement issued by “your brothers in Tahrir Square” said the goal of the protests still remained early elections, a new prime minister, a departure from divisive political debates and an overhaul of “what has been sabotaged by corrupt parties.”

The Jan. 9 statement accused media outlets of engaging in propaganda for foreign governments.

Videos circulating on pro-Iranian social media insinuated that the US government was paying certain Iraqi media figures, like Steven Nabil from al-Hurra and TV satire star Ahmad al-Basheer, who have openly supported the protests, to achieve its ends in Iraq.

A statement from Muqtada al-Sadr, meanwhile, warned against chants, banners and leaflets that call for an end to political parties, religious leaders and militias. Sadr’s statement said that would be the "beginning of the end to the revolution" and a departure from the "right path."

In poverty-stricken Sadr City in early October, Al-Monitor found that protesters had initially focused on employment, an end to poverty, "justice for our martyrs" and "a future." Many of those killed in the early days of the protests were from the area.

Those within the more educated classes have since taken the lead in drawing up protesters’ demands, but all seem fed up with the political class, and most want foreign interference to end.

In the southern provinces, Al-Monitor found that protesters were terrified of what they called "the parties."

Some later identified these parties as Asaib Ahl al-Haq, led by Qais al-Khazali, who was recently put on the US terrorist list, and the Badr Organization, led by Hadi al-Amiri, whom many believe will soon take control of the PMU.

Armed groups in recent years have often been linked to Iraqi political parties. One parliamentarian told Al-Monitor last month that incorporating armed groups into politics is "necessary to get them to stop using their guns and keep them busy."

Many Iraqis now seem to have no conception of political parties that are not linked to armed groups.

It's unclear whether fresh elections and the protesters' other demands will reduce corruption, unemployment and poverty. Many taking part in Friday’s demonstrations seem to have shifted their attention, for the moment, to declaring “no” to both the United States and Iran.