Cairo seeks support to keep Turkish troops out of Libya 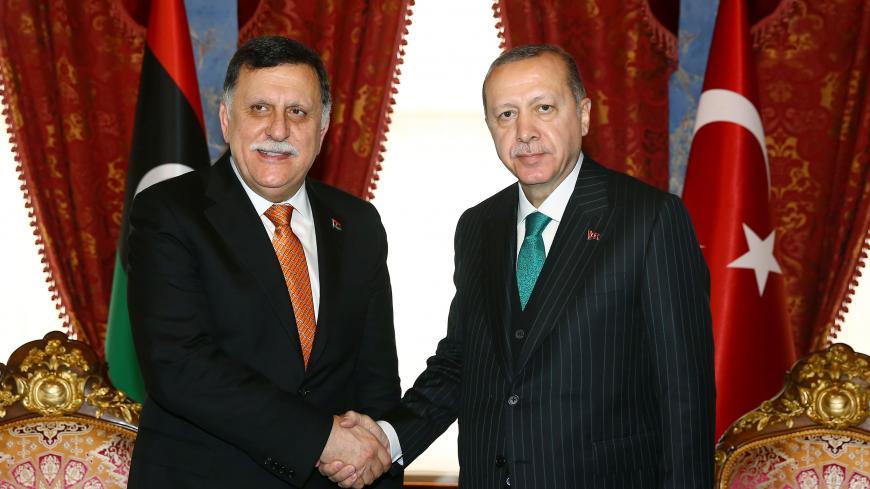 CAIRO — Turkey’s parliament passed a bill Jan. 2 to deploy troops to Libya in support of the Government of National Accord (GNA) in Tripoli, headed by Fayez al-Sarraj, in the battle against the Libyan National Army (LNA), led by Gen. Khalifa Hifter.

Egypt and many other countries, including the United States, reacted negatively.

In an interview with CNN Turk on Jan.5, Turkish President Erdogan announced that Turkish soldiers will gradually start heading to Libya.

In a Jan. 2 statement, Egypt's Foreign Ministry condemned the Turkish parliament’s decision and called on the international community to “handle its responsibilities immediately facing this development.”

The Egyptian National Security Council convened the same day and passed “a series of measures aimed at facing the threats to Egyptian national security as a result of the Turkish military intervention in Libya,” according to a statement. The measures are yet to be revealed.

Of note, the GNA and Turkey had signed Nov. 28 a delimitation of naval jurisdictions agreement and a military and security coordination agreement, both of which irritated Egypt.

Cairo had embarked in December 2019 on diplomatic action to mobilize the Arab and international community against the expected Turkish military intervention in Tripoli in northwest Libya. After Egypt called for an Arab League emergency meeting, the league announced Dec. 31 it would reject “any kind” of foreign intervention in Libyan affairs and underlined the need to halt the military conflict.

Egyptian President Abdel Fattah al-Sisi had made several calls before that meeting, including to French President Emmanuel Macron. The two discussed the risks of military escalation in Libya and called on international actors and Libyans to show the highest levels of self-restraint.

On Dec. 26, Sisi called US President Donald Trump and explained “the importance of the role of the LNA in fighting terrorism and curbing the activity of armed militias and organizations that threaten regional security.” According to a statement by the Egyptian presidency, Sisi also called for stopping “illegitimate” foreign intervention in Libyan affairs.

A day later, Sisi and Russian President Vladimir Putin agreed to intensify their joint efforts to settle the Libyan crisis.

An Egyptian diplomat told Al-Monitor on condition of anonymity, “Egypt’s recent diplomatic action aims at uniting the international stance vis-a-vis Turkey’s intention to send military forces to Tripoli. Such a step would flare up the situation in Libya and directly threaten Egypt’s national security, which is linked to Libyan developments.”

“Egypt wants the key international players to realize the threat that Turkey’s escalation in Libya poses to peace and security in the Middle East and North Africa region," he said.

Tarek Fahmy, a Cairo University political science professor, told Al-Monitor, “Egypt’s latest step aims at preventing the situation in neighboring Libya from blowing up and at imposing stability that would diplomatically help solve the crisis and reshuffle the Libyan state institutions.”

Fahmy said Egypt is trying to deter Turkey's quick escalation. "Turkey has taken steps to impose a fait accompli in Libya and has capitalized on the US slackening and the loopholes in the European stance on the situation in Libya," he added.

A Dec. 27 headline on Germany's Deutsche Welle website said Europe's role regarding Libya has gone "from a shy player to a hesitant spectator.”

He added that Turkish President Recep Tayyip Erdogan “is facing huge challenges for wanting to send troops to Libya."

"He needs to cooperate with Russia, which backs Hifter, on Idlib [in Syria], where the Russian shelling is preventing Syrian refugees from leaving Turkey and returning home. Also, the United States is expressing concerns over a [Turkish] military intervention in Libya and a possible deterioration of the situation. Meanwhile, Libya’s neighboring countries like Tunisia and Algeria are worried about the deployment of military forces on their borders,” Saeed added.

A summit had already been scheduled for next week in Cairo among Egypt, Cyprus, Greece and France. The parties will discuss the situation in Libya and how to reduce tensions in the Middle East, Kyriakos Kousios, Cypriot government spokesperson, told Cyprus News Agency Dec. 24.

Abdul Sattar Hteita, a journalist who covers Libyan affairs at Al-Sharq Al-Awsat newspaper, told Al-Monitor, “Egypt is focusing on a team effort, be it among Arabs, Europeans or key players like the US, Russia and France and states with interests in the Mediterranean like Greece, Cyprus and Italy. Most of these countries expressly objected to Turkish action and said they would not allow Ankara to put its hand on the Mediterranean Sea.”

He added, “The escalation in Libya not only threatens neighboring countries, but also the EU, the Mediterranean Sea and international security in general."

Some observers believe Egypt could respond to Turkey in a single-handed military operation, but Hteita said, "Egypt does not believe in this line of politics, as [Cairo] relies on cooperation and consultations with its allies and ensures the commitment of major players to their responsibilities.”

On the odds of Egypt successfully deterring Turkey, Al-Ahram Center's Saeed noted, “This is not a football game. It is a series of consecutive operations, and how things will unfold remains to be seen.”