President Abdel Fattah al-Sisi's warning of possible Egyptian military intervention in Libya drew mixed reactions both at home and from parties to the conflict. 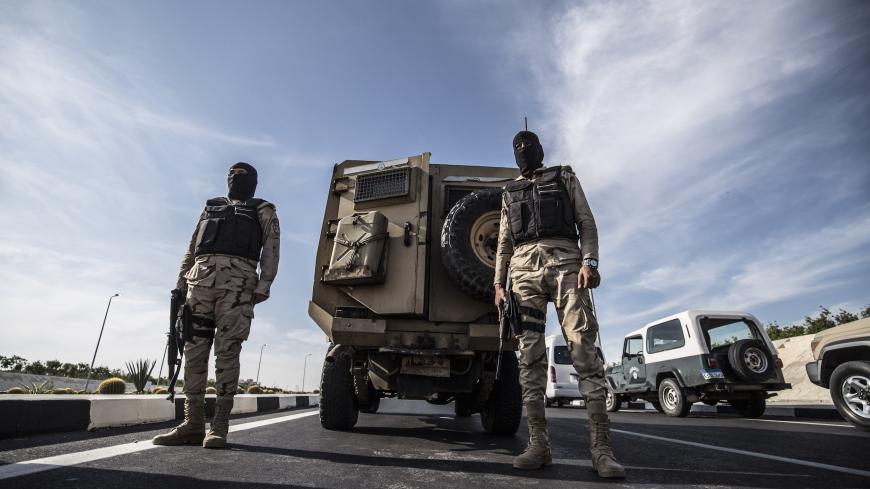 Egyptian soldiers stand guard during an organized tour for diplomats to mark the 150th anniversary of the inauguration of the Suez Canal, in the northeastern city of Ismailia on Nov. 17, 2019. - KHALED DESOUKI/AFP via Getty Images

President Abdel Fattah al-Sisi's warning that Egypt could intervene militarily in neighboring Libya if Turkish-backed government forces were to advance on the eastern Libyan city of Sirte has drawn mixed reactions from the parties to the conflict in Libya.

The Libyan Parliament affiliated with eastern commander Khalifa Hifter welcomed Sisi's remarks. According to a statement released by the House of Representatives on June 21, speaker of the eastern-based parliament Aguila Saleh had called on Cairo in January “to assist the Libyan armed forces in their war against terrorism and to thwart the foreign invasion.”

The UN-recognized Government of National Accord (GNA) in Tripoli, meanwhile, called Sisi's warning a “declaration of war” and an “attack on its sovereignty.” It further stated that the GNA is “the sole legitimate representative of the Libyan state.”

“Any direct intervention from the Egyptian state has now acquired international legitimacy,” Sisi said June 20, citing the threat posed by "terrorist militias" to Libya's security and stability in reference to the more than 2,000 fighters from the Free Syrian Army (FSA) deployed by Turkey to support the GNA against Hifter. Sisi stressed the necessity of protecting Egypt's porous western border against infiltration by armed militants from Libya. His remarks came in an address to Egyptian troops at the Sidi Barrani air force base in Matrouh, a western governorate on the border with Libya.

Thanks to Turkey's support, forces loyal to the GNA have made significant military gains in recent weeks, pushing back Hifter's forces and thwarting a 14-month offensive by the LNA against the Libyan capital Tripoli. The Turkish-backed forces of the GNA have meanwhile been threatening to advance on the strategic city of Sirte and al-Jufra air base, but Sisi's warning that “Sirte and Jufra are a red line” appears to have foiled those plans, halting the GNA forces’ march eastward — at least temporarily.

Sisi's warning came just days after 23 Egyptian laborers allegedly detained and tortured by forces allied with the GNA were repatriated to Egypt. They were shown on a number of Egyptian satellite channels arriving in Matrouh, some draped in the Egyptian flag. Earlier, a video had circulated on Egyptian social media purportedly showing the workers facing abuse and being forced to stand on one leg with their hands in the air.

Sisi's comments were received at home with a variety of responses including surprise, skepticism, dismay and a great deal of patriotic sentiment, as was evident from the widely circulated images of the Egyptian flag and the “Long live Egypt” slogan on social media.

Some saw the warning as a distraction from government failures such as the response to the coronavirus pandemic and the deadlock in talks with Ethiopia over the Great Renaissance  Dam Project.

Skeptics like Hassan Nafaa, a professor of political science at Cairo University, dismissed Sisi's warning, arguing that it is “highly unlikely” that Egypt would enter a direct war in Libya.

“Cairo, however, will not tolerate an eastward expansion of GNA forces, as it would consider this a victory for Turkey, perceived by Egypt as an 'enemy state' owing to Turkey's support for the Muslim Brotherhood,” Nafaa told Al-Monitor. Turkey offers a safe haven to exiled leaders and members of the Islamic opposition group, considered a terrorist organization by Egypt since late 2013.

Nafaa went on, “President Sisi has made it clear that he rejects Turkey's expansionist goals and has warned he will stop at nothing to deter Turkey from gaining control over Libya. If the GNA repeats the same mistake made earlier by Hifter when he had opted for a military solution rather than a political settlement of the crisis, then we can expect to see Cairo extending further support to Hifter's forces, equipping and arming them — and the Libyan eastern tribesmen fighting alongside the LNA — with sophisticated weapons.” Sisi and Gulf allies the UAE and Saudi Arabia have been supporting Hifter all along but according to Nafaa, that support “will no longer be covert nor discreet.”

Nafaa recalled Hifter's refusal to sign a January cease-fire agreement brokered by Turkey and Russia in Moscow and the repeated violations by LNA forces of another deal struck in Berlin a few weeks later. At the Berlin international conference on Libya in February, global powers and regional actors pledged their support for a cease-fire and an arms embargo in Libya. They also vowed to throw their weight behind the UN-facilitated political process.

“All promises were thrown to the wind by Hifter. My fear is that the pro-GNA forces may choose to ignore the calls for a cease-fire, prompting a further escalation of the crisis and more bloody confrontations,” he added.

Other analysts like Maj. Gen. Samir Farag, senior strategist at the Security and Defense Advisory Board of Egypt, perceived Sisi's warning as “very serious.” “Egyptian military intervention in Libya is imminent if pro-GNA forces fail to respect the cease-fire,” he told Al-Monitor.

“President Sisi has thrown a stone into still waters,” Farag said, adding, “His remarks have prompted similar calls from regional and global powers, including from the Pentagon and NATO (which back the government in Tripoli), for respect of the arms embargo and the cease-fire announced by Cairo earlier this month.”

On June 6, Sisi called for foreign fighters to exit Libya and for peace talks to be held in Geneva as part of an initiative to end the nearly decade-long civil war. Cairo's peace plan won approval from Hifter, who was still licking his wounds after his militia had been forced to retreat from Tripoli but was rejected by the GNA, which continued its onslaught against LNA forces, inching closer to Sirte.

An emergency Arab League meeting held on June 23 produced a formal rejection of “all illegitimate foreign intervention” in Libya and echoed Sisi's call for the withdrawal of all foreign forces. The virtual meeting, held at Egypt's behest, also called for peace talks to end the conflict in the war-ravaged country.

Addressing the Arab League ministerial meeting by video conference, Egyptian Foreign Minister Sameh Shoukry said Egypt will not hesitate to take every possible measure to prevent Libya from falling under the control of terrorist groups. Citing the initiative announced by Sisi, he added that Cairo was involved in various international initiatives and was keen to achieve a political resolution to the crisis.

“It is clear that Egypt would prefer to exhaust all diplomatic channels and if possible avert military intervention. The ball is in the court of the GNA; its actions will decide which path Egypt will take," Farag told Al-Monitor.

The risk of terrorist militias from northern Syria crossing the border from Libya into Egypt is not the only cause for concern. The possibility of Turkey gaining a foothold in eastern Libya close to Egypt's western border and setting up military bases is another reason for Cairo's alarm.

But Farag pointed to another, even greater bone of contention: a maritime deal signed between Turkey and the GNA in November 2019 that gives Turkey rights to natural resources in the disputed zone demarcated in the agreement. Turkey has already announced plans to begin drilling for gas and oil in the coming months with Tripoli's blessing, much to the chagrin of Egypt and other Mediterranean states (namely Cyprus, Greece and Israel), which fear the deal could hinder their plan to export natural gas to Europe through a pipeline or on LNG vessels.