Could Turkey bar US military from Incirlik air base?

Faced with the resurging threat of sanctions in the US Congress, Ankara has brandished another trump card, warning that the US military could lose access to two key bases in Turkey. 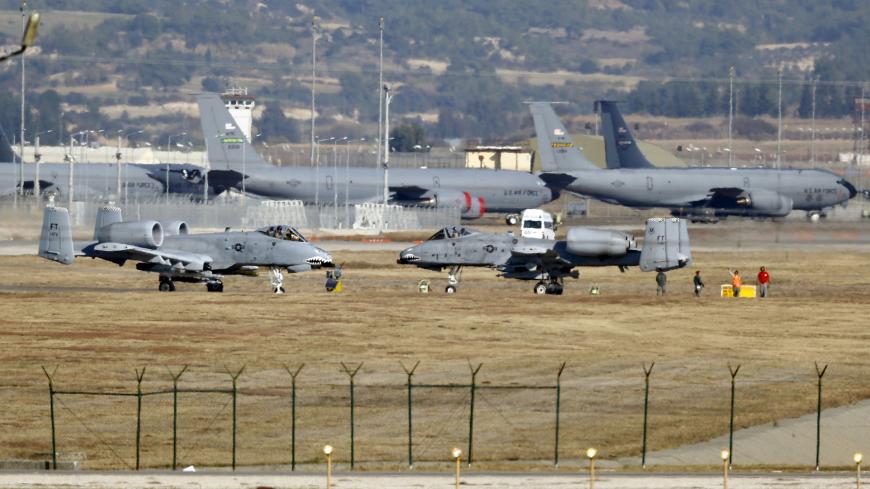 US Air Force A-10 Thunderbolt II fighter jets (foreground) are pictured at Incirlik air base in the southern city of Adana, Turkey, Dec. 11, 2015. - REUTERS/Umit Bektas/Files

In a television interview Dec. 11, Foreign Minister Mevlut Cavusoglu warned that Turkey could bar the United States from using two key bases in the country in response to possible sanctions over Ankara’s purchase of Russian missiles and its military campaign in northeast Syria. It was not the first time Ankara has made such warnings, but with the prospect of sanctions looming closer, its tone seems to be toughening.

In the interview with the pro-government A Haber channel, Cavusoglu was asked how Ankara would respond to eventual sanctions by the US Congress and whether the status of the US base in Incirlik, not far from the Syrian border, could be reviewed. The minister responded that the status of “both Incirlik and Kurecik” could be reviewed, referring also to a NATO base in the eastern province of Malatya that hosts an early-warning radar station as part of NATO’s missile defense system.

He added, “I don’t want to comment on bad-case scenarios, based on assumptions. It doesn’t end with a decision by Congress. The decision of the administration will matter as well.” Referring to the Countering America’s Adversaries Through Sanctions Act (CAATSA), he added, “There are 12 articles in CAATSA. Which one will the administration choose? If a decision against Turkey is passed, what authority will the Trump administration have on implementation? We need to consider all these. If we have to eventually consider the worst-case scenario, we will consider the demands of our people as well and then make a decision. All alternatives will be considered.”

The minister’s words immediately made the headlines, but could Ankara indeed dare to close down the Incirlik base and the Kurecik radar?

Back in 2017, Cavusoglu had warned that Turkey might consider shutting the Incirlik base because it was “annoyed” with “the attitude of some NATO members” vis-a-vis the Kurdistan Workers Party (PKK), the insurgent group considered a terrorist organization by Ankara and much of the international community. This past July, he alluded again to using the Incirlik card in the event of sanctions under CAATSA.

Cavusoglu has stood out as a tough-talking figure in recent months, seeming to play the bad cop in ties with the United States with Defense Minister Hulusi Akar playing the good cop.

Given the latest developments in Washington, bringing up Incirlik and Kurecik is aimed at boosting Ankara’s bargaining power. Turkish-US tensions peaked in October after Ankara launched Operation Peace Spring against the PKK-affiliated People’s Protection Units in northeast Syria, prompting a slew of sanction bills in Congress. Yet US President Donald Trump maintained his lenient attitude toward Turkey and tensions seemed to ease up, especially after President Recep Tayyip Erdogan’s Nov. 13 visit to the White House. The sanction drive in Congress, however, is gathering steam anew.

The Senate Foreign Relations Committee advanced Dec. 11 a bill designed to sanction Turkey’s leaders, energy industry and financial system involved in the military campaign in Syria. The legislation contains also a provision to enforce CAATSA, which could freeze Turkish assets, restrict visas and limit access to credit in response to Ankara’s purchase of the Russian S-400 air defense systems.

Judging by Cavusoglu’s statement, Ankara appears to still believe that Trump can thwart the sanctions. So it is trying to pile pressure directly on him to push him to avert the new move in the Senate, where it is now up to Majority Leader Mitch McConnell to decide whether to bring the bill to a full vote. McConnell, a Trump ally, has been reluctant to sanction Turkey, cautioning that such measures could further drive a NATO ally “into the arms of the Russians.”

The Incirlik air base became operational in 1955 as Turkey sought to advance ties with NATO and the Western security bloc. It is essentially a Turkish base, with part of it allocated to the use of the US military. The facility is one of the 13 largest bases available to the US military across the world. Its most recent terms of use are set in the Defense and Economic Cooperation Agreement, which Turkey and the United States signed in March 1980. Under the agreement, all bases and facilities it covers — including Incirlik — are allocated to the United States as part of the principles in the NATO Treaty and in line with NATO’s defense plans.

Under the agreement, the United States recognizes all Turkish sovereign rights over Incirlik and pledges to not deploy warplanes for operations other than NATO missions. The Turkish air force is responsible for all air traffic and control services at the base. Its 10th Tanker Base Command, headed by a general, is stationed at Incirlik to carry out that mission.

Ever since its inauguration, the base has been the subject of political controversies and the target of domestic opponents of military partnership with the United States. In fact, Ankara has barred the United States from using the base before. The move came in July 1975 in retaliation to the arms embargo the United States slapped on Turkey over its military intervention in Cyprus the previous year. The base was reopened after Congress lifted the embargo and reinstated military assistance for Turkey in September 1978.

According to a public opinion poll taken in mid-November, 30% of the Turkish public believes the United States should be barred from using Incirlik if bilateral ties deteriorate further, while 64% are in favor of an outright ban. Also, the poll suggests that Turks have little confidence that Trump could help ameliorate bilateral ties. More than 84% believe Trump should not be trusted, with only 6% asserting that the US president warrants trust. In other words, the Turkish public is already fine with shuttering the base.

And Ankara is clearly becoming more vocal in wielding its trump cards on the Incirlik base and the Kurecik radar, grating both the United States and NATO. How far it could go in this bargaining game is hard to predict, but one thing is certain: Ankara cannot afford to close the Incirlik base unless it decides it can afford to quit NATO.

Is Ankara’s current rift with Washington and the Western security bloc as grave as it was in 1975? The crisis does not seem to be there yet, but it might precipitate an ultimate rupture if Washington comes up with a powerful sanctions package that targets Erdogan and other officials directly and seriously bruises the Turkish economy, with Trump failing to avert the move or sitting back.

For the United States, the Incirlik base is of crucial importance, providing major cost and time advantages in operations in the Middle East owing to its geographical location and well-established structure. Still, the base is not indispensable, as evidenced by the October air raid in Syria that led to the death of Islamic State leader Abu Bakr al-Baghdadi, in which US forces used a base in Erbil, Iraq, rather than the much closer Incirlik. Besides northern Iraq, Greece and northern Syria also offer alternatives to Incirlik. Given Washington’s growing strategic rapprochement with Athens, the US bases in Greece, in particular, could become more active if Ankara boots the US military out of Incirlik.

The reactions of two figures will be curious to watch after Cavusoglu’s warning. The first is Turkey’s “good cop” Akar, who has been playing some sort of a mediator’s role in ties with Washington. Any statements by Akar backing up Cavusoglu would be an omen that things are getting serious.

The other person is Trump, on whom Ankara has pinned a lot of hope. If Trump proves incapable of dispelling the thunderclouds gathering in Washington anew or chooses not to make an effort, Turkish-US ties will be probably bracing for a perfect storm similar to the one in the 1970s.