Turkish and Saudi leaders look to Trump to prevent relations with the United States from going bad to worse. 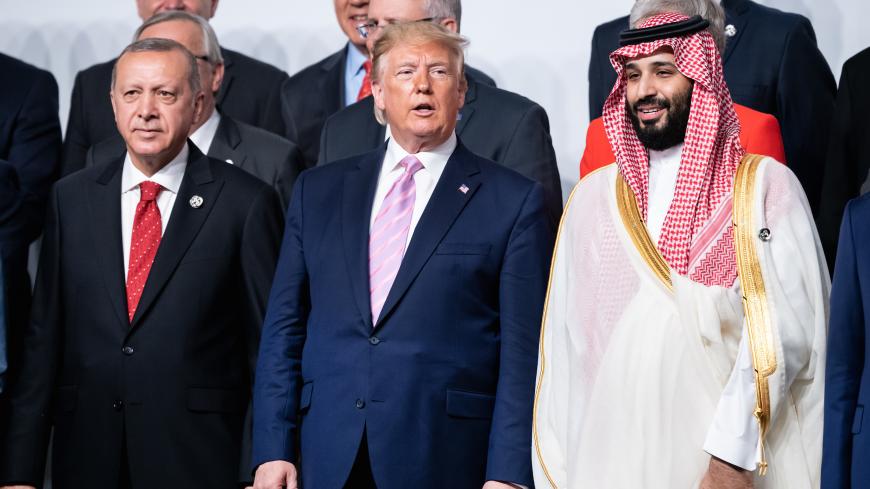 Turkish President Recep Tayyip Erdogan (L-R), US President Donald Trump and Saudi Crown Prince Mohammed bin Salman stand side by side in the group picture at the start of the G-20 summit. - Bernd von Jutrczenka/picture alliance via Getty Images

The Trump administration scrambled this week to soften the impact of bipartisan legislation that would sanction Turkey and Saudi Arabia.

The White House is the last defense against both sanctions and even more friction in bilateral relations with both countries. Long considered pillars of US national security policy in the region, the Congressional consensus on Turkey and the kingdom has frayed as a result of the war in Yemen, the murder of journalist Jamal Khashoggi, the Turkish attack on the United States' Kurdish partners in Syria, and Ankara’s purchase of the Russian S-400 missile defense systems.

No one questions the need for a US response on all scores, and US President Donald Trump himself imposed sanctions on Turkey for its invasion of Syria (which he lifted after Turkey declared a ceasefire). Nonetheless, both countries remain vital partners in combating terrorists, confronting Iran and ending the wars in Yemen and Syria.

Congress passed a resolution this week recognizing the Ottoman massacres of Armenians over 100 years ago as genocide. For most, the resolution is simply an overdue statement of historical fact, and the resolution carries no sanctions or penalties. For the Turkish government, however, the resolution is "disgraceful" and "damaging" for US-Turkey ties.

And it gets worse for Ankara. The Senate Foreign Relations Committee passed a bill this week that sanctions Turkey for its military offensive against the Syrian Kurds and its purchase of the Russian S-400 missile defense system. Committee Chairman James Risch, R-Idaho, modified earlier sanctions bills to give the president more leeway with regard to sanctions. The bill would ban Turkey from acquiring both the F-35 and F-16 aircraft unless it relinquishes the Russian S-400 system, as Bryant Harris reports.

In response, Turkish Foreign Minister Mevlut Cavusoglu threatened this week to review the status of both the US Incirlik air base and the Kurecik NATO base used for missile defense.

This is not the first time Turkey has put the status of Incirlik in play in response to its frustration with US policy.

“Given the latest developments in Washington, bringing up Incirlik and Kurecik is aimed at boosting Ankara’s bargaining power,” explains Metin Gurcan. “Ankara is clearly becoming more vocal in wielding its trump cards on the Incirlik base and the Kurecik radar, grating both the United States and NATO. How far it could go in this bargaining game is hard to predict, but one thing is certain: Ankara cannot afford to close the Incirlik base unless it decides it can afford to quit NATO.”

Turkish President Recep Tayyip Erdogan’s participation at the NATO summit this month turned into a muddle, reflecting the Turkish political divide on its role in NATO. Heading into the summit, Turkey threatened to hold up the alliance’s Baltic defense plan until it lists the Syrian Kurdish People’s Protection Units (YPG) as a terrorist organization. Nonetheless, Erdogan and his counterparts put the best face forward to find common ground despite the scratchiness over Ankara’s purchase of the Russian S-400.

“Erdogan’s government is now caught in the uneasy position of having to convince its support base that Turkey has clout in NATO with regard to its demands, while having to cope with the realities that govern its alliance membership, which clearly forced him to climb down in London,” writes Semih Idiz.​

Meanwhile Jared Kushner, President Trump’s son-in-law and senior adviser, intervened to walk back some punitive provisions on Saudi Arabia in a defense bill Trump is expected to sign next week.

“The White House successfully pushed Congress to remove language in the annual defense bill [the National Defense Authorization Act, or NDAA] that would have imposed concrete penalties on Saudi Arabia for the war in Yemen and the murder of Washington Post journalist Jamal Khashoggi,” Bryant Harris reports.

“While both amendments had some degree of bipartisan support, Democrats agreed to remove the substantive impact of each Saudi provision from the final version of the bill during negotiations with the Republican-held Senate,” continues Harris. “Al-Monitor has learned that Republican negotiators successfully fought to keep the Saudi provisions out of the final defense bill after the White House marked it as a red line.”

The removal of the Saudi provisions in the NDAA comes as the Pentagon reviews all US military foreign training programs following the murder of three American servicemen and wounding of eight others by a radicalized Saudi Air Force officer, Saeed Alshamrani at a US Air Force Foreign Military Sales training program at a naval base in Florida.

“The stand-down in operational training will only apply to Saudi students,” Jack Detsch reports, “but the Defense Department plans to establish new vetting policies as part of the dayslong review that will apply to all foreign military students who enter the United States.”

All this comes as the kingdom’s regional initiatives show signs of a turnaround. While Qatar Emir Sheikh Tamim bin Hamad Al Thani did not attend the Gulf Cooperation Council summit last week, Prime Minister Abdullah bin Nasser Al Khalifa Al Thani did, and, according to reports, was received with respect and held a positive meeting with King Salman. Resolution of the dispute with Qatar will take time, but the prime minister’s attendance at the summit, at the king’s initiative, may have been an icebreaker.

On Yemen, the kingdom is pressing for a diplomatic solution, including a new approach to Houthi groups, which Iran has backed. “The progress in Saudi-Houthi dialogue has come as Saudi Deputy Defense Minister Khalid bin Salman Al Saud, the former Saudi ambassador to the United States and brother of Crown Prince Mohammed bin Salman Al Saud, has taken the lead on the Yemen file, former diplomats and analysts told Al-Monitor,” Laura Rozen writes. “Bin Salman — often referred to by his initials KBS — traveled to Oman two weeks ago, where he met with Oman’s Sultan Qaboos, whose government has quietly tried to mediate between the Saudis and Iran, particularly on Yemen.”

Assistant Secretary of State Denise Natali, speaking at an Al-Monitor event earlier this month, said the Saudi Development and Reconstruction Program for Yemen “has had ‘very positive traction,’ citing contributions to stabilize the currency and allow the official Government of Yemen to pay salaries to government workers,” Detsch reports.

The dilemma of consequences in a region on fire

Erdogan and King Salman consider their personal connections with Trump as a lifeline to stave off the punitive actions of the Congress. Both leaders value their ties to the United States. But as we see, especially with Turkey, Russian President Vladimir Putin is always ready to step up. Unlike the United States, he is not burdened by human rights or much else in how he deals with the region.

The Middle East is, for lack of a better term, on fire. The wars in Syria and Yemen continue; Iraq and Lebanon are shaken by protests; the Islamic State and al-Qaeda and its inheritors are regrouping; and Iran, which is agitating in both Baghdad and Beirut, and which attacked Aramco facilities in the kingdom Sept. 14, is reportedly placing ballistic missiles in Iraq that would threaten US allies and interests in the region. You can’t champion the need for deepening alliances and place constraints on vital, if contentious, partners without some blowback for US national security. This is not an either/or argument, just an eyes-wide-open reminder.

Note: The Week in Review will be on leave next week, but back again before the end of the year.