How Rouhani and Trump almost reached a deal

While hopes have emerged as the result of a prisoner exchange between Iran and the United States, some analysts believe this won't lead to negotiations and a Trump-Rouhani meeting. 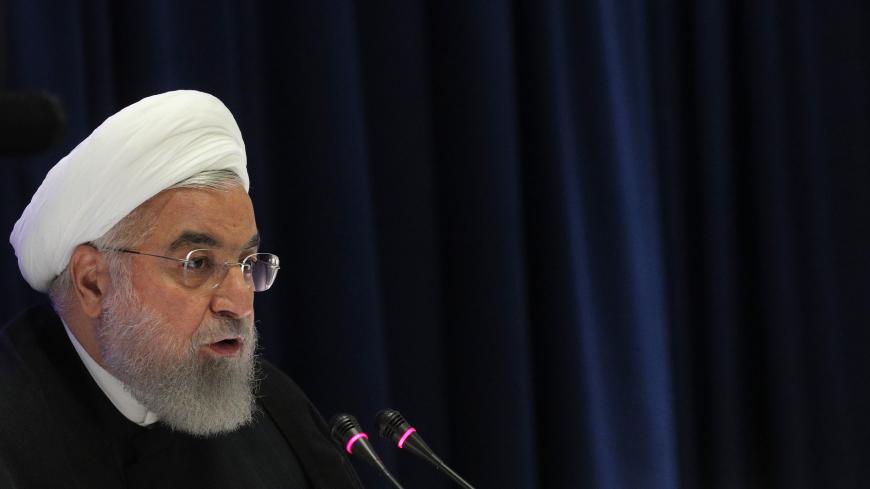 The recent exchange of prisoners between Iran and the United States has convinced some observers there is still hope for Tehran-Washington dialogue, but the road seems to be pretty bumpy.

In 2013, newly elected President Hassan Rouhani rose to power as he promised Iranians to put an end to US-Iran tensions over Iran’s nuclear program. His chief negotiator, Mohammad Javad Zarif, had the political system’s permission to negotiate with the United States, but no authority had been granted to Rouhani to talk with then US President Barack Obama on the phone — a 20-minute conversation described by Rouhani as “a very powerful locomotive for the negotiation train.” What led Rouhani to make this courageous decision while knowing he would face a hard time at home was his confidence that the Iranian public and most of the political groups were fully behind him, resulting in the establishment not being able to oppose Rouhani since the cost of such an approach against him had risen steeply.

Everything has changed now, especially after the widespread protests across the country that led to more than 200 deaths — and the outcome is crystal clear: Rouhani has lost his social capital and the political groups standing behind him, while the hard-liners have ridden the waves of anger against him. Therefore, any chance of Rouhani succeeding in de-escalation and winning an agreement over the nuclear deal and sanctions with the United States is unlikely.

In September, Rouhani and Donald Trump were extremely close to a deal that, according to a source speaking to Al-Monitor on condition of anonymity, would allow Europe to purchase one year of Iranian oil to a great extent on behalf of China and India. However, Tehran and Washington had a disagreement over the period of the waivers, as Rouhani had called for a one-year oil waiver and the purchase of 1.5 million barrels of oil per day; Trump had insisted on a six-month oil waiver and 1 million barrels per day.

According to the source, in the end, while the two sides were getting close to the deal, they hit another hurdle: the bilateral meeting. Rouhani asked for a declaration of lifting the sanctions and the oil waiver before the photo-op with Trump, while the US president had stated he would announce it in the middle of the meeting. Finally, Rouhani stated this wouldn’t work, as they may not reach an agreement with each other in the meeting — and in such case, this could turn out to be costly for him and Iran.

Meanwhile, a diplomatic source playing a significant role in the initiative by French President Emmanuel Macron to appeal to both sides told Al-Monitor there is currently no chance for a Rouhani-Trump deal, as Trump is busy with the impeachment process in the US House of Representatives and his 2020 re-election campaign. Also, Iran is nearing its parliamentary elections, which would put Rouhani in hot water.

Surprisingly, on Dec. 7, Tehran and Washington reached an agreement to exchange prisoners with the help of Switzerland, leading to the emergence of new hope. Nosratollah Tajik, an Iranian diplomat who spent six years under house arrest in the United Kingdom and was released following Oman mediation in 2012, told Al-Monitor, “For sure, the prisoner swap deal wasn’t decided solely by the government [of Iran]. In fact, the political system has definitely played a significant role in this.” Tajik added, “I believe that humanitarian issues are the best points for the beginning of a de-escalation. In the '70s, the ping-pong diplomacy worked out, and in 2019, a prisoner swap agreement could act as the solution.”

“If both sides are willing to continue this path, they should release more prisoners,” he said.

Nonetheless, Hossein Kanaani Moghaddam, a former Islamic Revolutionary Guard Corps commander and current political activist, said the exchange of prisoners has nothing to do with the nuclear deal and Iran-US negotiations. “It's been a while since Iran and the United States — by the mediation of Switzerland and some other countries — have been seeking the release of each other’s prisoners. This is still being pursued and is defined within a humanitarian issues framework," said Kanaani Moghaddam in an interview with Al-Monitor. He added, “This had nothing to do with negotiations and [the nuclear deal], but it seems like the United States and Trump want to take advantage of it.”

Nonetheless, retired Iranian diplomat Fereydoun Majlesi, who served in Iran's embassy in the United States before the 1979 Iranian Revolution, considers the prisoner exchange to be a positive sign. He told Al-Monitor Rouhani’s upcoming trip to Japan could be perceived in line with attempts for a deal with the United States. “Since Rouhani is not the one issuing permission for negotiations, his sudden trip to Japan — which is possibly with the aim of de-escalation — may show that Tehran may want to show some flexibility," Majlesi said.

However, Kanaani Moghaddam said such outreach is being orchestrated by a number of people in Rouhani’s entourage who are in contact with US officials. “I think the best thing for Rouhani is to follow the resistance policy of the Supreme Leader [Ayatollah Ali Khamenei]. For sure, without any decision by the Leader, Rouhani has no right to do anything regarding the United States, but I think some people in Rouhani’s inner circle are in dialogue with Americans to revive the [nuclear deal]," he said, adding, “As far as I know, no authority or permission has been given for negotiation with the United States through a Japan channel.”

Reform-minded Tajik believes “Iran and the United States can't be enemies for eternity,” but he adds the prisoner exchange deal wouldn’t act as “a powerful locomotive for the negotiation train of Iran-US talks.”

He said, “There is a potential, but it is highly far-fetched since Trump is the US president. He isn’t even focused on changing Iran’s behavior anymore. Instead, he is concentrated on economic pressure with the aim of the Iranian people rioting against the political establishment.” This is a view reiterated by conservative Kanaani Moghaddam, who said, “The US campaign for causing chaos in Iran will persuade us not to show any ‘heroic flexibility.’”

In sum, it seems Trump’s heightened pressure campaign and Rouhani’s losing his support base are both helping the radicals in Iran, the United States and the region see their goal realized, which is the prevention of a deal between Tehran and Washington — especially during the presidency of pro-West Rouhani.