Have Iran, US slammed door on nuclear negotiations?

Iran and the United States both have upcoming elections and other urgent domestic issues to focus on, and neither seems interested in cooperating on nuclear talks. 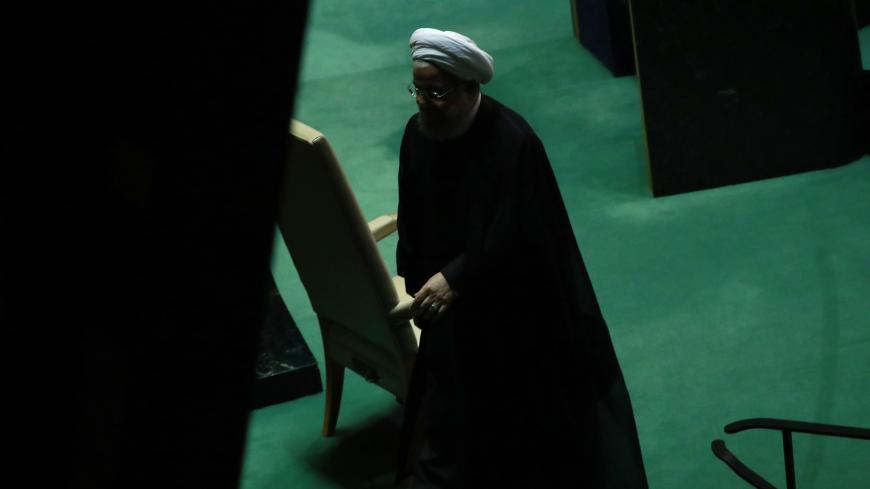 It could be a long while before Tehran and Washington cross paths again — at least in positive terms.

Despite efforts by several world leaders to get the presidents of Iran and the United States together on the sidelines of the recent UN General Assembly session in New York, no such meeting took place and no improvements were made in the tense situation between Tehran and Washington.

As Iranian President Hassan Rouhani arrived in New York for the Sept. 17-30 session, there was increasing speculation that something could potentially happen between him and his US counterpart, Donald Trump. This speculation prompted Iran’s hard-liners to warn Rouhani, both before his departure and while he was in New York, that if such a meeting were to take place, he would pay a heavy political price once he returned.

However, Trump’s speech on the first day and his harsh words regarding Iran ended all hopes for any developments for the near future. Trump’s tone even led Rouhani to change his speech. An informed source in the Iranian administration who spoke to Al-Monitor on condition of anonymity said, "We foresaw that the US president would be unpredictable. Therefore, despite the positive signals we had received from some European countries before President Rouhani’s departure for New York, we waited to see the behavior and policies of Trump himself."

The source said, "When Trump delivered his harsh and insulting speech against Iran, [Rouhani] decided that some parts of his speech should be changed. ... Our belief that Trump was only after a political show and not negotiations turned into certainty."

Rouhani left New York without any positive developments to reduce tensions between Iran and the United States and little prospect for any in the near term.

With Iran’s 11th parliamentary elections approaching in February, domestic politics are soon expected to dominate foreign policy issues, especially as Rouhani and the Reform movement face increasing criticism from hard-liners over the government's performance. Meanwhile, as many pro-Reform supporters favor not participating in the elections at all, the hard-line conservatives see participation in the polls as their religious duty. Indeed, strong conservative turnout is expected to pave the way for changing the political texture of Iran’s parliament, which would sideline even the idea of dialogue with the West yet further.

This is in addition to the United States also gearing up for its November 2020 presidential election process.

Trump’s insistence on pursuing a “maximum pressure” policy until the opposing side surrenders before even starting negotiations or providing any incentives shows he is not aware of the history of Iran-US relations. Tehran’s immense lack of trust has cast a shadow over the two countries’ relations during the past four decades. Although the 2015 Joint Comprehensive Plan of Action (JCPOA) nuclear deal was able to improve the situation to some degree, Trump’s decision to leave the deal in May 2018 deepened the distrust once again, not only with Iran’s hard-line groups but also among those normally in favor of close relations with the West.

Given Iran’s current political atmosphere, even the most optimistic Reformists have accepted that their share in Iran’s next parliament will significantly decrease. Hard-liners will lose no opportunity to attack Rouhani’s policies of negotiating with the West. Thus, it seems that the window of opportunity for talks between Tehran and Washington has closed, at least until after the next US presidential elections.

Iranian pro-Reform journalist and political analyst Saeed Laylaz told Al-Monitor: “I think the US should return to the JCPOA. There is no other way than this because its main issue is with China, as well as emptying the pockets of Arab countries under the excuse of an Iranian threat. Iran’s [overall] situation will [improve] in a few months. We have to strengthen our economy and at the same time, not enter negotiations under pressure."

Laylaz added, “In my opinion there should not be a rush to enter negotiations. The other side has not shown a serious intent for talks. Therefore, any negotiation with the US will not only be useless but also dangerous.”

It seems the predictions by Iranian Supreme Leader Ayatollah Ali Khamenei — who repeatedly described negotiations with the United States as useless and said Europe would not adopt an independent approach toward Iran —- have turned out to be true.

Even proponents of the Rouhani administration are starting to lose hope in Europe’s efforts to resolve the JCPOA crisis and achieve tangible results. Now it seems even the most optimistic Iranians believe Tehran should leave the JCPOA.

Alireza Akbari, Iran's former deputy defense minister, told Al-Monitor recently, “It seems the US administration does not have the necessary will and capacity to reach a bilateral agreement. Both Trump and his administration do not have a correct understanding of the situation, the necessities and the road leading to an agreement with Iran.”

Akbari, an expert on security and military issues, added, “Iran’s leaders have announced that if the Trump administration returns to the state of affairs of two years ago, there's no reason for Iran not to enter a more comprehensive negotiation" with the United States and the other countries involved in the nuclear deal — Russia, China, Britain, France and Germany. "In the current situation, however, it seems that Trump is more after a photo-op and not a ‘solve and finish’ diplomacy.”

Perhaps one should accept that there will be no progress between Iran and the United States before the 2020 US elections. Of course, there's no guarantee that anything significant will happen after that time, either. But perhaps if a new US president comes to office or Trump changes his approach toward Iran, a change will be seen in the current status quo.

Meanwhile, tensions in the region continue to intensify and warnings of a potential conflict have reached an all-time high. The downing of a US drone, attacks on Saudi oil facilities and the seizure of tankers in the Persian Gulf and the Gulf of Gibraltar in recent months all indicate that the Middle East is more volatile than ever. This lack of security —- a product of Washington's withdrawal from the JCPOA — has turned the region into a grenade that is ready to explode.