Most Iranians, with the exception of some hard-liners, praised President Hassan Rouhani for his speech at the UN General Assembly. 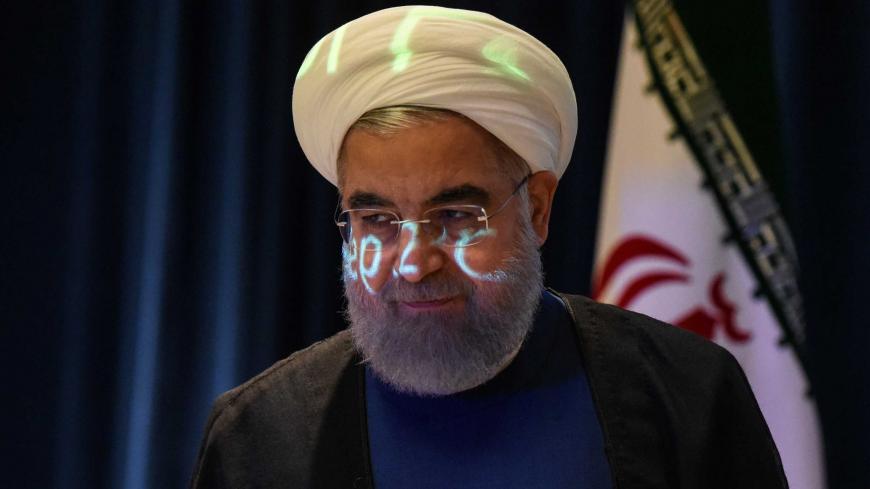 A video projection is seen on the face of Iran's President Hassan Rouhani as he arrives for a news conference during the United Nations General Assembly in New York, Sept. 20, 2017. - REUTERS/Stephanie Keith

In his Sept. 20 speech at the UN General Assembly, Iranian President Hassan Rouhani responded to his American counterpart Donald Trump’s speech against Tehran by defining “moderation,” which has long been his key campaign slogan.

Trump’s Sept. 19 UN speech received extensive coverage in Iran, and many Iranians sat down to watch his speech as they were expecting a negative decision to be announced by the US president regarding the nuclear deal that was achieved between Tehran and P5+1 (the United States, the UK, France, Russia, China and Germany) in 2015. The harsh remarks of Trump led Iranians to eagerly anticipate their president’s speech at the UN more than in the past. Meanwhile, Iranian hard-liners — who believe that Rouhani’s foreign policy of developing ties with the world, including with the United States, is wrong — sought to take advantage of the tensions stemming from Trump’s speech, asking Rouhani to answer the US president in at least equally bombastic fashion. Indeed, moderates and Reformists were worried that Rouhani would pursue the hard-liners’ approach, which was believed to be in the interest of anti-Iran politicians in the United States.

The moment of truth came Sept. 20. Declining the hard-liners’ suggestions, Rouhani addressed the UN diplomatically, avoiding the use of insulting words. Instead, he took subtle swipes at Trump, emphasizing Iran's having long conquered the world through its culture and poets rather than guns and bullets.

Sadegh Zibakalam, a prominent pro-reform analyst, wrote in the government-run “Iran” daily Sept. 21, “The hard-liners, opponents and critics of Mr. Rouhani in Iran had pressured Rouhani to respond to Trump’s boldness and insults with [even] worse cursing. …But Mr. Rouhani’s tone poured cold water on all their expectations of insidious curses and insults [in response] to Trump’s remarks.”

Zibakalam concluded, “Mr. Rouhani’s speech was completely different from that of Trump. He not only was unwilling to adopt Trump’s same tone and language, as the hard-liners expected; on the contrary, he spoke very diplomatically, moderately and conciliatorily."

Indeed, Rouhani’s speech was welcomed in Tehran to the extent that even a number of conservatives, who most of the time attack the Iranian president for his perceived soft tone in the face of the West’s “bullying,” ended up praising him. Hamid-Reza Moghaddam-Far, an ultra-conservative figure, said Sept. 21, “Mr. Rouhani gave a logical and respectful speech while showing a response to Trump’s remarks. Today, world public opinion can judge very well between the language and logic [of Rouhani and Trump].” Ezzatollah Zarghami, a conservative and former head of Iran’s state TV broadcaster, wrote on his Instagram page Sept. 21, “I consider Rouhani’s UN speech as good and positive. … There is no good or bad US president for Iran. Trump’s position and behavior are the reality of America without any retouch[ing].”

In this vein, hard-line Raja News wrote Sept. 21, “The speeches of Trump and Netanyahu were highly ideological, contrary to the unconstructive, baseless and predictable speech of Hassan Rouhani at the UN General Assembly.”

Raja News added, “Trump and Netanyahu spoke simply, clearly and colloquially and excited the attendees in the best possible way. But Rouhani’s formal and boring text, which was seemingly prepared for an electoral campaign, bored himself ahead of others. Unlike the determined and energetic faces of Trump and Netanyahu, Rouhani’s face wasn’t happy. Hassan Rouhani hadn’t come to make history.”

In other news, Iran’s Supreme Leader Ayatollah Ali Khamenei reacted to Trump’s UN speech in an address before the Assembly of Experts.

“These words were not triggered by a sense of power, but by anger, helplessness and imbecility, because the US government has become increasingly angry and dissatisfied that plots they initiated several years ago in Western Asia were neutralized due to the effective presence of the Islamic Republic of Iran,” said Khamenei Sept. 21.

He added, “The speech presented by the American president did not make Americans proud. The educated American elite must feel embarrassed for having such a president.”